To Be A Bee

Bumblebees are the UK's favourite insects, according to a recent public poll. As well as being popular, bees have surprisingly advanced cognitive abilities, writes Felicity Muth.

When I introduce myself as a bee cognition researcher, one of the first things I hear – aside from "do you get stung a lot?" – is "bees have cognition?" I don't take this question literally, because if bees have no cognition, I've made a terrible mistake researching it for the past three years.

Bees actually have diverse and impressive cognitive abilities that people have studied for more than 100 years. In the early 1900s, Austrian scientist Karl von Frisch won the Nobel Prize for his work with honey bees (Apis mellifera). He is perhaps most famous for his research on bees' remarkable ability to communicate through the waggle dance. However, von Frisch also showed for the first time that honey bees have colour vision and can learn the colours of flowers.

From this pioneering work, scientists have discovered that honey bees and bumblebees have numerous abilities. With the continuing decline of bumblebees and other bee species, the more we can understand how these animals perceive, learn about and process their world, the better chance we have of arresting this decline. What's more, many of their abilities are comparable to those of mammals and even humans, making bees a useful model for addressing cognition more broadly.

Before delving into the cognitive abilities of bees, it's important to think about what kinds of abilities bees might need, given the environment they live in. Bees are generalists, which means they don't have to just visit one particular flower type for food (nectar and pollen), but can instead visit hundreds of different kinds. However, not all flowers are the same.

They can vary in how good their nectar and pollen are, and whether they have both of these food types or only one. Further, some flowers actually offer no food to bees at all, such as orchids which 'trick' bees into pollinating them. Bees make thousands of trips to flowers a day, as they are finding food for their colony as well as for themselves. A foraging bee will visit a handful of flowers, drinking nectar and packing pollen on to her legs (all worker bees are female).

She then returns to her colony, regurgitates the nectar, which becomes honey, and takes off her pollen loads. The honey and pollen are then fed to bee larvae by other worker bees. Therefore, if a bee wants to make sure she's getting the best food out there for her colony, she needs to rapidly learn which flowers have the best rewards (nectar and pollen) available.

To do this, when visiting a flower, a bee pairs particular features of the flower – its colour, scent, shape and so on – with the rewards it gives.

Just as Pavlov's dogs learned that the sound of a bell predicted food, so bees learn that certain features of a flower predict nectar. They can do this extremely rapidly – in some cases, in just a single visit to that flowe Bees can also learn which flowers are the best in comparison to others. For example, a bee might land on one flower, collect some nectar and then leave and land on another flower of a different species and discover better nectar there. She would then not only learn to visit the second species of flower, but also to avoid the first species in preference to finding the second.

When you start to think about all the flowers that are out there, how different they look to each other and how they might differ in the quality of nectar, pollen or other rewards they offer to bees, you can start to appreciate just how impressive it is for a bee to learn and remember all of these various associations.

Bees have other cognitive abilities, too. For example, bumblebees can learn the time it takes for flowers to replenish their nectar. They can also learn certain rules – for example, to alternate between two different flowers to get a nectar reward. However, one of bees' most impressive abilities is forming abstract concepts about the world. In other words, they can understand a general fact about the way things are and apply that fact to new situations.

Understanding the concept of 'same'

The idea that bees can understand concepts such as 'same' and 'different' was shown in a clever experiment where honey bees were trained to react to a particular colour of flower – say, blue. When they were later given a choice between blue and yellow, blue always had nectar, whereas yellow did not.

The bees were then trained to recognise that yellow flowers yielded rewards and they should choose them.

Therefore, a given bee always had to go to the same colour as the one she had previously seen to get the reward. The bees learned this without much difficulty. However, at this stage, it was not definitive whether the bee had learned the concept of 'sameness' rather than just a rule for this one situation – that is, 'I go to yellow to get a reward when I see yellow and I go to blue to get a reward when I see blue'.

To test whether the bees had actually learned the concept of 'same', the researchers presented each of them with a new stimulus.

This time, it was a pattern: black and white horizontal stripes.

When the bees were then given a choice between a black and white striped horizontal pattern or a vertical pattern, they chose the one they had seen before (in this case, the horizontal stripes).

This ability even transferred across different modalities: when bees were trained to go to the same scents but were then presented with a colour, they went to the same colour.

When bees were trained to go to a different stimulus rather than the same one, they also mastered this. 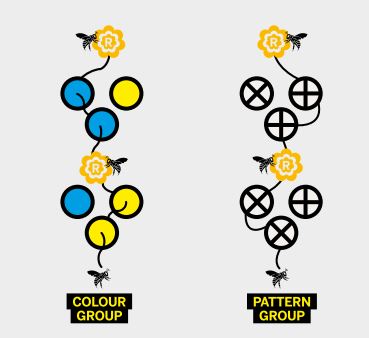 When colours were replaced with patterns, the bees were able to transfer their understanding of how to get a reward.

As humans, we form abstract concepts about the world all the time, generalising from one situation to another. Take, for example, the concepts of 'sameness' and 'difference'. If we were having dinner together and I asked you if you would like 'more of the same', you would understand that if we had just been eating pasta, that I was offering you more pasta. If we were operating on someone and I asked you to pass me the 'same instrument as before', you'd pass me whatever instrument I used last time we did that operation. Therefore, you have the ability to take the concept of 'sameness' and use it in different situations. Experiments have shown that bees can also form concepts of 'sameness' and 'difference'.

Research on bee cognition has mainly focused on bees' ability to learn about flowers based just on nectar rewards – perhaps in part to simplify the more complex reality where flowers offer a suite of different types of reward to bees, including other things like pollen.

In Anne Leonard's lab at the University of Nevada, Reno, I study how bumblebees – in particular, the common eastern bumblebee (Bombus impatiens) – learn which flowers have nectar and which have pollen while they are out foraging for both resources.

We found that bees do indeed learn associations between the colour of parts of the flower (the petals and anther) and pollen, and can even learn specific colour combinations of these features. We also found that bees can learn to go to one flower colour (e.g. blue) to find nectar and another (e.g. yellow) to find pollen, so they were capable of learning about these two very different rewards at the same time.

However, just like us, there are limitations to the number of things they can learn at once, and collecting more than one item at a time from different flowers can lead to confusion. From our research, we hope to learn more about bees as well as how all animals cope with learning about multiple rewards.

'Basic' or 'blue skies' research is often thought of as less useful than research that sets out to solve a specific problem. With the ongoing decline of bumblebees and other bee species, and their importance to our agriculture and ecosystems, targeted research is essential – for example, looking at the effect of neonicotinoids on bee physiology and behaviour. However, just as necessary is comprehending the fundamentals of how these animals perceive, learn about and process their world. Without a fundamental understanding, it will be harder for us to predict how bees will cope with a changing environment.

Felicity Muth is a postdoctoral researcher investigating animal behaviour and cognition at the University of Nevada, Reno. She blogs about animal cognition for Scientific American.