Survival of the smelliest

Pheromones play a key role in many areas of animal behaviour. But how did they evolve? Tristram Wyatt explains how smells became signals

The powerful smell produced by male goats is notorious. But while most of us don't find it attractive, female goats find it highly alluring. The male pheromone sets her hormones racing. Charles Darwin proposed that the smells produced by mammals, such as male goats, could have evolved by sexual selection "if the most odoriferous males are the most successful in winning the females, and in leaving offspring to inherit their gradually perfected glands and odours".

In The Descent of Man, and Selection in Relation to Sex, Darwin described many examples of smelly males in the breeding season, including pythons, elephants and even musk ducks. He reported: "During the season of love, a musky odour is emitted by the ... glands of the [male] crocodile, and pervades their haunts." He also noted that male moths had a distinctive smell, but these chemical signals, like those of mammals, were invisible.

It was not until the 1950s that they could be identified.

Pheromones are chemical signals used for communication between members of a species. Since the first chemical identification of a pheromone – the female sex pheromone of the silkmoth, bombykol, in 1959 – pheromones have been identified in species all across the animal kingdom[1].

While sex pheromones bring the sexes together in many species, pheromones mediate every aspect of animal behaviour, depending on the species. For example, rabbit pups find the nipple by responding to a mammary pheromone produced by the mother, communication vital for speedy and successful suckling[2]. Bark beetles release aggregation pheromones to attract many other individuals (of both sexes) in order to overwhelm a tree's defences.

Social insects are perhaps the supreme chemical communicators: it has been argued that the path to sociality was paved with pheromones. All aspects of social insect behaviour are mediated by pheromones, including trails that enable sophisticated collective behaviour by foraging ants, and alarm pheromones to gather colony members for mass defence.

An eclectic range of molecules are used as pheromones in different species, which suggests almost any molecule can evolve into a pheromone if it gives a selective advantage. Some patterns are explained by whether the signal is transmitted in air or water; others result from the ways molecules become co-opted as they evolve into pheromones. If the message is transmitted in air, then pheromones tend to be small, volatile molecules, such as 2-methylbut-2-enal (C5H8O), the rabbit mammary pheromone mentioned above.

Underwater, the equivalent of volatility is solubility, so pheromones can be small, soluble molecules such as amino acids or large, polar molecules. For example, the sea slug Aplysia uses the wonderfully named soluble proteins attractin, enticin, seductin and temptin as parts of its sex pheromone.

From smells to signals

There appear to be two main ways that particular molecules become co-opted and evolve as pheromones. The first way starts by receivers eavesdropping and detecting a chemical cue. This appears to be how hormones leaking from female goldfish became sex pheromones.

A second way starts with a pre-existing sensitivity in the receiver that is exploited by the signaller. Female beewolf wasps (Philanthus triangulum) detect their honeybee prey by the (Z)-11-eicosen-1-ol they give off. The male beewolf produces this molecule as his sex pheromone, thus tapping into a pre-existing sensitivity in the female. Similarly, male moth pheromones released in the final stages of courtship seem to have evolved to mimic the host plant odours detected by female moths to locate suitable plants on which to lay their eggs.

In small social insect colonies, of species such as Polistes paper wasps, the queen can physically dominate her tens of subordinates into helping her rather than laying eggs themselves. In species with huge colonies of thousands or hundreds of thousands of individuals, only queen pheromones can pass a message throughout the colony to signal that the queen is fertile, healthy and laying eggs. The queen pheromone induces the daughter workers to remain sterile.

Recent evidence suggests that queen pheromone molecules may be similar long-chain hydrocarbons in bees, wasps and ants[3], despite each lineage having evolved independently from solitary species. The explanation may be that the social insect queen pheromones have evolved from an ancestral signalling system already present in the earliest common hymenopteran solitary ancestors. The role of the signal in these ancient solitary species may have been as a sex pheromone only produced by fertile females that has been co-opted independently in each lineage for a new function when sociality evolved.

Many accounts of pheromones focus on the fact that they only attract members of the same species. How, then, do these signals change during speciation as new species evolve? With a peptide pheromone, it is possible to create a new pheromone just by mutations leading to substitution of a couple of amino acids. This has happened with the male sex pheromone decapeptide in a pair of closely related newt species, Cynops ensicauda and C. pyrrhogaster in Japan[4].

However, most pheromones are combinations of relatively simple molecules, and it is the combination that gives specificity. During speciation, there is selection for changes in the combination. For example, the female sex pheromones of moths typically consist of blends of five to six hydrocarbon molecules in the form of unbranched fatty acids, alcohols, acetates or aldehydes.

Small changes in enzyme specificity, or upregulation of some enzymes in the biochemical pathway for pheromone production, are sufficient to change the blend or lead to the production of new molecules for the blend[5](see figure 1, below). The changes may involve a few or many different genes.

Males of a moth species will only respond to the correct combination of molecules in the right ratios – they thus avoid flying to females of the wrong species. However, there is just enough variability in male response that a few males will respond to new ratios or molecules as changes in blend occur during speciation. 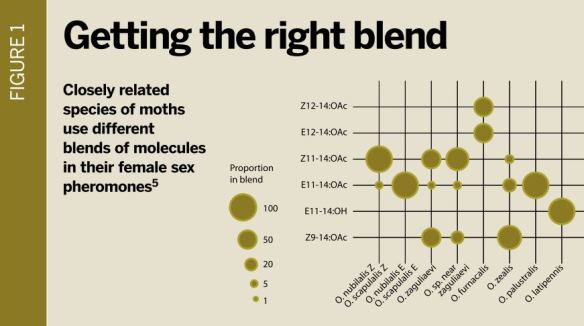 Fig1: Different blends of chemicals in the sex pheromones of related species of moth

Change in the specificity of male pheromone receptors also occurs during speciation. In the European and Asian corn borer moth species, Ostrinia nubilalis and O. furnacalis, a change of one amino acid in the binding site of the male's pheromone receptor has been enough to change which molecule the receptor binds to [6]. Changes in the wiring of the brain circuits of the male may also need to evolve, completing the switch to responding to a new blend.

When Californian entomologists put out traps baited with bark beetle aggregation pheromones, they were expecting to catch lots of bark beetles. What they didn't expect was that they would catch 600,000 predatory beetles as well.

Pheromone conversations within a species can be detected by unintended spies: the predatory beetles have evolved to be just as sensitive to their prey's pheromones. In some parts of North America, this predation has led to selection on bark beetles with a different aggregation pheromone blend that helps them avoid attracting the predatory beetles.

Pheromones can also be mimicked by deceptive signallers, such as female bolas spiders, which lure male moths by producing a counterfeit blend that mimics the pheromone produced by females of that species. One bolas spider species even produces different blends to lure males of different moth species [7].

Instead of rewarding pollinating insects with nectar, some orchids mimic the female of a particular species of solitary wasp or bee, luring the male with counterfeited sex pheromones and visual mimicry [8]. The male insect attempts to mate with the flower, picking up a pollen capsule, which he will deliver like a flying DNA courier to another orchid flower of the same species, having made the same mistake again.

We spend billions of pounds every year on products to remove our smells and about the same amount on perfumes to add new ones. As we are smelly, like other mammals, it is possible (perhaps even probable) that we have evolved pheromones. In the 1990s, a corporation patented the molecules androstadienone and estratetraenol as 'human pheromones', although to date there is no scientific evidence that such molecules operate as pheromones in humans [9].

Despite the lack of evidence, numerous studies have used these molecules. It is hard to escape the conclusion that the results represent false positives. It may turn out that we do not have sex pheromones after all. More promising is work on a possible pheromone released around their nipples by lactating mothers that prompts newborn babies to suckle [2]. If a mammary pheromone is found and identified, it would give us the confidence to explore what other pheromones we might have.

Tristram Wyatt is a researcher at Oxford University's department of zoology and an emeritus fellow of Kellogg College, Oxford. He wrote Pheromones and Animal Behavior, which won the Society's postgraduate textbook of the year in 2014.