Understanding how diatoms create their amazingly intricate shells could revolutionise a range of industries, from nanotechnology to computing. However, despite massive interest, the process remains deeply mysterious, as Tom Ireland explains

Diatoms have fascinated people since the invention of the microscope. These single-celled organisms are often called 'algae in glass houses' or 'jewels of the sea' due to their ornate silica outer shell, known as a frustule.

Frustules are not only beautiful, but are a miracle of nature's engineering. Each of the hundred thousand or so species of diatom has a frustule with a specific pattern of pores, grooves and other 3D structures, formed at a scale far finer than any existing human technology could make. Many of these micro- and nanoscale features have interesting chemical, mechanical and optical properties.

It is for this reason that diatoms have been attracting the attention of scientists from many applied fields – including nanotechnology, materials science, engineering, and even computing – since the early 2000s.

"Over the last 10-15 years, scientists have started to realise diatoms are actually a rich source of nanopatterned micromaterials," says Nils Kröger, professor of biomimetic materials at the University of Dresden. His lab engineers diatoms with enzymes and other functional groups embedded within the 3D structure of their silica frustule.

"You can get the diatom to do the job not only of making the enzyme for you, but also sticking it to the silica substrate for you – a process scientists try to do all the time synthetically."

Diatoms' properties also make them excellent molecular filters, with pores allowing molecules of only a certain size through, or drug delivery vehicles[1] (some are literally 'pill-box' shaped). Their ability to exhibit photoluminescence has been used to create ultra-sensitive gas detectors[2] and antibody-based biosensors[3], and their light-focusing properties have been used to optimise solar panels[4].
However, diatoms' most exciting ability is the formation of unfathomably tiny silica structures directly in 3D. Existing nanofabrication technology involves painstakingly etching shapes or building up material in layers.

This self-assembling nanotechnology is not only more precise than existing technology, but it only needs sunlight, seawater and CO2 to grow. Diatoms will double in number around once a day in ambient temperature and pH. They are, in effect, environmentally friendly, self-assembling 3D nanoprinters that can be grown en masse at very low cost.

"There are now more than 100,000 papers on diatoms, and the number is doubling every 10 years," says Richard Gordon, a theoretical biologist and diatom expert currently volunteering at the Gulf Specimen Marine Laboratory & Aquarium. "Like diatoms, we diatom researchers seem to be growing exponentially." 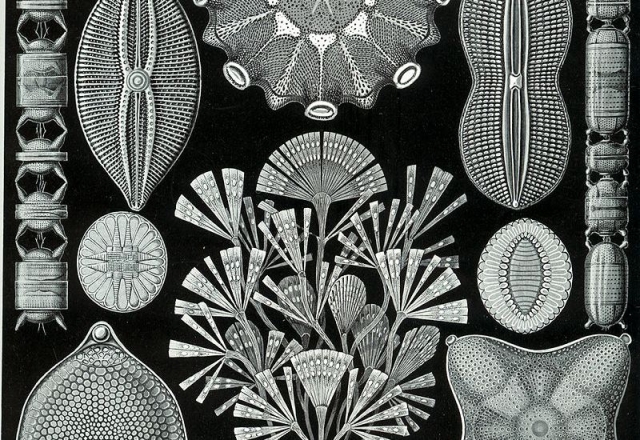 The Holy Grail of diatom research is to understand how inorganic silica is deposited with such precision and how the diatom's genome controls this process. These 3D morphologies could perhaps one day be precisely controlled through DNA modification, allowing the design of novel 3D nanostructures, materials or devices.

Interest from industry is "inadvertently contributing to the solution of one of the major outstanding problems of biology," Gordon wrote in a 2009 review of the field. "Namely, the possibly reciprocal relationship between the linear, sequenced genotype and the chemistry and physics of the multidimensional phenotype." It's a fascinating case of commercial research aiding the fundamental. 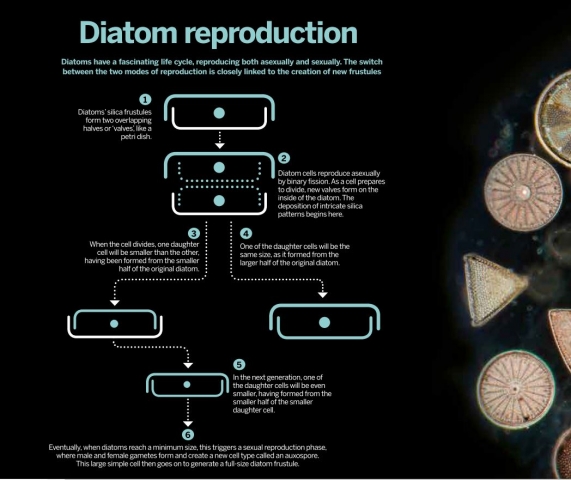 The life cycle of diatoms is closely linked to formation of new frustules. Click image to enlarge

The diatom frustule is made of two halves (valves), one of which fits inside the other. A new half is formed inside the cell as it prepares to separate in two (see 'Diatom reproduction', above). Silica formation is thought to take place within special intracellular compartments known as silica deposition vesicles (SDVs), which are found in other silica-producing organisms such as sponges, synurophytes and radiolarians.

Microtubules in the cell's cytoskeleton are thought to guide the silica into position on an inner membrane, and appear to be involved in the selective thickening of the valve as it grows over several hours.

"So far, no one has imaged the microtubules so you can see their position, other than that they radiate out," says Gordon. He hopes to use fluorescent labelling to track the shifting position of the microtubules, microfilaments and the many other cellular elements involved.

Biochemical analysis has suggested a range of chemicals may help create the precise 'nanopatterning' of the silica as it is deposited. For example, the extraordinary patterning found in the genus Coscinodiscus may develop when polyamines form microdroplets within the silica, creating a honeycomb shape in the silica[5]. This structure can then be split into even finer microdroplets and silica patterns by further iterations of the process. However, silica-starved diatoms suggest a branching pattern grows out from the centre and later, if enough silica is available, forms the honeycomb pattern.

Gordon hopes the unusual life cycle of the diatom might be able to shed more light on frustule formation, too. Diatoms reproduce primarily asexually, by binary fission, with each daughter cell receiving one of the parent cell's two frustules and growing another on the opposite side (see 'Diatom reproduction', above).

Due to the overlapping shape of the two halves, some diatoms in each successive generation keep getting smaller. Eventually, when the cells reach a minimum size, they reproduce sexually, producing male and female gametes that fuse to form a larger, spherical cell called an auxospore. This then goes on to become a full-sized diatom once again. (This unique life cycle causes headaches when trying to grow a genetically identical culture of diatoms.)

"Some people have wondered if the shape of the new frustule gets transferred to the daughter cells from the mother cell," says Gordon. "But that can't be the case, as the mother itself once came from an auxospore, a cell that has a much simpler outer structure.

"In a few generations you have the original diatom form again. So we have a chicken and egg situation there. But we may be able to follow the morphological process as the auxospore progresses."
While the exact mechanism remains elusive, scientists have developed a method for converting the entire diatom frustule into other materials such as gold, silver, magnesium oxide and carbon, retaining the shapes and most nanosize features of the original templates.

"You can do atom-for-atom replication, replacing the structure with another material. You could make the frustule structures pure carbon or silicon." This has recently been done by Zhihao Bao and colleagues[6], who have thus pioneered the production of small silicon devices that may some day be used to enhance computing. Finer silicon structures equals greater processing speed.

Gordon estimates that $50–100m has been spent on researching applications of diatoms, but hardly any commercial products exist besides relatively low-tech uses in filters and abrasives. He hopes solving the riddle of how diatoms make their ornate 'glass houses' will finally catapult diatoms into the biotech spotlight.

"It is an open and fascinating question, and it is solvable," he says.