The mysteries of milk

Far from being an easily synthesised mixture of nutrients, breast milk contains a multitude of microbes, stem cells and biological molecules that scientists are still trying to understand. Dr Natalie Shenker MRSB explores what we do and don't know about the white stuff

After 70 years of cultural shift in the West towards babies being bottle-fed formula milk rather than breastfed, one of the prevailing views in the general population is that there is no difference biologically between breast milk and formula.

This view is also held by a large number of doctors and healthcare professionals, propagating myths about common breastfeeding issues as being reasons to stop and "just give formula". For example, if a medication is to be prescribed and there is no available information about the transfer of the drug or its metabolites into breast milk, women are often advised to stop breastfeeding to be on the safe side.

This is contrary to the reality that breastfed babies are at lower risk of infections, obesity and haematological malignancies[1]. In preterm and sick babies, breast milk is critically important to prevent infections and necrotising enterocolitis (NEC), a catastrophic gut condition that carries a mortality rate of 40%.

Some states in the US have taken the radical step of banning the use of formula on neonatal intensive care units.

For mothers, the benefits of breastfeeding are well established. It is classified by the World Cancer Research Fund/American Institute for Cancer Research as protective against breast and ovarian cancers[2]. Breastfeeding for even a short amount of time reduces risk by 16–24% for triple negative breast cancer, the most aggressive form of the disease[3,4].

An estimated 18% of ovarian cancers in the UK are linked to women breastfeeding each of their children for fewer than six months.5 According to several meta-analyses, ovarian cancer risk is 24–30% lower in women who have ever breastfed, versus those who have never done so[6].

The risk of both cancers is reduced even further in women with high-risk genetic mutations such as BRCA[1]. Women who breastfeed have lower chances of developing type 2 diabetes later in life[7], obesity[8] and cardiovascular disease, as well as a reduced likelihood of postnatal depression[9].

What is it about maternal milk that can explain this diverse impact on maternal and infant health?

Breast milk contains thousands of different molecules, growth factors, hormones, microorganisms and cells, which work together to provide the human baby with all the tools necessary to grow and develop normally. Many of its components have only recently been discovered – leaving the tantalising possibility that more remain – and the functions of many remain unknown.

Carl Linnaeus, the founder of taxonomy, originally used the word 'Mammalia' ('mamma' is Latin for breast) to describe animals that feed their young with milk. Evolutionary biologists estimate that the ancestor of all mammals lived 310 million years ago and oozed milk from its skin for the young to feed on after hatching from eggs. Over time, these skin glands evolved into nipples as a way to deliver the mother's immune system to newborns to protect them from infections. Food might have been a secondary benefit.

This immune protection covers the vulnerable period of early life when the immature immune system is not well developed – in humans, the immune system is thought to be fully mature only at the age of six. The breast itself is a source of specific immune cells and can, therefore, be seen as an immune organ, although it is never listed as such in medical textbooks. One hypothesis regarding the benefit of breastfeeding to mothers is that the breast also ramps up the mother's own immune system to aid postnatal recovery. 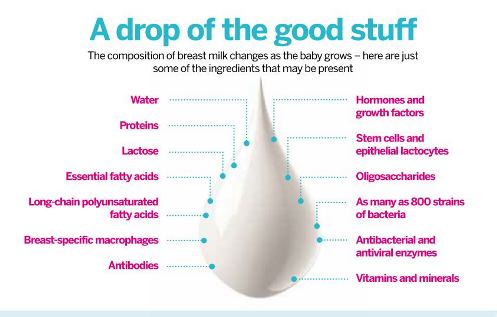 Breast milk contains a multitude of human and non-human cells as well as nutrients, hormones and other immune system-related components.

Human milk has evolved to specifically nourish human babies. Hundreds of bioactive components directly protect them from pathogens found in their environment.

Compared with other species, a higher proportion and diversity of fatty acids support the growth of the human brain (which is particularly large in comparison to that of other mammals), and an extraordinarily diverse microbiome (>800 bacterial strains on average, along with fungi, parasites and viruses) drives the healthy development of infant gut physiology. The composition of the breast milk microbiome changes over months and years, and work is ongoing to understand the impact this has on the developing gut.

Colostrum, produced within the first two to three days after birth, provides an energy-rich dose in just a few millilitres per feed, but also includes a dense cellular component made up predominantly of white blood cells. Of these, the most common cells are breast-specific macrophages, which can engulf and absorb harmful microorganisms.

These macrophages also manufacture lactoferrin and lysozyme. The former is an iron-binding protein that helps the baby to absorb and store iron. As well as being important nutritionally, this prevents the growth of harmful microorganisms such as E. coli, Staphylococcus species and yeast (Candida), which need iron to survive.

Lysozyme is an enzyme that kills bacteria by disrupting their cell walls and also has antiviral effects. Both it and lactoferrin increase in concentration in breast milk over time as babies become mobile and start to explore their environment.

The World Health Organization recommends that babies should be exclusively breastfed until approximately six months of age, with the introduction of complementary foods thereafter and weaning from breastfeeding after the age of two years. This has been widely interpreted as breast milk having no benefits (or even nutritional value) over the six-month cut-off. However, breast milk not only continues to provide increased immune protection to the child, but the calorie value per feed increases as the child grows, and so they need feeding less frequently[1].

Evolutionarily, the age of natural term weaning is likely to range from between two and seven years – hence the term 'milk teeth', which start falling out when children are around six or seven.

Antibodies produced by the mother, which are transferred into milk as well as to cells in breast milk, are highly targeted against infectious agents in her environment.

When a mother ingests or inhales pathogens, lymph nodes in the lungs and small intestine manufacture specially sensitised lymphocytes, which then migrate to the breasts and create tailor-made secretory antibodies against that pathogen.

These mucosal pathogens are a major killer of children below the age of five years, causing more than 14 million deaths annually. Diarrhoeal disease alone kills five million children each year in the developing world; the risk of dying from diarrhoea is reduced by approximately 20-fold in breastfed children.

Breast milk also contains more than 200 types of sugars known as oligosaccharides. Although most oligosaccharides have unknown functions, some help to block bacterial antigens from sticking to the wall of the gastrointestinal tract. This blocking mechanism is particularly effective against Pneumococcus, an extremely 'sticky' bacterium that can cause pneumonia and systemic sepsis. Twenty oligosaccharides in milk can't be digested by humans, but are there instead to feed the 'helpful' bacteria found in breast milk and the infant gut.

These bacteria will help the baby to form its own normal microbiome, to the exclusion of harmful pathogens. Scientists and doctors are starting to understand how the microbiome has a huge role in helping the gut to develop, digest food and support the immune system of the baby as it grows.

Indeed, the microbiome of maternal milk may be critical to helping the immature gut of a very premature baby to seal, preventing colonisation by pathogenic bacteria and reducing the likelihood of the development of NEC.

As new research begins to understand lactation, more surprising findings are emerging. Multipotent stem cells were discovered in breast milk in 2007, having the potential to form an entire functioning breast ductal system that can produce milk. Stem cells are carried into the infant stomach, where they potentially can survive the acidic environment.

Animal studies have shown maternally derived stem cells to be present in the brain and kidneys of infants, creating chimeras between the mothers and their offspring. In humans, we don't know yet whether these cells are simply by-products of the 10-fold increase in ductal stem cell cycling during pregnancy or have a specific function.

Mothers and babies are known to communicate with each other through breastfeeding in multiple ways – hormonally through surges of oxytocin (the 'hug' hormone) that create feelings of wellbeing and relaxation in the mother and stimulate the milk let-down reflex, through skin-to-skin exposure, and directly through components in the milk.

Babies are born without diurnal cortisol rhythms, which develop in the first few months of life. Breastfed babies have five-fold higher levels of cortisol receptors than formula-fed babies, reflecting the transfer of cortisol through milk, although the function of cortisol in this context is unknown – it is likely to be an important mediator of metabolism and establishing normal cortisol functioning, and sleep cycles, in infants.

It has also been shown that early initiation of breastfeeding – that is, within an hour of birth – can have significant long-term effects, and work is ongoing to understand how breastfeed can modulate the infant's genes.

Finally, and most speculatively, ultrasound studies in Australia have shown that infant saliva can be sucked back into the nipple through the vacuum effect created by the mouth. Although only a hypothesis at present, babies may just be sending information into the breast about any infections to which they have been exposed. They may even be ordering what they need in their next meal through microRNAs, tiny genetic messages in their saliva.

Breast milk contains hundreds of bioactive components, including one of the most complex microbiomes in the human body. The normal physiology of how each individual component functions, let alone the complexity of the interactions within human milk and between the mother and child, leaves a broadly under-researched field open for investigation.

With the advent of novel funders internationally, independent of food industry involvement, there is hope that the seeds of a new field of biology – human lactology – are being planted. Our own work at the Hearts Milk Bank, to establish a large bioresource of breast milk samples, will facilitate a wide range of studies into infant and maternal health, a small part of a huge body of work that lies ahead.
This rich fluid may hold many clues about human health during childhood and how illnesses that start in adulthood may be patterned in our earliest days.

Natalie Shenker MRSB is an Oxford-trained doctor with a PhD in breast cancer epigenetic risk markers from Imperial College. She is the co-founder of the Hearts Milk Bank, which aims to remove the NHS postcode lottery for screened donor milk.