The Big Biology Breakthroughs of 2017

With the help of the RSB membership, The Biologist has compiled a list of the most important advances in bioscience this year

Earlier this year, we asked Fellows of the RSB to suggest their ideas for the biggest biology stories and most important research of 2017. We had responses from across all areas of the biosciences – from embryology to forestry – but it was clear that gene editing with tools such as CRISPR remains the hottest topic in the biosciences right now.

As expected, our list contains several remarkable innovations with the power to transform human health and society, as well as research that deepens our understanding of life on Earth. Yet, sadly, our list also contains two landmark studies that have helped definitively quantify the disastrous effect humans are having on the environment and ecosystems that support us.

This summer, an international team of scientists, led by Shoukhrat Mitalipov, announced they had used CRISPR gene-editing technology to correct a pathogenic mutation in human embryos[1]. The researchers used the tool to 'repair' a mutation in a gene called MYBPC3 associated with thickening of the heart muscle and sudden death in young athletes.

Until this study, there had only been two published reports on gene editing in human embryos, and both reported that the number of embryos that were successfully modified was low.

The greatest obstacles to gene editing human embryos safely is the potential for unwanted genetic mutations (so-called off-target effects) and mosaic embryos, where some cells of the embryo have the edited gene and others don't. In their study, the team reported that they found no evidence of off-target genetic changes and generated only one mosaic in an experiment involving 58 embryos.
Currently, gene editing in human embryos destined for gestation is not permitted, and embryo screening is an effective way of detecting genetic abnormalities. Yet RSB Fellows felt that this first proof that disease-causing genes can be accurately edited from embryos before birth was of profound significance.

This year, an influential report by the US National Academies of Science, Engineering, and Medicine advised that if the technique is proved safe, gene-edited embryos could be taken through to gestation if the purpose was to prevent devastating disease.

Shaun Pattinson FRSB, professor of medical law and ethics at Durham University, wrote: "These developments again bring what were once the hypothetical questions of armchair ethicists into the laboratory and, ultimately, the clinic."
Felix Beck FRSB, emeritus professor of biochemistry at the University of Leicester, added: "The potential medical and biological importance of these advances is enormous ... Over 10,000 mutations have now been identified as the result of single-gene mutations – ranging from two forms of muscular dystrophy, through cystic fibrosis and sickle cell disease down to simple colour blindness. If safe and reliable techniques of gene editing at the one-cell stage of human development can be developed, the utility is self-evident. Notwithstanding this, ethical implications concerning the extent of application of such methodology still requires debate and a degree of consensus."

In June, the prevailing theory that modern humans evolved in East Africa 200,000 years ago was blown apart by two papers in Nature describing an extraordinary discovery in Morocco.

The first paper[2] announced that the ancient remains of a skull, jawbone, teeth and limb bones, found in a former mine at Jebel Irhoud, West Morocco, were from modern humans (Homo sapiens). In a separate paper[3], researchers revealed that the fossils and items found with them appear to be more than 300,000 years old.

The excavation and analysis of the bones and other items at Jebel Irhoud took almost a decade. Lead author Jean-Jacques Hublin, a professor at the Max Planck Institute for Evolutionary Anthropology in Leipzig, Germany, told Nature the remains were from a "primitive version of our species" and that although the skull is slightly different to that of modern humans, "it's a face you could cross in the street today". 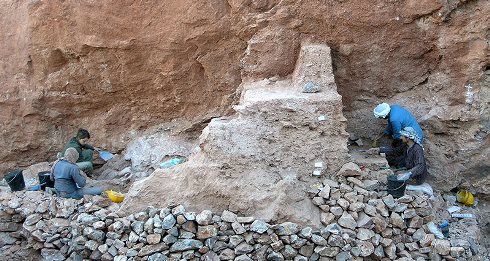 A team led by Daniel Richter and Shannon McPherron, also from the Institute, calculated the date of the finds to be 315,000 years old based on data from several techniques, including electron spin resonance dating, thermoluminescence dating, and micro- and macrofauna analysis.

If accurate, the findings suggest modern humans evolved all across the continent, rather than in Eastern sub-Saharan Africa, and that our ancestors may have coexisted with many other species of early hominid for hundreds of thousands of years.

Presenter and author Alice Roberts FRSB said: "The revelation from Jebel Irhoud pushes back the appearance of recognisably modern humans by more than a hundred thousand years earlier than the previously oldest known example, from Omo Kibish in Ethiopia. It also draws us away from such an exclusive focus on east and south Africa for the origin of our species. It seems more likely now that Homo sapiens came from a more extensive, pan-African homeland.                               "Jebel Irhoud also shows how the anatomical features that 'make' a modern human arrived bit by bit, in a piecemeal fashion. It's another important part of the puzzle, telling us more about who we are and where we came from."

A report in The Lancet[4], released in October, revealed that pollution is the largest environmental cause of disease and death in the world today, responsible for an estimated 9 million premature deaths and up to a quarter of all deaths in heavily polluted countries such as India.

The landmark study was described as the "most comprehensive global analysis to date" of the effects of toxic air, water, soils and workplaces.

The Lancet's Commission on Pollution and Health concluded that pollution is "one of the great existential challenges of the Anthropocene era" and "threatens the continuing survival of human societies". 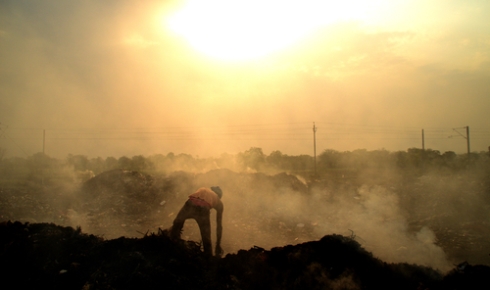 In September, the Food and Drug Administration (FDA) approved the world's first CAR T-cell-based cancer therapy, opening the way for a new generation of therapies that modify individuals' own immune cells to fight disease.

The so-called 'living therapy', marketed as Kymriah, works against acute lymphoblastic leukaemia. T-cells from a patient's blood are extracted and genetically engineered to produce receptors on their surface called chimeric antigen receptors, or CARs. These receptors allow the T-cells to recognise and target the specific antigens found on a patient's tumour cells. 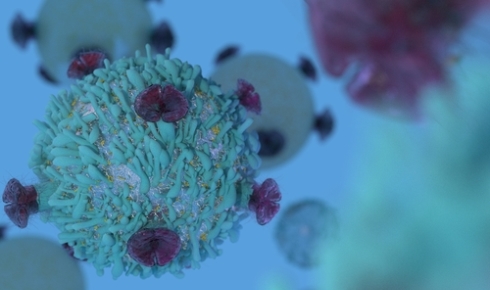 The treatment is one of several in development that genetically alter immune cells to recognise and attack cancer cells. In October, the FDA approved a second CAR T-cell-based therapy.

The energy required to fix nitrogen for crop fertilisers accounts for roughly 1.5% of global fossil fuel use per year, and nitrous oxide, a greenhouse gas 300 times more powerful than CO2, is released as a waste product during fertiliser use. Developing crop plants that can self-fertilise by fixing atmospheric nitrogen, as legumes do, has been a pressing biotechnological aim for nearly 40 years.

If crop species can be developed that self-fertilise, it has the potential to drastically increase the productivity of crops worldwide and reduce the use of energy-intensive, ammonia-based fertilisers.

Significant steps were taken this year towards developing nitrogen fixation in key crop plants, most noticeably the expression of nitrogenase in planta using plant organelles as a host. Two publications[5–6] this year showed proof of principle that nitrogenase and its associated catalytic proteins could be express in a eukaryotic organelle (tobacco and yeast respectively), while a third[7] demonstrated that plant organelles would be capable of providing the reducing power required for the nitrogen fixation process. 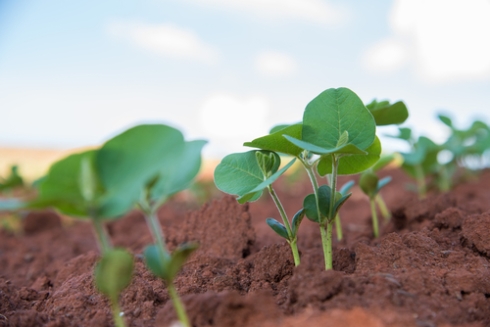 Legumes like soy, shown here, have evolved symbiotic relationships with bacteria which allow them to fix atmospheric nitrogen.

Other methods that involve engineering symbioses between plant and microbe are being heavily funded by giants such as Bayer and the Bill and Melinda Gates Foundation. Proof of concept has now been established in a diverse range of crops, including grass, maize, wheat, rice, oil-seed rape, potato and tomato using a range of different techniques[8].

Oxford plant scientist Jack Parsons MRSB wrote: "2017 has seen significant progress towards nitrogen-fixing crops, with key publications furthering the goal of expressing nitrogenase in planta and high-value industry investment in a synthetic symbiosis approach. While it remains unclear whether nitrogenase-expressing plants or synthetic symbioses will offer the best solutions to the agricultural nitrogen crisis, 2017 will be remembered as a pivotal year for both."

Entomologists have been warning for many years about the 'windscreen phenomenon': the little-noticed fact that cars are no longer coated in tiny bugs after a long drive.

A report[9] this year finally bought the astonishing scale of the collapse of insect populations over the past few decades to the world's attention.

The 27-year study of 63 nature protection areas in Germany found that flying insect biomass had declined by three quarters over that period. Mid-summer levels were even more greatly affected, suffering an 82% reduction in overall biomass over the 27-year period. The report's authors showed that the decline is apparent "regardless of habitat type, while changes in weather, land use and habitat characteristics cannot explain this overall decline".

The report prompted widespread warnings of 'ecological Armageddon', and urgent calls for further exploration of the use of pesticides and other human activities that may affect ecosystems.

Microfossils and other traces of life estimated to be up to 4.2bn years old

This year, two studies suggested there were life forms on Earth far earlier than previously thought – in fact, not all that long after the planet was formed.

Researchers in Japan wrote in Nature that they had found evidence of "biogenic" graphite particles in rocks from the northeast of Canada that could be up to 3.95 billion years old[10] while another paper[11] from researchers at UCL described "putative fossilised microorganisms" found in hydrothermal vents that they say are "at least 3,770 million and possibly 4,280 million years old".

The studies add weight to research from 2016 describing structures thought to be produced by ancient cells 3.7 billion years ago, which pushed the history of life on Earth back by 200 million years.

The Earth is approximately 4.5 billion years old, and was still being bombarded by asteroids and other debris left over from the formation of the solar system until around 3.8 billion years ago.

The increasing evidence that life began when Earth was still an incredibly hostile place helps support the idea that life has formed or could form on other planets.