Hobbyists have been experimenting with DNA and synthetic biology outside conventional lab environments for almost a decade. But with reports of groups experimenting on themselves with unproven gene therapies, is 'DIY biology' heading into dangerous territory?

Pic, above: The BioHack Academy at the Waag Society, Amsterdam, on Flickr

Biohacking is a loose term to describe unconventional experimental biotechnology, often conducted outside traditional research environments and sometimes using everyday items or recycled equipment. It is also known as DIY or garage biology.

The movement has been gaining momentum for more than a decade. Around the world, collectives of scientists, ex-scientists and non-scientists have formed community labs or 'hackspaces' in which to share ideas, knowledge and equipment. Projects are often educational and at the intersection of bioscience, engineering and art.

However, the need to understand the aims and capabilities of biohackers has been given a new urgency by recent reports of people experimenting on themselves with gene-editing tools such as CRISPR[1].

In October last year, software engineer Tristan Roberts injected himself with an unproven gene therapy for HIV, live-streaming the procedure on social media from his apartment. Shortly after, former NASA biochemist Josiah Zayner injected the gene-editing tool CRISPR-Cas9 into his arm while giving a talk to students about genetic engineering. He had modified the gene-editing tool to initiate a genetic change associated with dramatic muscle growth.

It is unclear whether either procedure had any effect, but it certainly gave a glimpse of what the leading figures in the brave new world of DIY bioscience are capable of.

The philosophy of biohacking

'Hacker culture', more broadly, is based around finding innovative and creative home-made workarounds to the limitations of existing technology, for pleasure, often assisted by knowledge sharing and open-source technology. The idea of 'hacking' living systems, in bedroom labs, emerged in the mid-2000s as biomolecular techniques such as sequencing became much cheaper and more widely available. 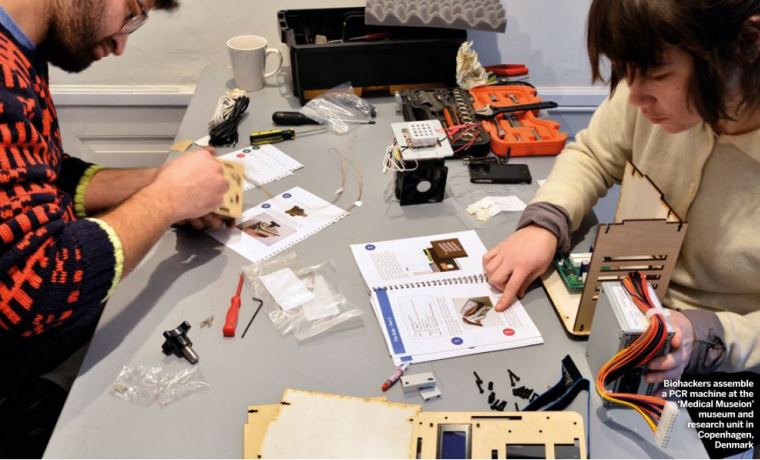 Many scientists engage with biohacking as part of projects that aim to help people learn about biotechnology, democratise scientific knowledge and accelerate innovation.

According to the massive biohacking forum DIYbio.org: "Central to our mission is the belief that biotechnology and greater public understanding about it has the potential to benefit everyone."

More recently, high-profile biohackers have advocated individuals' right to modify their own genes, arguing that it could accelerate access to life-saving gene therapies[3].

Not all biohackers are publicity-seeking mavericks. Some conventionally-sponsored research can be described as biohacking, such as Andrew Pelling's 'Augmented Biology' lab at the University of Ottawa[4], which encourages unconventional methods to innovate in regenerative medicine. Many of the students at iGEM, one of the biggest science competitions and synthetic biology meetings in the world, would also describe their approach as biohacking.

Biohackers can also be individuals or groups not obviously associated with any research institution or company - often engineers, designers, artists, scientists or ex-scientists, playing with biomolecular tools out of curiosity or for art.

The DIY approach also seems to have been adopted by a range of entrepreneurs and start-ups, such as BioViva, a 'longevity science' company whose CEO tested an unproven therapy on herself (see 'Biohacking in the news', below), and Ascendance Biomedical, the start-up behind the DIY HIV therapy mentioned above. 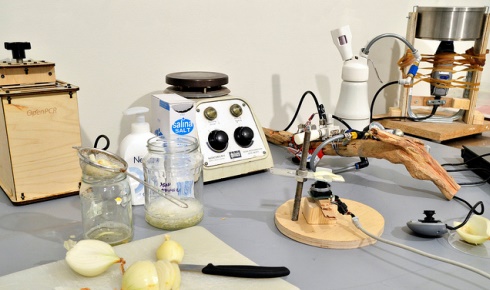 Donated and homemade bioscience equipment, via Medical Museion on Flickr

Regulation and the law

In 2009, amid concerns that biohackers could create dangerous pathogens, the FBI began sending agents to biohacking conferences and even sponsoring workshops in an attempt to better understand the burgeoning amateur movement. Cooperation with law-enforcement agencies was welcomed by many biohackers, and it was generally concluded that the development of material that could be used in bioterrorism was extremely unlikely[5].

In the UK, the Nuffield Council on Bioethics investigated biohacking as part of its wider report on the implications of advances in gene editing in 2016. It found that European DIY biology is "considered to be better or more consistently regulated than its US counterpart", but concluded that new gene-editing techniques could be "game-changing" in the way they enable "non-institutional actors" to participate in cutting edge bioscience[6].

Following the recent news that biohackers were self-experimenting with CRISPR and other gene therapies, the FDA issued a warning[7] that such procedures require prior approval and licensing, and that any gene-editing products intended for self-administration are illegal. However, biohackers say the biomolecular components of DIY gene therapy, such as CRISPR plasmids and guide RNAs, are not inherently dangerous by themselves and can be acquired perfectly legally.

It remains to be seen what else regulators and law-enforcement agencies will do to try to curb the ambitions of DIY biologists operating outside conventional scientific environments, especially those who stray into procedures that could affect the environment or are used as medical treatments.

For now, the only real thing stopping determined people from modifying organisms, including themselves, is the fiendish complexity of the process.

Biohacking in the news
2010
Genspace becomes the first facility not associated with academia or industry to be categorised as a 'Biosafety Level One' biotech laboratory. The lab, run by former cancer researcher Ellen Jorgensen, hosts regular workshops, catering for a mix of locals.
2013
A crowdfunded attempt to genetically engineer glow-in-the-dark Arabidopsis thaliana plants, and ship the resulting seeds to financial backers, raises over half a million dollars. After critics say the release of transgenic organisms is reckless, the project collapses and crowdfunding platform Kickstarter bans any similar projects.
2015
American entrepreneur Liz Parrish injects herself with an unproven anti-ageing gene therapy, having flown to Colombia to avoid US regulations. Parrish claims the unauthorised and untrialled treatment is a success, although she is CEO of the biotechnology company developing the treatment.
2016
A 'DIY bacterial genetic engineering kit' goes on sale in the US for $159.00. The kit allows amateurs to create and cultivate E. coli that can survive on media which would normally prevent its growth.
2017
Two American biohackers experiment with gene therapy on themselves in the space of a few months. The first is an untrialled gene therapy for HIV, the second aims to knock out the myostatin gene using CRISPR, a genetic change associated with increased muscle mass. Both men livestream the procedures on the internet.

Know the lingo
Biohacking is also known as amateur biology, DIY biology, and garage biology. But the term 'biohacking' is also increasingly used to describe individuals taking a scientific approach to improving their health or productivity, such as Silicon Valley execs experimenting with dietary regimes and psychedelic drugs. Transhumanism is a related but distinct field (sometimes known as the 'grinder' movement), which involves attempts to augment the human form by implanting technology such as magnets, sensors or lights into the body.