Inside the killing jar

Why do entomologists kill so many insects? Professor Adam Hart discusses the ethics of entomology collections

The Biologist 65(2) p26-29. Photos via NHM's Coleoptera Collection on Flickr.

Standing in a back room of the Natural History Museum (NHM) in London, away from the hustle of the public galleries, the museum's senior curator of Coleoptera, Maxwell Barclay, passes me a shallow wooden case with a glass lid. It's identical to the many other cases I can see around me and, like them, it contains more than a hundred dead beetles on pins.

In fact, Barclay estimates that there are more than 10 million beetles in the NHM's collection. From tiny insects scarcely bigger than a full stop to animals I can barely fit in my hand, and from nondescript browns to stunning metallic blues and greens – the sheer exuberance of this most famously diverse group is clear to see. And every single one of them is dead.

Entomology, the study of insects, is virtually synonymous with the capture and death of insects. A quick look at any entomological supplier's website quickly reveals the tools of the trade: nets, suction tubes and pitfall traps to catch, killing jars and special fluids to kill and, of course, pins and cases to 'splay and display'.

Why then, in a world increasingly concerned about the threats to insects, do those who study them continue to collect and kill them?

This is a particularly pertinent question for me because I have come under fire for killing insects. Last summer, Dr Seirian Sumner (University College London) and I started the citizen science project The Big Wasp Survey[1]. There are a handful of social wasp species in the UK, those yellow and black insects so familiar at summer BBQs and picnics. However, as Sumner points out, "scientists know relatively little about the distribution and abundance of social wasps, especially compared with what we know about bees – and yet wasps are so important ecologically". So we took the decision to ask members of the public to help us to find out more.

An effective way to sample wasps is to use a funnel inverted in a bottle part-filled with a fluid that attracts and then kills any wasps flying nearby. Beer works remarkably well. This sort of beer trap is easy to make, can be standardised and enables us to get captured (and dead) wasps under a microscope to identify the species that are present. Identification to species level can be very difficult to do from photographs and would require people to handle living wasps, which is not a good idea. After lengthy and careful consideration, we decided to ask a limited number of people to put out a standardised beer trap for a specific time period at the start of September. At this time, the traps would capture mostly non-reproductive workers at the end of their lives and avoid trapping too many of the queens that will start next year's nests.

Asking people to take part in a project that kills wasps attracted considerable criticism in the national press[2,3], with our study labelled a "bizarre conservation project" that had been "condemned by wildlife experts". Little wonder really – after all, there we were asking people to kill the very insects that we profess to love and respect. The public, though, seemed less concerned – we filled all the limited sample slots very quickly.

The controversy led to an August bank holiday 'most read' article on the BBC news website, a piece in The Conversation and a feature in the i newspaper, all of which highlighted the biological wonder and ecological importance of wasps. As with many citizen science projects, including several I have been involved with in partnership with the RSB, increasing public knowledge of the species being considered is an important by-product of the research.

With the trap contents in and the analysis beginning, as we predicted we have killed far fewer than two nests' worth of non-reproductive worker wasps – and with no queens at all being trapped, our work will have no effect whatsoever on next year's population. Our bycatch (insects other than wasps) was, as we thought it would be, generally very low and all of the non-wasps trapped are heading to the NHM for use in their studies.

It is interesting that while The Big Wasp Survey came under fire for killing a few thousand insects, the most lauded insect research of last year[4] killed millions. A quarter of a century of insect sampling in Germany, involving 50kg worth of dead insects, revealed that flying insects have suffered a drastic decline of up to 75% over that period. A wake-up call for many, this story was widely publicised and discussed, but I imagine that few of the people reading about it appreciated the lethal sampling that underpinned it. Likewise, much of our knowledge about declining pollinators comes from pan traps (shallow trays of water) that catch, and kill, bees.

The problem we face as entomologists is that to sample many insects we have to use techniques that kill what they trap. Non-lethal techniques, such as hand sampling, aren't effective for a lot of insects and are massively labour intensive. To identify many species requires us to examine tiny details and sometimes even internal structures. Sadly, this generally cannot be done with a living specimen or a photograph. Ultimately, if we need to, we can even head to a collection and compare our specimen with the pinned and labelled 'type specimen' – the actual insect specimen that defines that species.

Technologies such as 3D scanning and DNA analysis may one day provide us with an alternative to killing and preserving specimens, but at the moment the study of the most diverse and arguably important groups of animals on Earth still requires us to kill some of them. I have yet to meet an entomologist who wouldn't happily change this situation if possible.

The value of an insect in a collection is so much more than simply cataloguing the natural world. Insect collections are an archive that, like a library, can be visited and revisited, loaned and borrowed, studied and reinterpreted through time as new techniques are developed. Each insect on a pin is a rich data point and the specimens live on as part of our scientific heritage. With the information recorded about the location and date of collection, all pinned on tiny cards beneath the insect, we have valuable data on distributions and time of occurrence in the past and present. Multiple specimens of males and females allow us to study natural variation within and between sites. 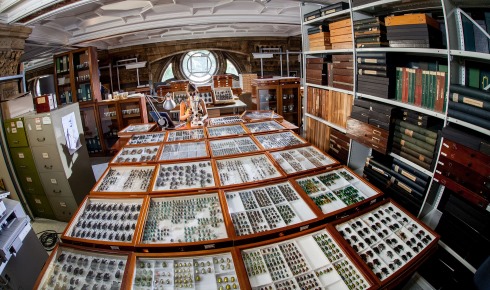 We are also becoming adept at extracting and studying DNA from old and recent specimens to examine population genetics and adaptation. We can, and do, use all of this information to compare with the insects of today, giving an insight into the pace, direction and magnitude of changes caused by shifts and disturbances to the environment, from urbanisation and agriculture to climate change. Entomologists do not kill insects lightly, but you can be assured that they do extract every last ounce of value from the lives they take.

Insects are the most diverse and one of the most ecologically pervasive groups of animals on the planet. They are critical to the functioning of ecosystems and vital to our own survival. Scientists across the globe are in a race against time to describe and understand what is out there before it's gone. Talking to many entomologists, despite a reputation for killing insects, their overwhelming attitude towards their subjects is one of very deep respect. If everyone else had the same attitude, then we might just have some hope.

Adam Hart FRSB is professor of science communication at the University of Gloucestershire, an author and broadcaster. He has co-presented three BBC TV documentaries on social insects and explored the issues of killing insects for science in the Radio 4 documentary 'Inside the Killing Jar'.