In woodland in Staffordshire, six towering metal structures bathe the area in the CO₂ concentrations expected on Earth in 2050. The experiment aims to find out how forest ecosystems will cope with our planet’s changing atmosphere, writes Anna Gardner

Covering more than 30% of the terrestrial biosphere, forests are essential for a plethora of ecosystem services. One of these is the carbon sequestration of up to 20–30% of all anthropogenic CO₂. Since the 1750s, atmospheric CO₂ has almost doubled due to a combination of burning fossil fuels (causing around 90% of the rise) and deforestation (responsible for around 10% of the rise).

Currently, the CO₂ concentration in our atmosphere is around 407ppm, but climate models predict CO₂ will continue to rise and far exceed this figure in the near future[1]. Understanding how the terrestrial environment will respond to rapidly rising CO₂ levels is therefore vital in order to plan how society can adapt to climate change.

No single laboratory experiment – or even an infinite series of such experiments – can test the response of a complex ecosystem such as a forest to changes in atmospheric composition. Whole ecosystem tests are required to study system-level responses. This is where the high-tech ‘sci-fi forest’ at the Birmingham Institute of Forest Research (BIFoR) comes in. BIFoR’s free-air carbon enrichment (FACE) facility, which is part of the University of Birmingham, is undertaking a unique outdoor experiment to expose whole, intact patches of temperate deciduous forest to the CO₂ concentrations that will pervade the planet by about 2050.

Matched by only one other forest-scale facility in the world (Western Sydney University’s EucFACE in Australia[2]) and stepping forward from previous FACE facilities – built on agricultural fields and into which juvenile trees were planted – BIFoR FACE has been built into existing ‘old growth’ forest. In this way, an existing plant and soil community in its own hydrological and climate setting is the experimental subject.

From the roadside, the facility looks like typical British woodland, but once you’re through the gates you can see this is no ordinary woodland walk. The FACE facility has been ‘smuggled’ into mature oak-and-hazel woodland in the heart of Staffordshire, taking particular care not to disturb the existing woodland canopy and the delicate soil structure.

FACE experiments allow for large areas of ecosystems to be exposed to enriched levels of carbon dioxide while maintaining other biotic and abiotic processes. It is essentially a laboratory experiment that has been taken outside and applied not to a leaf, or even a tree, but to half-a-dozen large trees, a dozen smaller trees, hundreds of ground plants, tens of thousands of invertebrates, and many billions of microbes in the soil. From above, these striking 25m-tall steel structures, arranged in circles, look like something from a sci-fi movie. 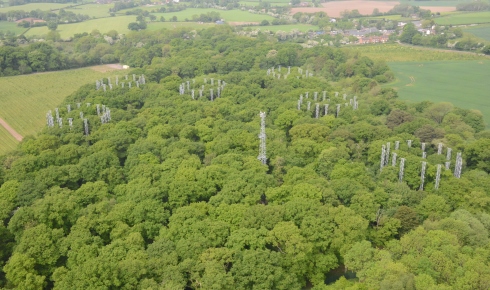 The BIFoR FACE facility seen from above, showing the 25m-high steel towers which pump 'enriched air' onto 30m-wide plots of forest. Image courtesy of Norbury Estate

At BIFoR FACE, we are exposing areas of woodland to CO₂ concentrations of roughly 550ppm, which is 150ppm above ambient levels. This is the CO₂ concentration expected by the middle of the century, so we are effectively simulating the future atmosphere around these trees to study how they may respond.

To do this, CO₂ gas is delivered through pipes into the forest, run through mixing fans to combine the CO₂ with regular air and pumped out through vertical cylindrical pipes as ‘enriched air’.

The BIFoR FACE experiment will run for a minimum of 10 years, which is essential for the study of long-lived species such as oak trees. This facility will enable the much-needed real-world experiments to improve our climate projections and evaluate risks to forest ecosystems and the services they provide.

This year marked the second year of experimental research at FACE, with multidisciplinary work occurring in each layer of the forest ecosystem. There are currently more than 20 research projects running simultaneously, from investigations of underground root systems and soil microbiology to understanding canopy leaf physiology – but much more remains to be studied.

FACE experiments require bespoke engineering to ensure a stable supply of elevated CO₂ to the treatment plots throughout the UK’s highly changeable weather conditions. To do this, process-control software determines the amount and direction of CO₂ release, responding rapidly to changes in wind speed and direction, so that CO₂ is always introduced into the ring on the upwind side and in just sufficient quantity to maintain the target concentration.

The woodland itself has been fully instrumented with a range of scientific equipment and automatic sensors installed to monitor ecosystem form and function. Unusually for a forest research area, mains power and data lines are available throughout the site. This allows for a good deal of automation in the measurements, which, in many cases, can be accessed remotely. In addition to the fieldwork research at the FACE facility, laboratory-based research on collected samples is conducted at the University of Birmingham. 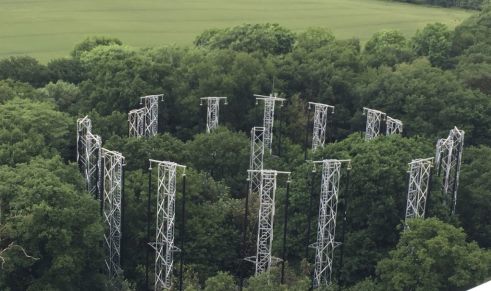 A closer view of one of the six FACE arrays. Image courtesy of BIFoR

A head for heights

With a forest’s enormous structures and overhanging canopies, it is easy to feel dwarfed by and even apprehensive of its apparent stillness. However, you soon realise how busy and alive forest ecosystems are and how much there is still left to discover about them.

My PhD project involves studying the physiology of 150-year-old oaks, specifically their carbon uptake under elevated CO₂, so my research focuses on photosynthesis and transpiration. I will be observing how carbon uptake may change daily and seasonally, but also how different environmental factors such as temperature and rainfall may affect these processes.

This, excitingly, requires me to have my head in the clouds and feet off the ground as often as possible. I use a special canopy rope-access system that enables me to spend most of my days during the growing season 25m high at the top of the oak tree canopy.

From my perch, I particularly enjoy spring mornings when the nuthatches are hopping up and down the trunks and the woodpeckers are busy hammering away on a neighbouring tree. Yet at this height in the canopy, you see so much more than just trees and birds; you see all the layers of the ecosystem working together as one.

My fieldwork involves taking sunrise-to-sunset measurements, known as diurnal sampling, from spring to autumn. The measurements I take are non-destructive and instantaneous, largely based on one piece of equipment strapped to me as I am hauled up into the canopy. I use a portable photosynthesis machine with a gas-exchange analyser unit and a head attachment that carefully attaches on to a leaf to make the measurements.

This cutting-edge technology calculates a wide variety of parameters based on the movement of carbon dioxide and water into and out of the leaf. These include rates of photosynthesis and transpiration, and stomatal conductance. The instrument also monitors environmental variables such as temperature, humidity and sunlight in order to interpret the photosynthetic parameters. I can track changes in the leaves’ physiology throughout the day.

BIFoR’s meteorological station monitors and records weather data. Combined with my measurements, this will enable me to observe the interactions between CO₂ enrichment and climatic data such as temperature and weather events.

I have completed my first season’s data collection, so I will be spending the ‘leaf-off’ period interpreting and analysing this dataset. (The great thing about studying deciduous trees is that they let you have a fieldwork rest period.) I will need at least another year’s dataset before I can start seeing robust patterns in the results.

After many CO₂ enrichment experiments in laboratories and at other FACE facilities, our knowledge base has been built on how crop plants and young tree plantations may be affected by increasing atmospheric CO₂. However, the response in mature, complex forest ecosystems may be different, and BIFoR FACE is the only facility in the northern hemisphere to address the impact of climate and environmental change on mature woodlands.

Regarding my research into leaf physiology, I expect that the photosynthesis process will be altered under elevated CO₂, but that the response will vary across the timeline of the longer-term project. There are many other projects at BIFoR FACE, including the study of insect physiology, fungal microbiology and root development, all of which will produce data essential to understanding the functioning of our future mature woodlands.

Studying long-lived species such as oak trees requires time, so the research at BIFoR FACE has only just begun. Over the next few years, the facility will generate large quantities of data from experiments inside the woodland, and in the laboratories, to help answer questions related to the uncertainty of our future ecosystems both in the UK and globally.

You can follow the research developing at BIFoR at www.birmingham.ac.uk/bifor