A sense of place

How do we remember events from the past? The question has puzzled researchers for centuries. In the 1970s, psychologist and neuroscientist Endel Tulving suggested that memories of earlier episodes have three major components: ‘where’, ‘when’ and ‘what’[1].

Since then, there has been a giant leap in describing the brain network that supports memory formation, with special insights into the ‘where’ component. Accordingly, we now realise that much like the global positioning system that we so often rely on when driving our car, the part of our brain that is responsible for coding memories has a complex and specialised system of cells that continuously updates position and direction, generating cognitive maps of our surroundings as we navigate the world.

The internal system of cells that both supports memories and provides navigational information is located in the brain’s temporal lobes in areas called the hippocampus and the entorhinal cortex (see fig.1). Changes in these brain areas have been seen when people are in need of exceptional memory skills. Hence, studies have shown that London taxi drivers who learn the name and position of thousands of streets in the city for their exams have significantly increased volume in these parts of the hippocampus after completing their training [2]. 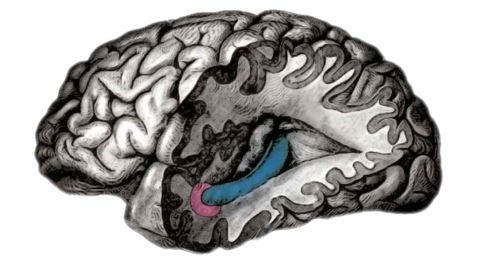 Fig. 1: In 2005 distinct firing patterns, associated with location and navigation, were traced to the entorhinal cortex (shown here in pink), a lobe which inputs into the hippocampus (blue)

Extensive studies, mostly in rodents, have shown that the brain cells in the hippocampus have surprisingly simple firing characteristics that enable researchers to read out their signals by using microelectrodes positioned close to the cell bodies.

In 1971 it was discovered that certain hippocampal cells fire only when an animal is in a specific location in the local environment, but never elsewhere. As a result, these were aptly called ‘place cells’, and the geographical location at which these single cells fire is referred to as the cell’s ‘place field’. By recording the firing patterns of multiple place cells – for example, as recorded in experiments with a rat moving freely in a box – researchers can predict the exact location of the animal at all times.

The origin of the ‘place’ signal in the hippocampus remained an enigma for decades, but in 2005 cells with an even more striking firing pattern were discovered in the hippocampus’ major input region, the entorhinal cortex. Whereas single place cells fire in only one location in an environment, these other cells fire in multiple positions, creating a hexagonal firing pattern tessellating the area explored by the animal. Because of the regularity of the firing pattern, the cells were called ‘grid cells’.

Every grid cell creates a signal reminiscent of an internal metric system, much like the latitude and longitude of a map. In the mammalian brain, however, the basic unit of this system seems not to be squares, but equilateral triangles in a hexagon. The absolute firing locations vary between cells, so that all places in a room can be represented using only a handful of grid cells. The size and spacing of the firing nodes also differ for cells along the length of the entorhinal cortex, and cells at the top of the structure have higher resolution than those further down[3].

Fig. 2: Diagram showing the distinct firing pattern of place cell and grid cells relevant to an animal's location. Click to enlarge.
Grid cells also intermingle with cells that code for local borders, cells that keep track of the speed at which the animal is travelling and cells that register the direction of the head in the horizontal plane.

Integration of direction and running speed are crucial for precise positioning of grid fields, and information about local borders and other landmarks may anchor the grid map to the local environment. As a result, grid maps can remain stable in a familiar environment over several weeks. This also means that the downstream hippocampus receives additional information about the animal’s heading distance, direction and the position of stationary borders.

The dorsal part of the medial entorhinal cortex contains the smallest grid cells, and the biggest are found at the most ventral positions. In between, grid modules of different sizes are intermingled and cannot be detected with anatomical methods only[3]. Moreover, grid cell function is not tied to one specific type of neuron, as both classes of excitatory principal neurons in the entorhinal cortex, the so-called stellate and pyramidal cells, can serve as grid cells[3]. Thus, there are still uncertainties regarding what defines grid cells on a cellular and macroscopic level.

Studies of grid cells have mostly been performed in artificial environments where rats or mice walk randomly – chasing chocolate in empty boxes with flat walls and a flat floor. This means that we are still not sure how the cells code natural, complex surroundings. However, when a typical recording box is divided into many smaller corridors, forcing a rat to make a hair-pin turn at the end of each alley, grid patterns are reset at the entrance of every corridor as if every alley was a new room.

On the other hand, when two familiar and nearby locations are merged by removing the wall between them, different firing patterns in the two compartments merge, resulting in an integrated hexagonal pattern covering the entire arena[4]. Thus, it seems that grid cell firing patterns become fragmented in smaller environments and that the grid map adapts to environmental changes to maintain a global representation of the surroundings.

The ‘where’ component of our memories has been used to enhance memorisation for thousands of years. One example is the ‘method of loci’, a well-known remembering strategy that can be traced back to the ancient Romans and Greeks.
It commonly involves visualising each item that is going to be remembered – for instance a word or a number – in different positions in a familiar building, a so-called ‘memory palace’. On the cellular level, different rooms in the memory palace are represented by unique ensembles of place cells. Thus, the place cells ‘carry’ the memories and keep them separated.

Grid cells are always active, creating hexagonal firing patterns in experimental environments that are large enough to contain more than two firing fields. This suggests these areas of the entorhinal cortex form a universal map of an animal’s surroundings. When an animal moves between rooms or environments, grid patterns of the different modules of cells respond by moving and rotating independently of one another, creating unique activity patterns of active cells in the downstream region – i.e. the hippocampus.

Researchers can observe how hippocampal place cells turn on/off or change their firing locations when animals move between rooms. This is termed ‘global remapping’[5]. In this manner, the hippocampal cell assemblies that are thought to carry our memories also provide different contextual maps of all environments encountered. This is how we can keep our memories separated and reduce the chances of interference between them.

When a specific memory is represented by a population of activated place cells in the hippocampus, we believe that the couplings between the active cells are strengthened by a process called ‘long-term potentiation’[6]. Importantly, when only a fragment of a memory is later recalled, leading to the activation of only some of the cells in the ensemble, this typically brings back the whole experience because the strengthened cellular connections quickly reactivate the entire cell assembly. In the ‘memory palace’, the view of the table alone may thereby activate the memory of the entire dining room.

The ‘when’ and ‘what’ components of memory are also stored in the cell ensembles of the hippocampus. Just think about all the possible trigger cues that can bring back memories of events: a date can take you back to a wedding that happened years ago and the smell of strawberries may remind you of last summer. Supporting these abilities, the cell populations in the entorhinal cortex respond both to odour associations and objects in the environment. They also keep track of subjective time as an animal explores the world[7]. As such, the entorhinal cortex provides input to the hippocampus not only about ‘where’, but also about ‘what’ and ‘when’. However, although the hippocampus is crucial for recalling events, it is not evident that entire memories are stored here. It is also possible that the hippocampal cell ensembles are ‘keys’ that unlock memories stored in other areas of the brain.

Place cells and grid cells have been found in many mammalian species and the navigational system represents an old evolutionary trait. In addition, the map seems to be functional from early in development; experimental data has shown that place cells, as well as directional cells and border cells, are present from the time rat pups start to explore the world outside their nest for the first time. The grid cells mature more gradually. The factors that set up the navigational system in the brain this early are still unknown, but a role for dedicated progenitor cells is likely.

Detailed knowledge of the brain’s memory system will hopefully provide more general insight into how other networks of brain cells code information. In Alzheimer’s, the most common neurodegenerative disease worldwide, disorder of the entorhinal cortex and the hippocampus causes severe disorientation and memory impairments, and confusion about time, leading to difficulties remembering the sequence of events. In many patients, the first clinical sign is a tendency to get lost.

Consistently, a recent study reported that genetic carriers of the risk gene apo-E4 have altered grid-like representations in the entorhinal cortex many years before potential disease onset[10]. If the coding principles of the navigational system apply to networks in other parts of the brain, improved knowledge of the pathophysiology of Alzheimer’s disease may also increase our insight into the secrets of other neurological and psychological disorders, possibly allowing for the development of early diagnosis and new therapeutic options.

Tale Bjerknes studies space, navigation and orientation in the brain at the Kavli Institute for Systems Neuroscience and Centre for Neural Computation, the Norwegian University of Science and Technology (NTNU). May-Britt Moser is founding director of the Centre for Neural Computation and co-director of the Kavli Institute for Systems Neuroscience at NTNU. She and Edvard Moser shared the 2014 Nobel Prize in Physiology or Medicine for their work on grid cells and cognitive maps.