From Addiction to Alzheimer's

Nicotine, the main active ingredient in tobacco, is now widely accepted as the key molecule responsible for the pleasurable and addictive effects of tobacco smoking. Although the desirable effects of smoking come from the pharmacological actions of nicotine, combustible tobacco contains many other chemicals. These include not just harmful substances such as nitrosamines, formaldehyde, lead, arsenic and benzene, but also chemicals that can enhance the addictive properties of nicotine[1].

Tobacco has been consumed for many centuries with little understanding of the role of nicotine and its effects on neurotransmission in the brain. However, scientists are now able to identify the pathways and receptors upon which nicotine acts to produce its diverse array of behavioural effects.

Nicotine acts on the brain’s nicotinic acetylcholine receptors – i.e. receptors that respond to the neurotransmitter acetylcholine and nicotine. Scientists have known for a long time that acetylcholine was involved in cognition, but it was not until the 1980s and 1990s that the modulatory effects of this neurotransmitter on arousal, reward, attention, learning, memory and plasticity were recognised[2]. Clinically, a landmark finding in the late 1970s demonstrated the role of cholinergic neurotransmission in dementia[3]. This work provided the foundation for the current research on cholinergic systems in memory-related impairment within a range of neuropsychiatric disorders.

Given the involvement of nicotinic acetylcholine receptors in cognitive processes, it is not surprising that these receptors have been implicated in neuropsychiatric disorders in which cognitive impairment is a prominent feature.

Alzheimer’s disease (AD) is typically associated with degeneration of cholinergic neurons in the basal forebrain that innervate the cortex, amygdala and hippocampus, which leads to significant cognitive impairments[4]. These cholinergic projections, particularly those that innervate the hippocampus and prefrontal cortex, are crucial in memory processes. The dramatic impairment in memory that is observed in AD appears to be a direct result of a decline in acetylcholine levels throughout these memory circuits[5]. 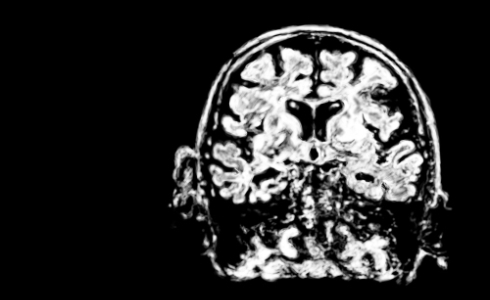 The nicotinic acetylcholine receptor has also been implicated in cognitive impairments associated with Alzheimer's disease (pictured), schizophrenia, and Parkinson's disease.

There is renewed interest by research groups and pharmaceutical companies in the potential for developing ‘cognitive enhancers’ based on these cholinergic targets. In particular, nicotinic receptors have been shown to be effective targets, with a variety of nicotinic agonists and modulators being shown to improve a wide array of cognitive metrics in laboratory animals.

For example, pre-clinical evidence suggests that acutely administered nicotine can enhance spatial learning and working memory in rodents[6,7,8]. Similar tests with nicotine have been conducted to study its effect on attention and reaction time. In rats, both acute and chronic forms of nicotine administration can improve performance in sustained attention and stimulus detection tasks[9], while nicotine administered subcutaneously or intravenously to patients with AD appears to improve sustained visual attention, reaction time and perception[10].

Research has suggested there is dysregulation of nicotinic acetylcholine receptors in patients with schizophrenia, including reduced upregulation of certain nicotinic receptors and functional polymorphisms in the promotor region of the α7 subtype (see ‘Subtypes of receptor’, below), which alters sensory physiology. Post-mortem studies have also shown reduced numbers of α7 nicotinic receptors in the hippocampus, the reticular nucleus of the thalamus and the prefrontal cortex in patients with schizophrenia[12].

The research demonstrating nicotine’s ability to improve learning, memory and attention also apply to the symptoms of schizophrenia. 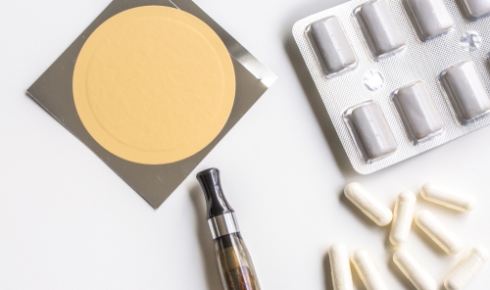 In addition, the observation that the majority (˜80%) of schizophrenic patients smoke led to the suggestion that tobacco smokers with schizophrenia may self-medicate with nicotine to ameliorate deficits in cognition, although there are other explanations for this that may be more convincing[4].

Cognitive impairment is common in neurological disorders and the link between these impairments and the cholinergic system is clear. Thus nicotinic receptors have also been implicated in Parkinson’s disease. Neuropsychiatric symptoms of this disease include disorders of cognition, mood, behaviour and thought. One study found a 70% decrease in high-affinity nicotinic acetylcholine receptor density in the substantia nigra and a 40–50% decrease of these receptors in the laterodorsal tegmental nucleus in humans with Parkinson’s disease[13].

Parkinson’s patients have also seen improvement of their symptomology with nicotine. One example found that nicotine administered as a combination of patch and gum significantly reduced rigidity, tremor, disorganised thinking and depression in non-smoking patients with Parkinson’s[14].

Furthermore, nicotine also appears to have neuroprotective effects against the development of Parkinson’s disease, with studies showing that nicotinic receptor loss following experimental damage could be prevented by long-term nicotine administration.

Receptor subtypes  There are different subtypes of nicotinic acetylcholine receptors in the brain. These are composed of combinations of α and β subunits and can be divided into two main categories based on their sensitivity to α-bungarotoxin, a neurotoxin found in snake venom.
Conventionally, the group containing α-bungarotoxin-sensitive receptors consist of α7 and α9 subunits, while the group containing α-bungarotoxin-insensitive receptors consist of different combinations of α2-α6 and β2- β4. The two most common receptor subtypes in the central nervous system are the α7 subtype and the α4β2 subtype[16].

Research examining the potential therapeutic effects of nicotine for neuropsychiatric disorders looks promising. However, potential pitfalls in translating findings from preclinical research into widespread treatment are the harmful effects of tobacco smoking and the relatively slow pharmacokinetics of other methods of consuming nicotine, such as patches and gum.

As a treatment, nicotine delivery should not be via tobacco smoking for the obvious reason that it is harmful and promotes addiction. The possibility of administering nicotine via electronic systems that would deliver the nicotine to the central nervous system more quickly and more effectively is being explored. On the other hand, administering nicotine via this route may present risks, as high levels of nicotine being delivered to the brain rapidly may induce dependence.

Future research into the electronic delivery of nicotine using e-cigarettes may look at manipulating the speed at which the nicotine enters the brain in an attempt to remediate the cognitive deficits associated with these neuropsychiatric disorders while avoiding dependence. Another way to avoid dependence may be to target specific nicotinic receptors, but avoid nicotine altogether. Recently, there has been a major effort in doing just this: much research has been focused on targeting the α7 nicotinic receptors, which have been more strongly associated with these disorders.

However, there has been a high failure rate in the translation of these compounds to human clinical trials, mostly because they have either not shown statistically significant improvements in efficacy or have produced unanticipated side effects[15].

Despite these difficulties, this research clearly provides a promising direction for the future of our effort to treat these disorders. We have seen how nicotine and other nicotinic compounds is showing great promise in treating a variety of neuropsychiatric disorders, but the journey is not yet complete. We still need more research and the development of novel compounds in this effort.

However, the future looks promising, particularly for a line of research that all started with a chemical contained within tobacco leaves.