How and why do plants sense sound and vibration? Heidi Appel and Rex Cocroft explain

Plants detect specific wavelengths of light with receptors that operate on principles similar to those in our retina. They can also distinguish a wide range of chemical compounds[1,2]. Plants are also exquisitely sensitive to touch and other mechanical disturbances, something Darwin discovered and described in his 1875 book Insectivorous Plants.

The human propensity to anthropomorphise the living world means we have a history of sometimes overestimating what plants can do. In 1973 The Secret Life of Plants by Thompkins and Bird described experiments suggesting that plants could perceive human emotions.

The book captured the public imagination in the western world at a time when eastern mysticism was being rediscovered, but the claims were not supported by subsequent experiments[3]. This unfortunate chapter set the field back decades as scientists were fearful of losing credibility in pursuing studies of plant sensing outside of the context of plant physiology and molecular biology.

The last two decades have seen a resurgence of scientific interest in how plants can detect and respond to a wide range of stimuli. Efforts to explore the role of vibrations – aka ‘sound’ – in the sensory world of plants have examined the impacts of music or single tones on seed germination, plant growth above and below ground, disease resistance, and the expression of plant genes[4,5,6,7]. In most cases, plants did respond to these vibration treatments in some way. This leads to the obvious question – why? 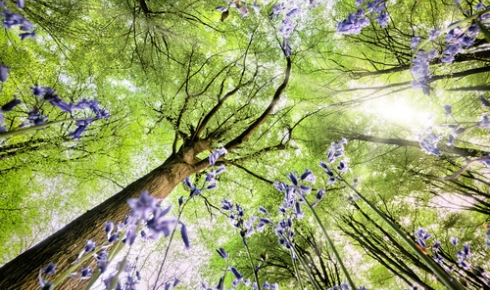 What acoustic stimuli do plants experience in nature? By ‘acoustic’, we mean any mechanical stimulus that causes vibration of plant tissues. Sources of mechanical vibration in plants fall into two broad classes: vibrations generated locally by organisms or abiotic forces that directly contact the plant, and vibrations generated at a distance, which reach the plant only after propagating through a medium such as air or soil.

A laser vibrometry recording of a cabbage butterfly caterpillar feeding on Arabidopsis thaliana. The technique allows us to hear, as airborne sound, the vibrations that travel through the plant while the caterpillar is feeding.

Plants are efficient absorbers of airborne sound (which is why they are used for noise reduction) and the vibrations of a leaf provide a filtered but otherwise faithful reproduction of the auditory landscape experienced by a nearby person. At a given moment the acoustic stimuli experienced by a plant might include low-frequency vibrations generated by wind, higher-frequency vibrations produced by a feeding grasshopper and a range of frequencies generated by airborne sounds.

One thing lacking in most studies of plant responses to acoustic stimuli is the use of a vibrational treatment known to be relevant to plants, and a measurement of a relevant plant response. Perhaps plants just react to any vibration and, if so, wouldn’t that be a useless, and even wasteful, effort?

To understand why plants have evolved the ability to detect and respond to acoustic stimuli, we need to consider not only what stimuli are important in a plant’s natural sensory environment, but also what responses would be adaptive for the plant. In an example from our own work, a caterpillar feeding on a leaf generates a burst of vibration every time it closes its mandibles, and these vibrations propagate to nearby leaves. What responses might we expect if plant tissues can perceive and react to an acoustic stimulus generated by the attack of an important natural enemy?

Because a plant typically responds to the presence of feeding caterpillars by increasing its chemical defences, we measured two classes of anti-herbivore defence: glucosinolates and phenolics. To do these experiments, we used a cold laser to measure the vibrations of a leaf caused by a caterpillar feeding and played back those vibrations to leaves in the absence of the caterpillar to separate the additional signals plants receive during herbivory – i.e. wounding and caterpillar oral secretions. (You can listen to the audio of the caterpillar mandibles in the video above). We found that both glucosinolates and anthocyanins were present at higher levels in the leaves in direct response to feeding vibrations or were primed to increase to higher levels upon subsequent attack.

During insect herbivory, a plant receives multiple sources of information, including feeding vibrations, tissue damage and the insect’s oral secretions. The resulting signals have different transmission speeds throughout the plant, with vibrations transmitted more quickly through plants than electrical and phloem-borne signals. How plants integrate these signals over short periods of time to provide rapid systemic responses to stress is unknown[8].

One would not expect plant responses to feeding vibrations to be exactly the same as to actual insect feeding. Plant responses to tissue damage from herbivory are distinct from those to mechanical wounding, in part because of the timing and extent of damage and the absence of insect oral secretions[9,10]. 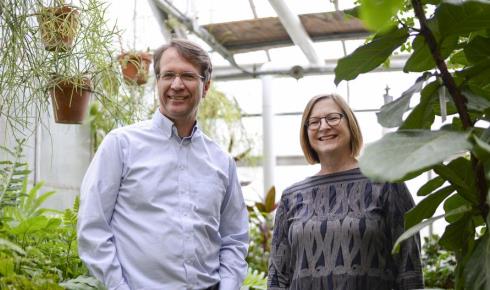 Some plant species rely on specific vibration frequencies generated by the wing muscles of their bee pollinators before pollen is released[11] – is this interaction mediated only by flower structure or is there a role for plant perception of those acoustic stimuli? Some bat-pollinated plants have evolved petal shapes that serve as acoustic reflectors to attract their pollinators – are there natural sources of airborne sound that plants have evolved not only to reflect but also to detect? Roots of some plants have also been found to grow towards sound sources in the soil. Sound-guided growth is hypothesised to be a means for plants to forage for water, but the natural acoustic ecology of roots is as yet unexplored.

There is much yet to be learned about the ways in which plants detect and integrate vibrations with other signals. We now know, however, that plants do detect vibrations of relevance to them and respond in ways that can maximise their fitness, analogous to the ways in which animals use sounds. Perhaps this is not surprising given the common eukaryotic origins of animals and plants, and the presence of cellular mechanoreceptors throughout both kingdoms.

The emerging paradigm of plants as sensory beings has even sparked new debate over levels of sentience in plants. These are interesting discussions with ramifications extending beyond plant biology into philosophy[12,13,14]. With careful experimentation using vibrations and responses relevant to plants, we hope to see this field continue to contribute strong science to inform those discussions.