Dr Kasia Makowska reveals highlights from the NC3Rs’ latest review of innovations to help replace, reduce and refine the use of animals in biomedical research

What do building artificial bones, catching ferrets’ breath and testing tuberculosis (TB) vaccines have in common? This seemingly unrelated list has one common denominator: the 3Rs.

More specifically, they are all projects funded by the NC3Rs (National Centre for the Replacement, Refinement and Reduction of Animals in Research) and highlighted in our recent research review [1].

The 3Rs are a familiar concept for many people in the scientific community. They stand for replacing the use of animals in research, reducing the numbers where the use of animals continues to be required, and refining the care of the animals to keep any pain and suffering to a minimum.

These principles have been embedded in national and international legislation and regulations as well as in the policies of organisations that fund or conduct animal research.

The NC3Rs supports new technologies and approaches that advance the 3Rs and achieve scientific benefits. Progress in science and technology that we support provides new opportunities to address important scientific questions without the use of animals. Where that’s not possible, we promote new methods to improve understanding of animal welfare and to make sure the experiments are robust and reproducible.

Through our work we have shown that the benefits of 3Rs-focused science reach beyond the 3Rs themselves. Our grant holders’ research has led to improvements to human and animal health and the environment, as well as generating commercial opportunities.

The recent research review features case studies on the work of 12 NC3Rs-funded researchers, and demonstrates the breadth of science we fund in areas as varied as parasitology and cardiotoxicity. It also includes approaches from a variety of disciplines, including mathematical modelling and advanced imaging techniques. Here are just a few examples.

Each year in the UK seasonal flu affects 10–15% of the population and is associated with 12,000 deaths.

Suprisingly, ferrets are a ‘gold standard’ for studying influenza virus infection and transmission. This is because ferrets are susceptible to infection with the human virus and show similar clinical signs – such as fever and sneezing – to those experienced by humans.

A key question scientists are studying is how the influenza virus is transmitted. Infected (donor) ferrets are housed next to uninfected (sentinel) ferrets for up to 14 days to determine how quickly the virus is transmitted from one animal to another, a set-up intended to be akin to a household environment. To determine whether transmission has taken place the sentinel ferrets undergo nasal flushes or swabs.

Depending on the particular research question, an experiment can use up to 64 sentinel animals. However, the studies do not completely recreate what happens in humans, where contact time can be much shorter and where often transmission may occur over a greater distance.

Professor Wendy Barclay from Imperial College London wanted to address this and explore ways of reducing the use of ferrets. Using NC3Rs funding, Professor Barclay and her team designed, manufactured and tested a piece of equipment called the influenza virus transmission tunnel (IVTT), which replaces the use of sentinel ferrets.

The device consists of a metre-long tube with cell-culture plates containing a cell line highly susceptible to influenza viruses positioned at different distances along the tube. Infected ferrets are placed in a chamber attached to the IVTT for a maximum of 10 minutes.

To determine the amount of infectious virus in the animal’s exhaled breath, the researchers no longer have to use sentinel ferrets – the same question can now be answered by counting the viral plaques on the cell-culture plates in the IVTT. 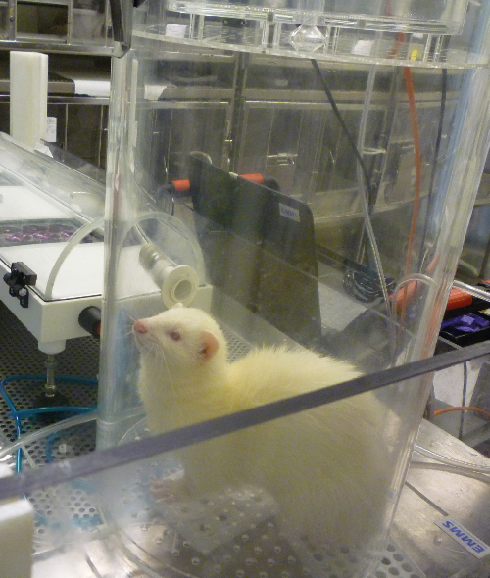 How do you encourage ferrets to breathe into the tube? Covering the input nozzle with a tasty, nutritious supplement oil does the trick.

The Barclay laboratory has shown that factors affecting virus survival in airborne droplets, such as the stability of the virus particle, can actually be examined more readily in the IVTT than in the animal-to-animal transmission studies.

Virus recovered from the cell cultures can be studied easily using molecular techniques – for example, to define the genetic factors that enhance transmission; such studies are more challenging to do in the ferret. So not only does the device help reduce the use of animals, it opens up possibilities to answer new scientific questions.

Bone, as well as forming during normal development and fracture repair, can form in extraskeletal tissues following muscle trauma, traumatic brain or spinal cord injury, or surgical procedures on the hip and knee.

A range of animal models including rodents, rabbits and larger animals such as pigs, sheep and goats are used to study bone formation. The studies often involve the use of genetically altered mice that are prone to pathological mineralisation or involve implantation of bone marrow-derived stem cells.

For trauma models it might be necessary to cause physical damage by crushing a muscle or fracturing a bone. These animal models are often associated with severe suffering and they are not always representative of pathological states. Although cell-culture models exist, they don’t always represent what happens in the human body.

The University of Birmingham’s Professor Liam Grover, along with his PhD student, Alexandra Iordachescu, have developed a compelling alternative. They have created a self-structuring in vitro model for the development of mature bone, which has already replaced animal models of early bone formation and for screening potential drugs that affect bone growth.

The model consists of a gel cast between two ceramic anchors into which rat bone progenitor cells are seeded. Iordachescu has shown that the cells deposit an ordered matrix that closely resembles mature bone in terms of its collagen/mineral ratio and cellular composition. The model remains viable in culture for more than a year, reflecting the successive phases of bone development, from initiation of formation through to the differentiation of cell types and mineralisation.

Iordachescu and Grover are working with groups at other UK universities to transfer the model into their laboratories, helping to further replace the use of animals.

Iordachescu has finished her PhD and has been awarded an NC3Rs Training Fellowship to develop the in vitro model and study the bone loss that occurs when weight bearing is reduced – for example, during ageing or immobilisation linked to injury, or in weightlessness. 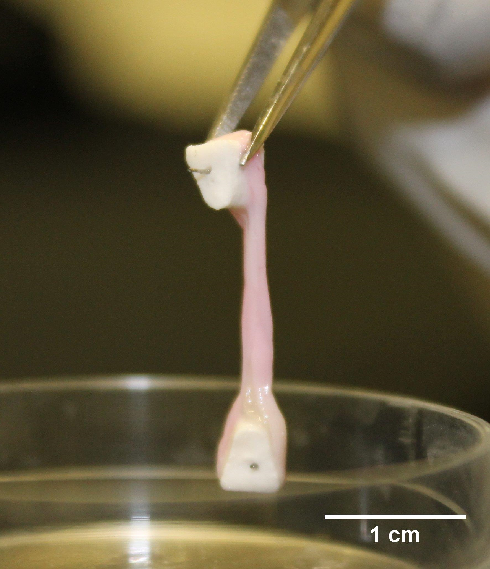 TB is an increasing global threat, with 10 million new cases and 1.6 million deaths worldwide each year. The only established vaccine is not always protective, leading to an international effort to develop new vaccines. Vaccine candidates are typically evaluated using mice, guinea pigs and non-human primates (NHPs), which are immunised with a test vaccine before being infected (‘challenged’) with Mycobacterium tuberculosis,the causative agent.

The mycobacterial growth-inhibition assay (MGIA) is an in vitro assay where instead of infecting animals with TB, blood cells are taken from unvaccinated and vaccinated animals and cultured with mycobacteria. This way, the inhibition of bacterial growth in the presence of the cells is used as a measure of protective immunity, rather than infecting animals with TB and observing whether they develop disease symptoms.

Dr Rachel Tanner from the University of Oxford has been promoting the use of this refined method. She optimised the use of MGIA in a number of species, including primates, to show correlation between in vitro and in vivo data, as well as clinical agreement based on a comparison with epidemiological data.

Despite this, the TB research community still had concerns about the reliability and reproducibility of the assay. To build confidence in the model Tanner formed collaborations with scientists at two institutes, in the UK and in the Netherlands. With NC3Rs funding they are working together to facilitate the adoption of the primate MGIA assay in their TB vaccine programmes.

The blood cells can be used to screen multiple clinical isolates and vaccine candidates, which should mean 45 fewer macaques are used at the two institutions annually. By using blood cells from previous infection-challenge studies, Tanner and her collaborators have shown that the assay is highly reproducible between tests, operators, laboratories and institutions.

The MGIA measures most aspects of the complex host immune response to Mycobacterium tuberculosis and it is easy to manipulate individual components of the assay. This means it is possible to use it in studies that are difficult and costly to do in vivo – for example, to determine the immune mechanisms controlling mycobacterial growth and identify factors that correlate with protection.

Tanner has now helped to set up the assays for various species at 13 institutions in Europe, North America and Asia, providing protocols and technical support. More broadly, the work has underpinned a general shift in the acceptance of the MGIA by the TB research community.

As projects such as these reach maturity the focus moves to dissemination. Many of our grants have developed novel methods and techniques, and it is important that they are shared across institutes and research fields.

Encouraging the uptake of 3Rs technologies and developing approaches to bridge the gap between development and adoption into routine use is therefore a key area of our work.

Our new NC3Rs Gateway, developed with the open-access publisher F1000Research, provides a platform for our grant holders to describe in detail their 3Rs research, model development and validation to allow other scientists to better use the models.

More about the 3Rs can be found in our research review, which includes examples of drug screening in a virtual heart and the use of fruit flies to study human disease. These are exciting times, as there are now realistic opportunities to put the 3Rs into practice, and many scientists are embracing this to benefit their research.