The shell of pollen grains is one of the toughest biological materials found on Earth. Grahame Mackenzie and Terry Corbitt look at its amazing properties and potential uses

When we think of shells perhaps our first thoughts are of those we see most frequently: eggshells, seashells or nutshells. These can be inorganic, such as the calcium carbonate in eggshells and seashells, or organic like the lignin in nutshells or chitin armour of crabs. On a much smaller scale, individual fungal, bacterial and plant cells have shell-like cell walls, usually made from a range of different types of polysaccharide.

The outer walls or shells of mature pollen and other plant-spore grains are made of ‘sporopollenin’, a polymer type that is unique in the living world [1]. This outer shell, called the exine, is sometimes multilayered, and traversed by nanodiameter-sized channels [2] and openings called apertures.

The uniqueness of sporopollenin as a shell fabric stems from its remarkable stability. It is constructed primarily of highly cross-linked lipid units, as opposed to more common shell polymers such as polysaccharides and proteins [3]. It was first studied in 1814 by J. J. John, who named the material ‘pollenin’. In 1829 Henri Braconnot found similar stability in materials extracted from pollen and called it ‘sporonin’.

In the 1920s Fritz Zetzsche described isolating highly resistant material from the asexual spores of club moss using a series of solvents, concentrated acid and bases. In acknowledgement of his forerunners he combined the two earlier words to form the collective name ‘sporopollenin’, based on the fact that all the materials appeared to have the same chemical character.

In that sense, sporopollenin is a chemical concept and can vary between plant species. It has been defined as the “resistant non-soluble material left after acetolysis (treating with sulfuric acid and acetic anhydride) of pollen and spores”[4]. Sporopollenin is insoluble in organic and inorganic solvents, including strong acids and strong bases but is decomposed in strong oxidising agents. Due to this unique stability, sporopollenin has been called the “diamond of the plant world”[5].

Sporopollenins have been described as “probably the most resistant organic materials of direct biological origin found in nature and in geological samples”[6]. Spore-containing plant fragments have been found in Ordovician rocks that are likely to be more than 450 million years old [7].

The sporopollenin-like polymers found in fossils are altered to some extent, but still have distinct chemical features that identify them as originating from sporopollenin. In spite of its remarkable resilience, sporopollenin can be decomposed both microbiologically and oxidatively in the environment [8]. Animals including bats, springtails, bees and moths can also digest sporopollenin [9].

The resilience of sporopollenin evolved as part of its role in protecting, transporting and delivering its payload of DNA, lipids and protein nutrients necessary for the plant’s reproduction. This function needs to work across many different types of environment and conditions depending on the pollination method (by air, insect, water).

For example, those pollens and spores exposed to strong sunlight during pollination should possess materials with effective light-shielding and antioxidant properties; in the case of wind and water transport, such materials require elasticity and mechanical resilience [1]. These evolutionary changes are essential for plant reproduction. 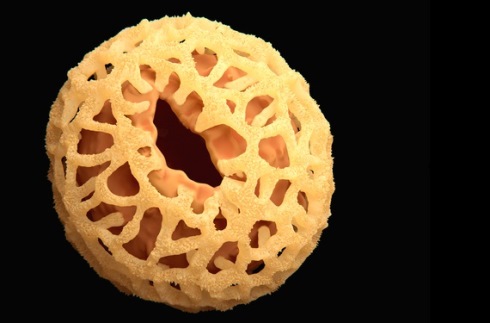 The pollen exine of Nenga, a palm found in Southeast Asia

A tough nut to crack

Efforts to interrogate all of sporopollenin’s structural features are often thwarted by this toughness. The destructive methods necessary to break up the variety of building blocks in the polymer mean it is hard to know if the resulting fragments truly represent the pieces in sporopollenin’s native form [3].

Assuming they are, there is then the jigsaw-like problem of trying to piece together these constituent parts as they would be in the native form. Such problems exist in the structural elucidation of other natural polymers, particularly lignin, which bears some similarities to sporopollenin in terms of the functional groups involved.

The chemical structure and properties of pollen and spore-grain shells are important to a plant’s reproduction, but so are the morphology and topology of such shells. The shape, size and form of the nanoscopic channels on the exines’ surface are peculiar to the plant species and function as exits for the pollen tube in germination and for the uptake of water.

Fascinatingly, every plant species produces a pollen or spore grain with its own identifying morphology and topology. The grains can vary in size from 5–100µm according to species, and there are also variations in shape, aperture arrangement and surface sculpturing, which can be smooth, rough like sandpaper, grooved, warty, mesh-like or comprising free-standing projections of varying shapes.

Such clear identifying features are of great use to archaeologists, palaeontologists and forensic scientists, who can use the features to identify the plant genus or family where other tissue has long since degraded.

These peculiarities are often a function of the environment of the plant and mode of transport required for transfer and actual pollination. For example, Ambrosia artemisiifolia (ragweed) pollen surfaces possess hooks and Helianthus annuus (sunflower) pollen grains are highly spiked to attach to insects (and subsequently a plant’s stigmatic surface). In contrast, wind-pollinated plants such as grasses produce pollen grains with a smooth surface and pine trees produce pollen grains with three chambers joined together, with two acting as wings to catch the wind.

With such a range of chemical and physical properties, exine shells have evolved into an enormous range of multifunctional microcapsules of different sizes (see fig.1, below), morphologies, topographies and chemical characteristics [4]. Many of these microcapsules have potential applications in areas other than that for which they evolved in the plant kingdom. 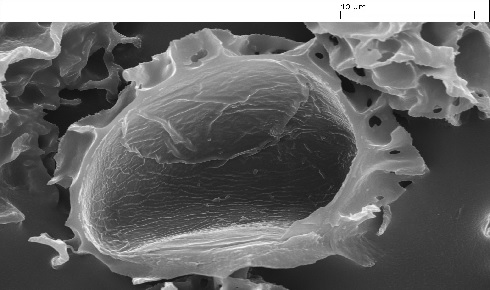 Figure 1: Scanning electron micrograph of an opened empty exine extracted from an L. clavatum L spore showing the large cavity within the exine.

Studies have so far explored using exines as particles for solid-supported synthesis, ion-exchange chromatography and the remediation of metals, and as microcapsules in drug delivery, food and cosmetics or for oil sequestration, or as microreactors and micromotors [1]. To use exines in these applications, they first have to be extracted from the pollen or spore grains.

Several types of pollen grain or spore are available to buy in bulk. These are mostly for the herbal remedy market, but in the case of Lycopodium clavatum spores they are used as pyrotechnics (ignited spores generate ‘pink lights’, now used in fireworks but also in early flash photography).

All extraction techniques rely on the high stability of the sporopollenin relative to other components within the pollen or spore grains. Techniques may include the use of strong acid alone or strong base and then strong acid (or vice versa), or digestive enzymes. The proteins, nucleic acids and carbohydrates are decomposed and are then sufficiently small enough to be removed through the exines’ channels to leave an empty cavity [8]. 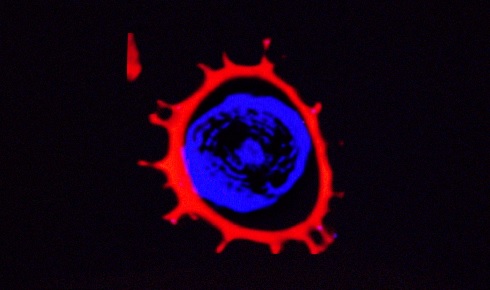 Functional groups on the exines’ surfaces can then be used or modified to change the polarity of the surface from being anionic or neutral to cationic. Various applications require an accessible cavity or chamber to house and protect the required active material (e.g. drug, cosmetic, food ingredient or dye).

Usefully, the natural channels through the exine walls usually provide the necessary accessibility. It is through these channels that release of the active compound takes place too. Special coatings can help to retain and protect the active compound within the exine until release at the desired delivery site by a change in its environment such as pressure, temperature or pH [10]. The elasticity of exines can also be used to enable controlled or stepwise delivery of therapeutic or cosmetic agents. For example, when required, an encapsulated active compound can be released on to a surface such as skin simply by rubbing the exines.

More is being found out about the genetic and molecular regulation of sporopollenin biosynthesis, although the pathway is extremely complex [9]. Synthetic biologists at Colorado State University have received £1.7m in DARPA funding to try to biosynthesise sporopollen in large quantities directly from plants. Rather than creating microcapsules, their goal is to produce tough coatings that could one day protect ships, bridges and other types of infrastructure that crack as they age.

Evolution has led to pollen and spore shells with remarkably versatile properties unique in nature. The exploration of sporopollenin microcapsules is still in its infancy, but it will be interesting to see what the future holds for these natural, renewable and potentially recyclable materials.

Grahame Mackenzie is reader in bioorganic chemistry at the University of Hull and research director of Sporomex Ltd, a university spin-out company developing pollen-based microcapsules.

Dr Terry Corbitt is the Managing Director of Sporomex Ltd.