This summer marks 50 years since humans first walked on the moon. Colleen Deane and Nathaniel Szewczyk explain why now is an exciting time for UK space science, and how bioscientists and citizen scientists alike can help study life in space

From Sir Isaac Newton’s celestial mechanics to Lord Kelvin’s support of panspermia theory in the time of Darwin, the UK has long been an international leader in shaping space science.

For much of the modern era, though, the UK was careful not to over-invest in space. Perceiving the use of the International Space Station (ISS) and the European Space Agency’s (ESA) astronaut corps as too costly, and with little to no economic return, the UK originally chose not to get involved in these activities. UK researchers hoping to participate in these projects mostly had to move abroad.

However, since 1999 the UK space industry has grown at five times the rate of the wider economy year on year and has now tripled in value. A 2018 report from the London School of Economics placed the UK space industry’s income at £14.8bn, with a workforce of 117,000 [1]. The success of the British National Space Centre in growing the UK’s space-based economy resulted in the creation of the UK Space Agency in 2010.

With the new agency came bolder ambitions for broader and more inclusive targeted economic growth, including investing in the ISS and ESA astronaut corps in 2012. This investment paved the way for UK scientists to lead experiments on board the ISS, with Tim Peake in 2015 becoming the first British ESA astronaut to visit the station.

During his six-month Principia mission, Peake became the first male to run a marathon in space, completing the 2016 London Marathon on the ISS treadmill. Peake was also involved in more than 250 scientific experiments, including 30 tests on his own body. 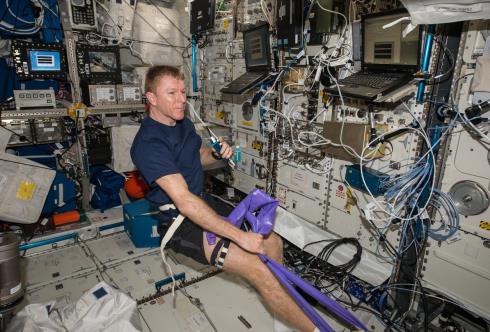 British astronaut Tim Peake takes part in the Vascular Echo experiment, looking at the effects of space on the human body (image courtesy of NASA/ESA)

One biology outreach experiment, Rocket Science, involved storing seeds from the aptly named rocket on board the ISS for several months before being returned to Earth and distributed to thousands of schools, along with control seeds from the ground. More than 600,000 school-aged children were subsequently involved in growing and comparing the seeds to see the effects of spaceflight on the growth of rocket plants.

This project is one of many outstanding contributions that Peake has made to promoting STEM in the younger generation, including the first ever broadcast from space to Parliament (and an audience of young scientists) at the RSB’s Voice of the Future event in 2016. Peake was appointed Companion of the Order of St Michael and St George in recognition of his services to space research and education.

During Peake’s mission it is estimated that more than two million schoolchildren were involved in learning about space and UK-specific space activities, which has been coined the ‘Tim Peake effect’. In 2017 ESA announced it would assign all astronauts in Peake’s class a second mission to the ISS. Although no date has yet been confirmed, it is hoped that this will sustain the Tim Peake effect.

The fact that UK researchers can now conduct research on board the ISS without having to move abroad is also inspirational. The Molecular Muscle Experiment (MME) was selected for flight by ESA in 2014 and funded by the Biotechnology and Biological Sciences Research Council (BBSRC) in 2016, with an associated PhD student funded by the UK Space Agency in 2018.

Following space-experiment validation testing on Earth, the MME launched from the Kennedy Space Center, Florida, in December 2018. This collaborative venture involving the University of Exeter, the University of Nottingham and Lancaster University invited scientists from the US, Japan, South Korea and Greece to collaborate in sending 36,000 Caenorhabditis elegans to live and grow on board the ISS.

The UK study involved testing if changes to the worms’ metabolic and cytoskeletal gene expression in response to spaceflight were caused by alterations in insulin signalling and/or mechano-sensing, as well as if drugs targeting either of these mechanisms could alter the gene expression responses to spaceflight. Unravelling these mechanisms would be a first for any space-flown animal and should aid in identifying therapies that many view as essential for humanity’s ambitions to successfully conduct interplanetary spaceflight missions.

Capitalising on the novelty of the MME, extensive educational outreach activities have been conducted[2], with the aim of building on the Tim Peake effect to increase engagement in STEM.

Like many scientific endeavours, one of the major draws of investing in space-based activities is it generates knowledge and innovations that lead to wider benefits for the UK economy. For example, in an attempt to find life on Mars, the UK led the building of the Rosalind Franklin Mars rover (part of the ExoMars project). This required developing advanced welding techniques that are now used to make aluminium cans, which is thought will save manufacturers hundreds of millions of pounds in raw materials. If the discoveries from the MME study translate into therapies in human medicine, the economic return will be much larger than the BBSRC and UK Space Agency investments.

The next project to go to the ISS will be the ‘BioRock’ experiment [3] led by Professor Charles Cockell at the University of Edinburgh. BioRock will investigate the growth of biofilms in microgravity on natural (rock) and artificial (plastic) surfaces, in collaboration with the German Space Agency (DLR) and SCK•CEN (Belgium). 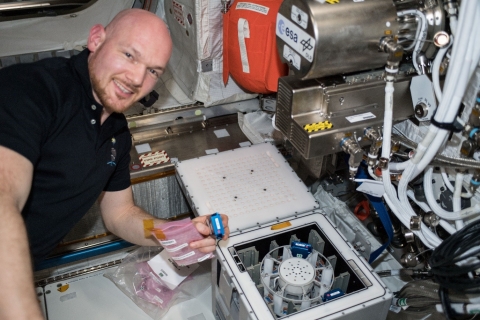 Using three different organisms, including the desiccation-tolerant soil crust-forming bacteria SphingoUmonas desiccabilis, BioRock will be the first comparative experiment between microorganisms in space. It will also investigate the release of elements such as zinc and copper from rock surfaces using microorganisms. This has applied uses for studying how microbes may eventually be used in biomining – for example, making soil from planetary regolith on Mars.

After BioRock, two further experiments that are solely designed, built and flight qualified in the UK will be conducted on the ISS. These were selected and funded by the UK Space Agency in 2018 as part of its investment to grow UK industry capability to build and fly experiments in space and are expected to fly in the 2021–2022 timeframe.

The first of these – ‘microgravity as a model for accelerated skeletal muscle ageing’ (MicroAge) – will investigate whether the failure of muscle adaptations to exercise that occurs in muscle exposed to microgravity and in muscle with age are analogous. This will require muscle cells to be cultured in microgravity and undergo an electrical stimulation protocol to induce repeat contractions.Analysis of the effects, as with most space biology experiments, will occur after return to Earth.

This experiment is led by Malcolm J Jackson, Samantha Jones, Adam Janvier, Kai Hoettges, Chris McArdle, James Henstock and Anne McArdle from the University of Liverpool. The programme is sponsored by the ESA European Exploration Envelope Programme, as well as the UK Space Agency. The payload developer is Kayser Space Ltd, an aerospace company located in the Harwell Campus, Oxfordshire.

The second experiment, the Molecular Muscle Experiment 2 (MME2), is led by the same team as the MME and will look to confirm the experimental results from the MME. Additionally, the MME2 will test the role of acetylcholine signalling, calcium signalling and mitochondrial function in muscle adaptation to spaceflight. The MME2 will also have three UK student-led investigations and additional experiments proposed by international collaborators.

As with MicroAge, the payload developer is Kayser Space Ltd. The MME2 team hope that establishing Kayser Space as the first UK-based company with a track record of successfully flying a space biology payload will highlight the UK’s ability to provide commercial access to the ISS, as well as to develop payloads for ESA. 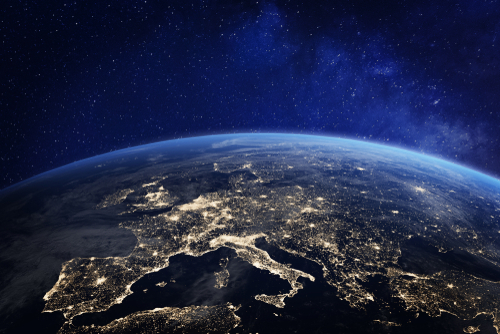 Getting involved
Scientists can get involved in UK science programmes in several ways. Firstly, academics can apply through ESA to use facilities that mimic microgravity such as parabolic flights, drop towers, on-board centrifuges and clinostats.
NASA, and occasionally ESA, also issue calls for research opportunities on the ISS. In either case you will need to get a letter of support for your application from the UK Space Agency, which also provides the opportunity to discuss potential funders for the experiment.
The UK Space Agency in general finances facility access (often via ESA) whereas science funding is the remit of UKRI and other science funding bodies. The UK Space Agency also offers finance for building or developing technologies for use in space, as well as space-related educational outreach activities.
A potentially faster and easier way to ‘fly’ a biology experiment is to purchase commercially available space on board the ISS, or other platforms, and cost this into a grant application to traditional finance sources. Examples of companies providing this service include: ICE Cubes, NanoRacks, Kayser Italia, and KIWI (part of Airbus). While commercial access to astronauts as subjects for human studies is not currently available, it is being discussed.
Students can also get involved in a number of ways. If you want to fly an experiment, you can use the commercial providers or participate in various educational programmes. ESA has a number of these, including opportunities to do experiments on parabolic flights or in centrifuges.
The UK Space Agency offers some funding for those who are selected for these programmes, as does the US Student Space Flight Experiment Program for international candidates.
If you want to learn more, you can participate in ESA summer schools or the Space Camp. You can even take an undergraduate course in astrobiology at the University of Edinburgh. This programme investigates life in its cosmic context and teaches fundamental concepts in physics and astronomy, chemistry, geoscience, biology and philosophy.
For postgraduates, King’s College London offers an MSc course in space physiology and health, which is aimed at biomedical scientists and doctors interested in gaining theoretical and practical training in the physiological, psychological and operational medicine of humans exposed to the extreme space environment. This course is the only one of its kind in Europe and includes contributions from international academics, contractors and space agencies, including NASA, ESA and the UK Space Agency.
A number of organisations and websites support students and young professionals who want to improve their knowledge, experience and space-related skills. These include the UK Space Life and Biomedical Sciences Association, and UK Students for the Exploration and Development of Space.
In addition, information on the diverse career paths into the space sector and job opportunities can be found at SpaceCareers.

Dr Colleen Deane is a postdoctoral research fellow at the University of Exeter, interested in skeletal muscle (mal)adaptation to spaceflight and ageing.
Nate Szewczyk is a professor of space biology at the University of Nottingham and enjoys helping others succeed in space science.