The Search for Lost Species

A duck with a bright pink head. The world’s largest bee, complete with giant jaws. A flesh-eating plant at the end of the Earth. A purple tree-climbing crab. These quirky, seemingly fantastical animals have at least two things in common. First, they are close to extinction (and in some cases, maybe even extinct). Second, their stories are injecting hope into the stagnant doom-and-gloom narrative that pervades conservation.

When Global Wildlife Conservation (GWC) launched the Search for Lost Species – the largest-ever quest to find and protect species lost to science for decades – our primary goal was a bold one: to inspire, spark hope and invite people on a journey to find the top 25 ‘most wanted’ lost species. The project has resulted in encounters with some of the most whimsical of our planet’s wildlife, alongside tales from biologists braving the elements around the world to rediscover them.

The idea for the programme had been percolating for years in the wake of the GWC-supported ‘Search for Lost Frogs’ in 2010, which brought the amphibian extinction crisis to life with a different kind of narrative centred around hope and adventure. However, first we had to answer the question: with no formal definition out there, when is a species really ‘lost’ or ‘found?’ 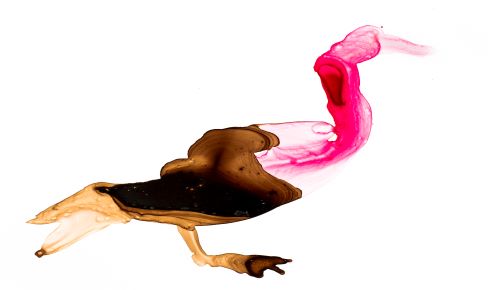 A watercolour painting of the pink-headed duck (Rhodonessa caryophyllacea), one of the project's 'most wanted' species. Once found in parts of India, Bangladesh and Myanmar but feared extinct since the 1950s, the duck eluded a specialist search team in 2017.

When lost is truly lost

When we first put out the call in 2016 to scientists heading up more than 100 IUCN Species Survival Commission Specialist Groups around the world for nominations for lost species, we didn’t know what to expect. Would scientists respond only if we could offer a strict definition of lost? Would they think these efforts were futile or a waste of resources? Would they caution us against challenging the permanency of extinction?

What quickly became clear was that we were on to something big and something galvanising. We received many excited responses. However, the question of what makes a species lost came up again and again – and in fact still does.

Is a species lost if it hasn’t been seen in five, 10, 20 years? Does it depend on the life history and lifespan of the animal or plant, so that a rediscovery could not be of the very same individual last seen? Can a species be considered lost only if we can point to the potential cause of its decline and possible disappearance? Or is a species still lost if no scientist has been to look for it in decades?The criteria that we developed for our list considered all of the above and invited scientists to nominate species last recorded by science at least a decade ago that, if found, would constitute a headline-worthy rediscovery. This resulted in a list of more than 1,100 lost species, with several categories of loss depending on the reasons behind the species’ disappearance.

First, species could be lost if they could have been driven to very low abundances by threats that include habitat loss, disease, invasive species, poaching, climate change or human-wildlife conflict.

Second, some species were considered lost because the remoteness or inaccessibility (often as a result of conflict) of their habitats had prevented biologists from venturing into them for years or decades.

KNOWN UNKNOWNS
Fewer than one in five species that have been discovered have been named and described. Of those that have, 15% are classified as Data Deficient by the IUCN Red List of Threatened Species, meaning that we don’t even know enough about them to assess their status.

Third, some species had not been recorded in decades because they appeared to be incredibly rare and/or cryptic as a result of their life history or behaviour, requiring a concerted effort to determine whether they still existed.

We then had to determine when we consider a lost species to be truly rediscovered. Does a pelt in a local market or a specimen in the animal trade constitute a rediscovery? In 2018 a Wallace’s giant bee specimen reached thousands of dollars on eBay. Did this constitute a rediscovery of the species? What about a camera trap photo? How about environmental DNA (eDNA) evidence?

While the Wallace’s giant bee specimen suggested that the bee was still out there, it was not conclusive proof that the bee species survives, as the location or timing of its collection could not be verified. We ultimately decided that in order to announce a rediscovery we needed photographic evidence of the species alive in the wild and, better yet, a reliable sighting in that wild setting. While pelts in markets, anecdotes or rumours, specimens on eBay and eDNA can be important evidence that helps point us in the right direction, we don’t consider them conclusive proof.

The Search for Lost Species was initially conceived as a vehicle for storytelling to elevate the profile of forgotten animals and plants to the status of flagships for conservation. In selecting our top 25 most wanted – the poster species for the campaign – we considered their potential for storytelling, but also looked at the significance their rediscovery would have from scientific, cultural and conservation perspectives. 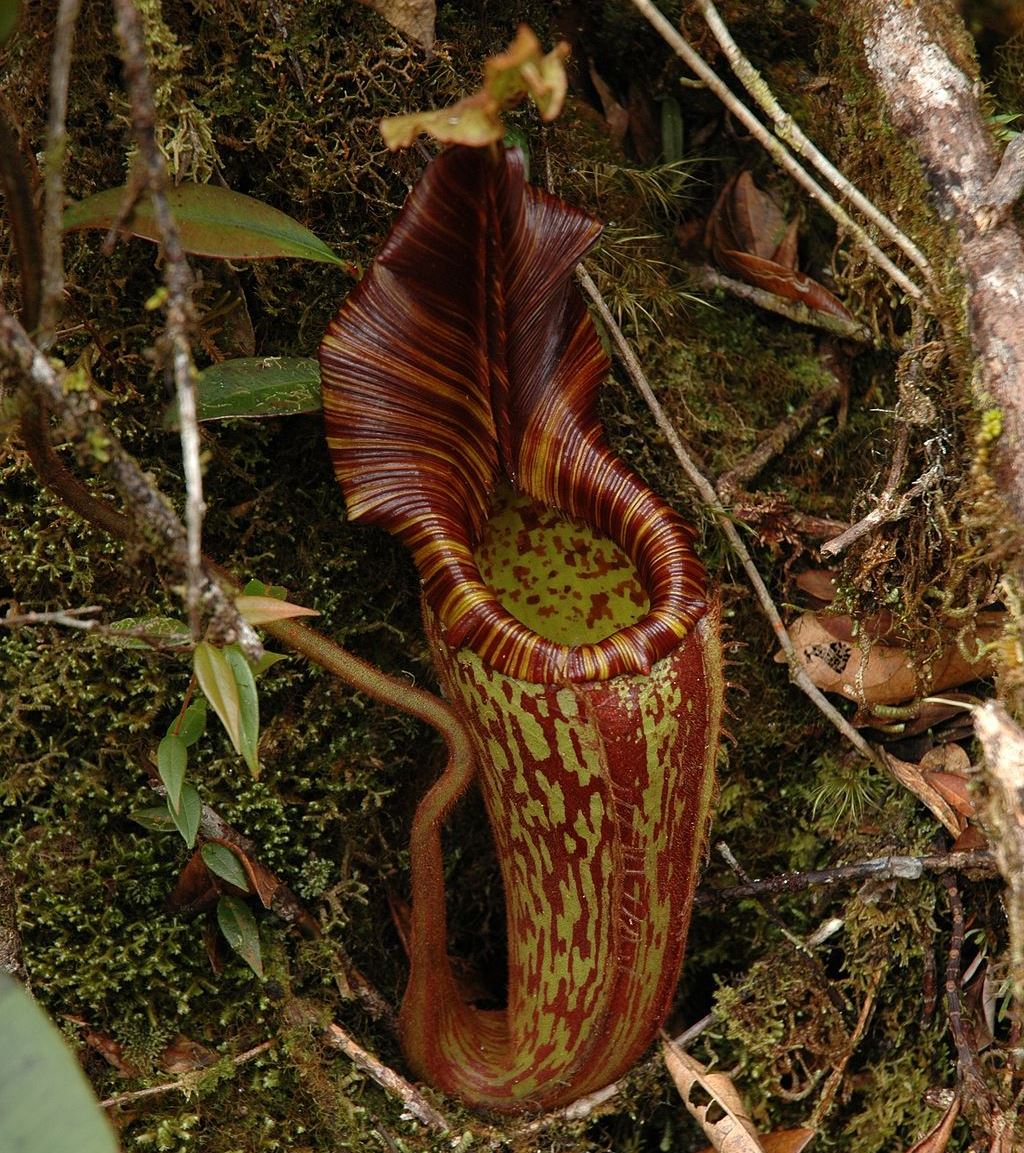 The velvet pitcher plant (Nepenthes mollis) was found by an independent team of botanists in 2019, one hundred years after it was last seen in the wild.

The first rediscovery from our top 25 list captured the essence of what we hoped could be achieved.
Forty-two years after the Jackson’s climbing salamander (Bolitoglossa jacksoni) had last been seen, a ranger rediscovered the species on the fringes of an amphibian reserve that we had helped to create in northern Guatemala. Its rediscovery and associated media attention catalysed a fundraising campaign to expand the protection of its cloud forest home to the benefit of not just the salamander, but to all the other species that share its home.

“We had started to fear that the species was gone and now it’s like it has come back from extinction,” said Carlos Vasquez, curator of herpetology at USAC University in Guatemala and co-ordinator of the amphibian conservation programme at local NGO and GWC partner FUNDAECO at the time of the animal’s rediscovery. “It’s a beautiful story and marks a promising future for the conservation of this special region.”

We often know very little about lost species, making it difficult to know exactly when and where to look for them. However, their rediscovery can unlock their mysteries to not only help us conserve them, but to add to our knowledge about life on our planet.

Such is the case, for example, for the world’s largest bee, Wallace’s giant bee (Megachile pluto). Despite its conspicuous size (around 2.5in long), the bee had been lost to science since 1981 when independent researchers found the insect on the Indonesian islands known as the North Moluccas. After that the bee was not observed in the wild again until it was rediscovered by a research team earlier this year. 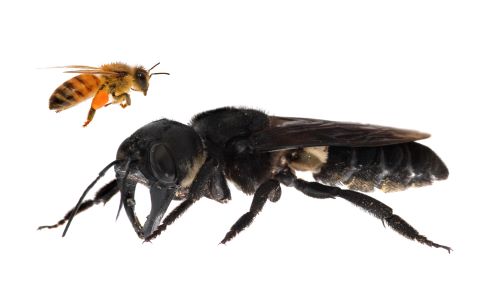 Wallace's giant bee, shown next to a honeybee for scale.

Wallace’s giant bee is known to nest in active, tree-dwelling termite mounds, so the team retraced Wallace’s steps and spent consecutive days searching any mounds they could find. On the final day they discovered a mound 8ft up a tree with a perfectly round hole in it. The team’s Indonesian guide, Iswan, later recounted that he almost didn’t mention spotting the mound to the rest of the team because they were so tired and hungry. After finding a nesting female inside, the team were able to photograph and film the bee in a fly box before returning it to the termite mound.

The exciting find has resurrected hope that more of the region’s forests still harbour this species and entomologists hope to eventually learn where the insects forage, what kinds of trees they prefer and their mating habits. “We still know next to nothing about this extraordinary insect, but knowing it’s out there is a good start,” said Eli Wyman, an entomologist at Princeton University. “I hope this rediscovery will spark further research that will give us a deeper understanding of the life history of this very unique bee and inform any future efforts to protect it from extinction.” The story of the rediscovery of Wallace’s giant bee also propelled the species to flagship status, with the resulting media reports reaching an estimated 2.4 billion people. 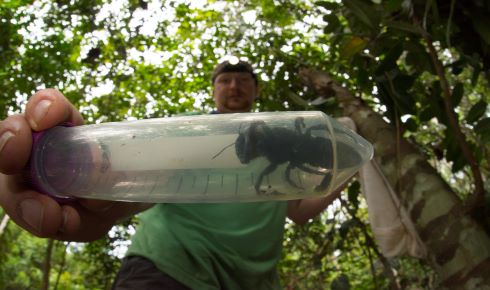 Photographer Clay Bolt with the Wallace's giant bee discovered this year on an Indonesian island. The team were able to film the enormous insect in a flight box for a few minutes before returning it to its nest within a termite mound.

In addition to Jackson’s climbing salamander and Wallace’s giant bee, we have confirmed the rediscovery of the velvet pitcher plant (Nepenthes mollis) in Indonesia, which is known only from the original specimens discovered in 1918. Botanists were unsure whether the species is found only in one location, a mountain in the most remote patch of true wilderness in Borneo.

We are also awaiting the results of genetic testing to confirm the rediscovery of the Fernandina Galápagos tortoise (Chelonoidis phantasticus) in the Galápagos – an exciting rediscovery announced on Discovery Channel’s Animal Planet show, Extinct or Alive, by outdoor adventurer and TV personality Forrest Galante. The tortoise had not been seen since 1906, and even then only one individual had ever been sighted on the least-explored island of the Galápagos.

We’ll have further exciting announcements later this year as more expeditions go out. In addition, with a number of institutional partners, we are highlighting and tracking most wanted species by taxa, including the most wanted small mammals, turtles/tortoises, birds, amphibians and primates.

The Search for Lost Species is about much more than the expeditions that GWC is directly involved in. We’re calling on others to join the quest and to embark on expeditions in search of lost species that have captured your heart. We’re continuing to work with teams and individuals the world over to publicise their stories of rediscovery and adventure as part of this shared campaign of hope and celebration.

Dr Robin Moore is author of In Search of Lost Frogs, director of communications for Global Wildlife Conservation and a Search for Lost Species programme lead.