Michael Levin’s work explores how individual cells co-ordinate into multicellular shapes. As Tom Ireland finds, this has not only led to the creation of ‘living robots’ made entirely from frog cells, but it could be used to repair birth defects, regenerate damaged tissue and reprogramme tumours

Professor Michael Levin and his collaborators made headlines earlier this year when they announced that they had constructed ‘living robots’, made entirely from embryonic frog cells, that could move around under their own power. The clusters of cells, known as ‘xenobots’, were built from a mixture of contracting cardiac cells and other, non-contracting cells, which together created the pulsing movements that enable them to move.

The work was a collaboration between Levin’s laboratory at Tufts University, Massachusetts, and researchers at the University of Vermont. An evolutionary algorithm selected the best configurations of cells for locomotion in silico, before biologists sculpted the designs in vitro from the embryonic frog cells.

Levin is currently director of the Allen Discovery Center at Tufts University and the Tufts Center for Regenerative and Developmental Biology. As well as developing living robots and other novel forms of life, Levin’s laboratory aims to understand and control how individual cells organise themselves into complex tissues and morphological shapes. The laboratory team recently managed to correct severe birth defects and reprogramme tumour cells in animal models by manipulating the subtle bioelectric currents that cells use to determine growth and shape. 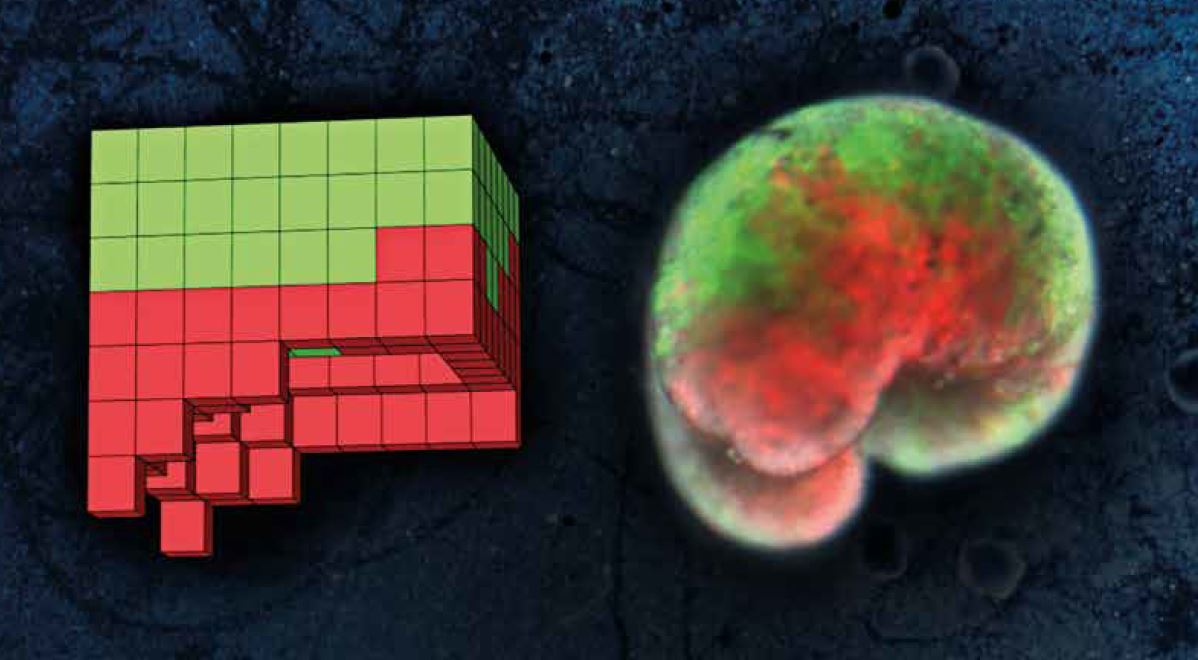 On the left, one of the computer-designed organisms; on the right, the organism built from biological tissue – skin cells (green) and heart muscle (red).

TI: Do you consider the ‘xenobots’ you created to be artificial life?

ML: Yes, I do. Not in the sense that they are synthetic cells – we have to give credit to the frog and the evolutionary process for creating the cells! What we discovered is that the plasticity of cells is quite incredible. With perfectly normal frog cells, with no genomic editing, we made very different things with a completely different anatomy and novel behaviours.

When I do talks on this topic, I show slides of the xenobots and ask the audience to guess what they think they are. You get all kinds of guesses about what sort of animal I might have found at the bottom of a pond somewhere. And then I say, well, I’ve sequenced the genome and it is 100% Xenopus laevis – a species of frog.

Cells have this amazing capability to be other things besides the default form. I think we really need to understand where this plasticity comes from, and how to harness and tame it. Creating these synthetic organisms is a great way to do it.

This work is the result of a very close collaboration with Joshua Bongard (University of Vermont). Other laboratories and groups have tried to make synthetic moving machines using cells, but what was unique here was that we did not build a specific scaffold where we knew what the motion was going to be like. We let the cells evolve and organise on their own. So this is highly emergent and not predetermined by the engineer.

It’s amazing to think that this is perhaps the only creature on Earth whose immediate evolutionary history occurred on a computer, not in the biosphere. 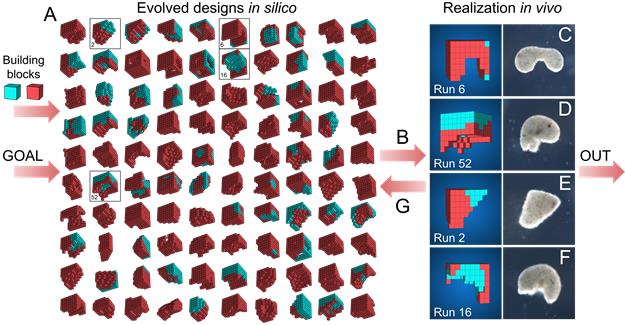 An evolutionary algorithm was run 99 times from an initially random population of designs, each time selecting the best designs for a certain behavioural goal. The most robust designs were constructed from Xenopus cardiomyocyte and epidermal cell progenitor cells, and their behaviour on a petri dish was compared to the predicted behaviour.

Why is being able to control morphological shape so important?

In biomedicine many problems could be solved if we understood how to motivate cells to build large-scale structures: birth defects, tissue damage, tumour reprogramming, ageing, degenerative disease – basically everything except infectious disease. In robotics, understanding how to get soft robots and robot parts to co-operate with one another towards flexible goals would also have massive implications.

However, beyond these practical things there are some very basic foundational issues around this question of what constitutes a cognitive system. We are asking how swarms of competent agents work together to pursue large-scale goals. And how we can not only understand this process, but learn to control it. This fusion of many into one is, I think, one of the foundational problems across disciplines and that is what my work focuses on. 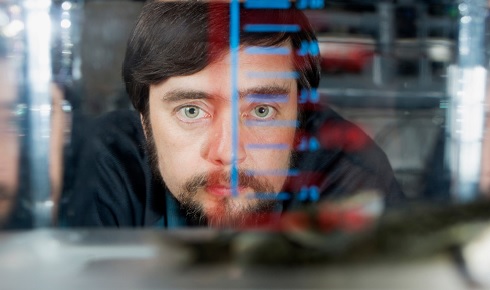 Levin's work explores how individual cells co-ordinate into multicellular shapes. By manipulating the bioelectric states of cells, his lab has managed to reverse birth defects in model organisms

We all believe that our brains and nervous systems are the seat of cognition, but the fact is that biology was doing memory, learning, problem-solving and decision-making long before brains and neurons evolved. We now know that single-celled organisms – slime moulds, yeasts, plants, bacterial biofilms – are able to make decisions to anticipate future events in their environment from a history of past experiences.

It is not the case that we have some systems that are truly cognitive, and everything else is just biology and chemical mechanisms. If we take evolution seriously, what we actually have is a continuum of different scales of minds, which operate on different problems and have different computational capacities, going all the way back to molecular networks and maybe even before there were cells.

Can you tell me a bit about your efforts to study and control morphology with bioelectricity?

Evolution discovered very early on that electrical circuits are a convenient way to do memory, distributed computing, integrated decision-making, all of these things. It’s not an accident that all of our computer technology is based on this, that our brains are based on these principles.

If you take everything you know about neuroscience and simply slow down the time axis – so that instead of milliseconds, you’re talking about hours – non-neural cells do the same thing. In the same way that neurons build up an electrical gradient using ion channels, every cell in the body has ion channels and ion pumps and can create the same kind of electrical gradients. Neurons specialised and speed-optimised this, allowing faster long-distance communication and spiking, on and off. 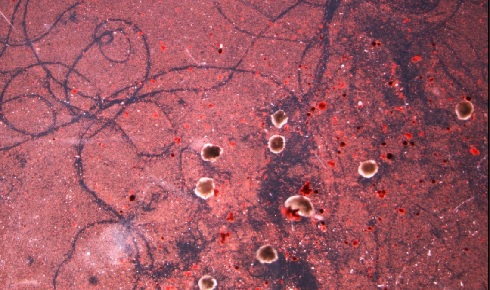 Other cells change more gradually and continuously. These gradients can then do things such as move morphogens [developmental signalling molecules] around, and cells can share electrical states with each other. So you can think of cells in a tissue as a kind of neural network, except that it is not neural!

In 2000 we created the first tools to allow us to listen in and manipulate the electrical conversations that non-neural cells are having with each other. It turns out that during development, during regeneration, during cancer suppression, all cells are forming these electrical networks.

What we found is that some very important information is processed by these electrical networks, including information about growth and form, i.e. shape. We’ve developed tools to manipulate the decisions that these electrical circuits make so that you can control morphogenesis during development. We’ve shown fixing of birth defects, we’ve shown induction of regeneration, and we’ve shown reprogramming of tumours to normal tissue.

To clarify, you presumably induced birth defects in model organisms and then were able to correct them by manipulating the bioelectric states of certain cells?

Correct. We have a computational tool that allows us to ask which ion channels you need to open and close if you wanted to change the electric circuit in these ways, and what effect it would have. We’ve shown repair of genetic birth defects as well as teratological defects induced in frogs, and now we’re moving on to mice. We hope this will be at some point an actionable strategy for repairing birth defects in a biomedical setting, and the same with regenerating lost organs, reverting tumorgenesis and so on.

What organisms and tissues do you tend to work with to study these questions and why?

Our laboratory is a zoo. We have frog embryos, flatworms, ants, slime moulds, bacteria, human cells in culture, organoids… In the past we’ve had zebrafish, plants and axolotl. The frog embryo is nice because it develops outside the mother’s body right there in front of you from fertilisation as it develops and then undergoes metamorphosis from tadpole to frog.

Flatworms such as planaria regenerate every part of their body, so they have this kind of holographic ability where every piece of the worm knows what a proper worm is supposed to look like. They also allow us to ask questions about the nature of memory because, for example, you could train planaria for specific memories and then ask the brain to regenerate from scratch and look at what happens to the memory during brain regeneration and remodelling.

And, of course, another model system is the computer. I do a lot of in silico work and simulation to understand broader rules of computation that transcend specific model systems.

What are your broader goals when it comes to studying artificial life?

To me artificial life is the effort of trying to understand what is true and fundamental about living systems. I’m not just interested in the details of any one particular organism; I would like to have general principles of organisation and co-ordination and control that are going to be applicable to any life that we find, in other places or in synthetic biology.

We don’t try to make artificial living cells as some people do, although that is very interesting work. We start with existing cells and we ask questions about plasticity and information processing. What do the cells want to do on their own, in terms of co-operating together to build something, and how do you modify them if you want them to do something slightly different? Or significantly different? What inputs or experiences could we give the cells to get them to do something completely different? Different anatomies, different repair capabilities, new behaviours. That’s our take on the artificial life question. It’s a kind of synthetic morphology, not just the synthetic biology of rewiring a single cell.

What are your next ambitions for the xenobots?

Our long-term goals are to understand how the result of cellular behaviour gives rise to specific shapes. We’re going to try to understand that and move it a little bit into biomedicine. So we’re interested in tumour reprogramming, limb regeneration, craniofacial defects. With the Vonguard laboratory we’ll be taking these principles into robotics, building robots that are competent on multiple scales – that is, the parts of the robots can recognise each other and work together, and the robots can work together.

These xenobots also have some possible practical applications. You could imagine [them doing] things like cleaning up or recording levels of pollutants, collecting microplastics or scraping plaque off artery walls. Or maybe abrading very fine layers of calcium deposits to the exact right shape in a joint. However, the big picture is much wider than that.

Artificial intelligence approaches today are really focused on a very neurocentric view. I think one way to achieve general intelligence may be to back off from the very specific architecture of brains, and ask how all cell groups implement learning and problem solving in the control of growth and form. This is what we’re going to do.

Read more about the Levin Lab at Tufts University.