Could we bioengineer trees to grow quicker and store more carbon? Sophie Young explores the challenges of introducing the more efficient C4 photosynthesis into non-C4 plants

Just three of the world’s top 10 crops – maize, sorghum and sugarcane – use C4 photosynthesis. As such, it has long been recognised that if more of our most-consumed crop species used C4 photosynthesis, it could have a radical effect on global food security. However, a less well-discussed topic is how the lack of C4 photosynthesis in forest tree species, which are important both economically and in terms of carbon storage, has impacted and continues to impact habitats across Earth and global carbon sequestration.

Ongoing research aims to provide insight into the possibility of engineering the C4 pathway into C3 plants and investigate the reasons behind the rarity of C4 photosynthesis in trees.

Since the discovery of C4 photosynthesis over 50 years ago, plant lineages from 19 different families (including the Poaceae, Chenopodiaceae and Asteraceae) have been observed to have evolved this photosynthetic pathway, representing nearly 70 independent evolutions of the C4 state[2]. The evolutionary transition to the complex C4 type of photosynthesis from the ancestral C3 state involves the acquisition of a number of modifications that set up a ‘carbon shuttle’ to concentrate CO₂ around Rubisco, the central enzyme of photosynthesis.

This CO₂ concentrating mechanism is beneficial because Rubisco is inefficient at catalysing photosynthesis: when exposed to both carbon dioxide and oxygen it cannot differentiate between the two molecules. This means that it sometimes catalyses an oxygenation reaction, where oxygen rather than CO₂ is combined with the RuBP molecule, creating toxic by-products that must be rescued in order to return RuBP to the Calvin cycle.

This process, known as photorespiration, reduces photosynthetic efficiency for three reasons. First, it consumes RuBP that could otherwise be used in photosynthesis. Second, oxygen competes with CO₂ for Rubisco active sites. Third, it releases previously fixed carbon and nitrogen as CO₂ and ammonia respectively.

The inefficiencies of C3 photosynthesis 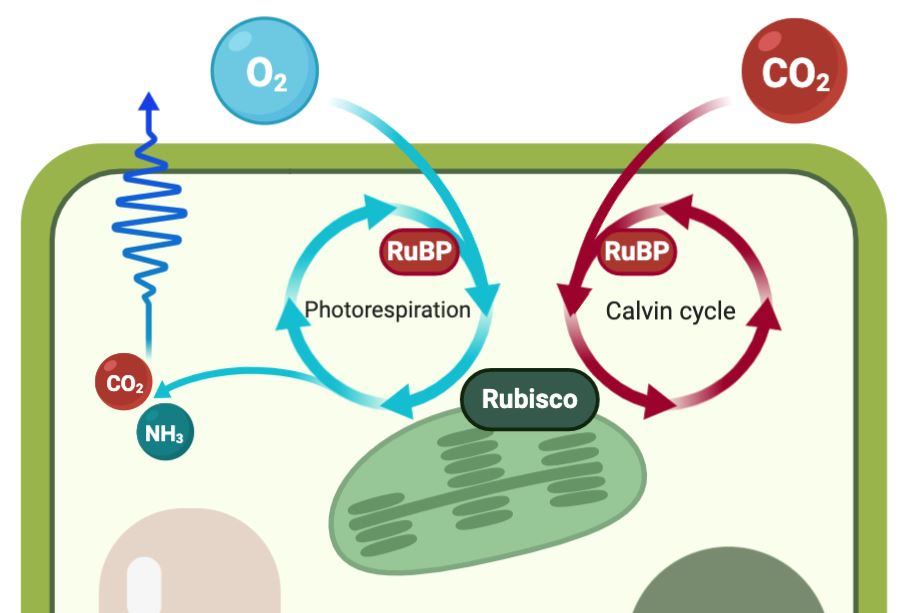 Photorespiration by C3 crops is socioeconomically costly: photorespiration by soybean and wheat crops in the US accounts for a total loss of 148 trillion calories, which is equivalent to the yearly calorie requirements of 203 million people[3]. This photorespiratory inhibition of photosynthesis increases with reduced atmospheric CO₂ concentrations and increasing temperature, and results in reduced water- and nitrogen-use efficiency. Thus, the C4 CO₂ concentrating mechanism, which largely avoids photorespiration, is most advantageous under hot and dry conditions.

This is reflected by the dominance of C4 vegetation in environments such as savanna grassland and arid scrubland[4]. While C4 plants will not benefit directly from rising atmospheric CO2 enhancing photosynthesis (as is the case for C3 plants where photorespiration is reduced), they will perform better under the higher temperatures and increased incidence of drought that are associated with higher CO₂ levels in the atmosphere. 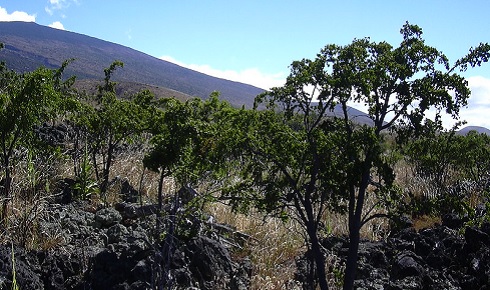 C4 trees such as Euphorbia olowaluana are rare (image courtesy of Kim Starr) and do not tend to form forests.

Given that C4 photosynthesis makes plants more efficient in their use of water and nitrogen through minimising photorespiratory losses, scientists have recognised the potential benefits of using genetic engineering to introduce C4 photosynthesis into C3 crops. This effort is currently directed primarily towards rice, which accounts for 19% of all calories consumed globally[5].

The C4 Rice Project aims to make rice more productive and thus generate higher yields for the same area of land and inputs of water and fertiliser. However, projects such as this are challenging due to the high number of modifications required to produce C4 photosynthesis and the need to understand the genetic basis of these modifications.

To achieve true C4 efficiency, leaf anatomy must be altered so that there is an increased proportion of veins and associated bundle sheath tissue compared with the mesophyll tissue (which conducts the bulk of photosynthesis in C3 plants). The bundle sheath also needs to gain a large number of chloroplasts, the organelles that carry out photosynthesis, while the C4 enzymes must be localised to the mesophyll to set up a CO₂ 'shuttle'.

We do not understand fully how these modifications are regulated, but the urgent need to increase global rice yields means engineering attempts are occurring in parallel with new discoveries about the regulation of C4 photosynthesis[1]. If the C4 Rice Project is successful, engineered rice could be up to 50% more productive than C3 rice, which is a significant increase compared with traditional breeding programmes, which are currently achieving approximately a 1% increase in yield per year.

C4 photosynthesis makes grass crops more productive in warm environments, so it is not unreasonable to suggest it could do the same for trees, particularly in the tropics and subtropics. Forests draw down carbon from the atmosphere and store it, and increasing global forest cover through reforestation and creating new forests has been a long-standing goal in slowing global climate change. If a forest was more productive, it would be more efficient at sequestering carbon and thus be an effective tool in increasing carbon drawdown from the atmosphere. C4 photosynthesis could also increase productivity to help meet increasing global demand for biomass crops, such as timber.

However, C4 photosynthesis is notably rare in trees and C4 plants do not form forests. The few C4 trees that do exist are native to the Hawaiian Islands, only reach approximately 9m in height and are not dominant plants in their biomes. In fact, most of the seven tree taxa that have evolved C4 photosynthesis are federally endangered or observed to be rare. So, by measure of abundance or productivity, C4 trees do not appear to be successful in the way that C4 grasses or herbs are. 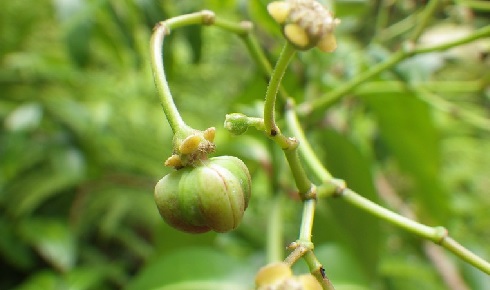 There are several theories emerging on why C4 trees, such as this Euphorbia herbstii, are so rare (image courtesy of Maggie Sporck-Koehler)

Why are C4 trees so rare?

We don’t currently know why C4 photosynthesis is so rare in trees, nor why the trees that do use C4 do not appear to grow more quickly or perform better than C3 trees, although there are many theories.

It may be difficult for trees to transition from C3 to C4 photosynthesis, as the typically longer generation times of trees mean more evolutionary time is required to accumulate a ‘pool’ of duplicated genes that appear to be important in the transition to C4 photosynthesis[6]. Equally, transitioning from the herbaceous to tree life-form may be difficult for a C4 plant, as the C4 state may reduce adaptive plasticity[6,7].

It has also been suggested that C4 trees can’t form forests because they perform poorly in the shade.
C4 plants generally do less photosynthesis per photon of light incident on their leaves compared with C3 plants. However, three of the C4 tree taxa in Hawaii are able to live in the forest understorey and seem as well adapted to the shade as equivalent C3 plants. This may mean that it is not shade tolerance that limits the ability of C4 trees to form forests, but some other factor that is yet to be recognised.

One possibility is that C4 photosynthesis could affect the ability of a tree to transport water and sugars, especially over the long distances required by tall trunks, and so the height of C4 trees may be limited much more than for C3 forest-forming trees.

Ongoing discoveries in the field of C4 photosynthesis and advances towards engineering C4 rice mean that there is a definite possibility that we will see the C4 pathway become more widespread in our most grown crops this century[8,9].

The higher water- and nitrogen-use efficiency of theoretical C4 rice means that the same yield of rice can be achieved for lower inputs, and the mechanism would also help in ‘future-proofing’ crop yields against the rising temperatures associated with global climate change. As such, if C4 rice could be successfully engineered, its uptake by the agricultural industry would likely be high.

Progress towards understanding the rarity of C4 trees has been limited since the discovery of the Hawaiian C4 trees in the 1970s. Nevertheless, new research avenues, such as examining the interplay between the photosynthetic and hydraulic systems in C4 trees, may yet yield interesting findings, especially in the context of increasing drought risk to forests with climate change.

However, until we understand more about the physiology of these trees, and of other species that are potentially on the evolutionary path to becoming a C4 tree (such as C4 shrubs or as-yet-undiscovered photosynthetically intermediate ‘C3-C4’ trees), there is no reason to suggest C4 trees will become widespread on our planet now or in the future.

Nethertheless, it is interesting to consider how our world would look if C4 trees had evolved earlier and been able to form forests. Savannas and grasslands across the world that are dominated by C4 grasses could instead have been home to C4 forests. In addition, the C3 forests of the tropics and subtropics may also have been replaced by C4 forests.

If C4 trees were abundant across the low latitudes of our planet, the world could look very different. The reduced reflection of sunlight (albedo) and higher evapotransporation by forests compared with grasslands could have resulted in wetter local climates in low latitudes. Increased global forest cover would not only have meant greater forest carbon storage, but could also have had implications for the evolution of species that evolved on open grassland, including grazing animals and their predators, as well as humans. In other words, the rarity of C4 trees and their apparent inability to form forests seems to have been integral to shaping the evolution of the human race[10].