How much do we really know about our pets? Cat behaviour expert and presenter Roger Tabor documents the progress made in tracking small cats

When it comes to studying the behaviour of cats, we are in an exciting era. Mini-GPS and mini-cameras allow us to record their movements with precision, changing our understanding of their distribution and behaviour yet also supporting existing findings obtained by different methods.

Historically, most studies of big cats involved shooting them and pug mark (footprint) identification. The areas big cats covered, often at night, limited progress. In the 1960-70s radio transmitter collars were developed, but the equipment size limited their use to large species: tigers were first radio-tracked in 1973 at Nepal's Chitwan National Park.

While the use of radio-collars was a big step forward when tracking species over rugged terrain or in dense jungle, location points could only be made with confidence occasionally, as signals could be bounced, reduced or too weak to detect.

While I had the good fortune to observe the tigers in Chitwan, my own study animal was the domestic cat in the UK, for which such equipment was much too large and heavy. When I carried out observations at a number of sites in the 1970s, I focused mainly on the home ranges of a group of feral living cats in central London's Fitzroy Square and domestic living house cats in Barking, on the east side of London.

The only others monitoring domestic cat ranges in the UK at the time were David Macdonald and Peter Apps with farm cats in south west England, and Jane Dards with dockyard cats in Portsmouth.

It was necessary to have the cats' acceptance plus good vantage points when observing house dwelling cats as well as feral cats. So in Fitzroy Square (as viewers of the BBC's QED programme Walk on the Wildside saw), I was able to readily locate cat positions according to the regular grid of the paved areas of the square. From convenient positions I could observe most of the square and so continually follow the cats' locations for considerable periods. I also followed individual cats using field skills that I developed to avoid disturbing them – I would observe without appearing to look at them directly. When settled, cats would give heavy lidded blinks, so I used this to diffuse their anxiety about an observer.

At the time domestic cat home ranges had not been established in either area or pattern, so it was fascinating for me to see similarities in my findings with those of Macdonald, Apps and Dards. Males generally had larger ranges than females, and urban ranges were smaller than rural. (An average female housecat in high density Barking inhabited only 0.029ha, while the West Country farm females roamed around 6ha.) With this handful of studies, and figures from a study in New York by Carol Haspel, I demonstrated a straight line relationship for one sex between cat density and home range size, which was later supported with a greater number of studies.

I was delighted to see that the factors influencing ranges for tigers were the same for the tabby cat. Males generally had larger ranges than females, and abundance of food was the key factor dictating range size. Yet for domestic cats, the contrast of range sizes is much greater – from feral cats in arid habitat to housecats in high density urban areas with a superabundance of food, there is over a thousand- fold difference.

Yet there were limitations to the visual monitoring of domestic cats – it could only be done in specific urban situations with good visibility of much of the cat's small range. To meet the problems of most locations, where cats are often obscured, lighter versions of the radio- transmitting collar were developed, achieving weights of around 25g, around 1% of an average cat's weight. Many studies were undertaken on feral cats, including in remote island conditions. However, just as with tigers, the radio-tracking of small cats produced sporadic location data.

As radiotelemetry tended to yield only a limited number of location fixes, the shape and size of a cat's home range was estimated using mathematical techniques such as the Minimum Convex Polygon method. When studies began to use this technique as standard, it allowed comparison of different ranges. 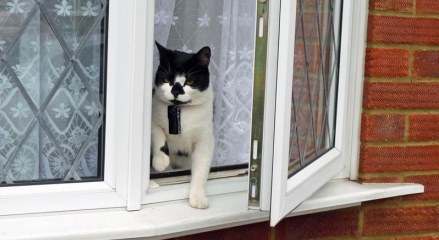 Denis leaves the house with his camera

Satellite telemetry, or the Global Positioning System (GPS), initially also had cumbersome kit. But it overcame many of the problems associated with someone having to track signals with an antenna in difficult terrain. Only recently have lightweight transmitters (acceptable 25g weight, suitable for small cats) become readily available. But just as with radio collars, GPS can generate signal errors, buildings can block signals, and any loss of sky view can affect fix success. Radio positioning had accuracy issues (at times of up to 100m), but commercially available GPS units are only accurate to the nearest 5m – not handy when monitoring very small ranges.

However, GPS units are a great tool – they can establish the quantity of data in a day or two, which might have taken months to establish before. GPS results have also produced nearly identical results to my field work from 40 years ago, but without a human presence near the cats.

In 2011, I led a study for Bayer called 'The Secret Lives of Cats'. The development of small digital cameras of the same weight as GPS units made even greater progress possible. Our study revealed not only how cats use different areas of their ranges, but the interaction between cats. Cats spend much of their time defending their territory against other cats and we witnessed the heavy lidded blinking used to indicate when others are not a threat. A cat's range is the area in which it normally roams, while its territorial boundaries are those that it defends against an intruding cat and are normally smaller.

Although GPS has improved, data are still about probabilities of position, while the camera shows exactly where the cat is located. We can see not only the size of the range, but that cats stick to set paths on which to move about, producing a real range map, not a mathematical estimate. We found that in rural areas, cats like Freddie and Maxwell (see box below) roamed a much wider area than those in dense urban areas.

In the wild, cats tend to be nocturnal, hunting during the night when their prey is awake. However, our report shows that many domestic cats shift their activity to when their owners are about. We also found some cats under territorial stress (due to high densities of other cats) may increase their range even further. This was shown with Maxwell, who shared his street with around 10 other cats. He had a tendency to disappear for a day or two at a time, sometimes even a week.

A new generation of GPS/ camera collars now incorporate accelerometers and gyroscopes to detect movement, but also control power use. And camera trapping (where hidden cameras monitor areas or are triggered by an animal's presence) is proving invaluable with wild species of cats as an alternative to radio tracking or GPS, for both necessitate anaesthesia, which carries risk. Camera trapping is being used to establish identity, density and idea of ranges of tigers and has produced spectacular successes for small, rarely encountered species. The Borneo bay cat (Pardofelis badia), for example, at one point was being declared extinct, and our knowledge of it was primarily from a few skins. But in the last few years, digital camera traps have established a far better knowledge of its distribution and produced the first live footage of it in the wild.

I was once fearful that many small wild cat species would become extinct because we knew so little about them. But the technology available to us now is yielding valuable insights. The behavioural closeness of the cat family makes our growing knowledge of the domestic cat a good model to aid interpretation of other feline species. 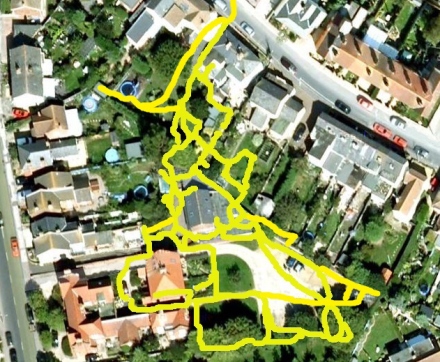 'The Secret Lives of Cats' was a study carried out by the author for Bayer in 2011, and its results were featured on the BBC. It brought together an all-star cast of cats, with varying habits when it came to roaming and exploring.

One of the 'stars' was Freddie, who inhabited a 2.5-hectare range and spent most of his time in and around the farmhouse and outbuildings. Little John, also a neutered male who lived in similar circumstances, ranged over 5.6ha from his Midlands farmhouse. GPS revealed that both seem to range along the hedgerows around the surrounding fields rather than in the fields.

Scrumpy, a neutered Essex town cat, moved about along well-known set paths, which produced a real range map of usage (right) and not a mathematical estimate. Despite being well fed and a keen hunter, the camera showed she regularly scavenged from a waste bin in a yard. The camera also revealed that she entered another person's home, and regularly entered a garden at the furthest edge of her range lived in by rottweilers, where she saw off the more local cat. Her unknowing owners called her 'sweet natured'.

Roger Tabor CBiol FSB is a television presenter, biologist, author and cat behaviour expert. He has presented a range of shows, from the BBC's Countryfile to Cats, a documentary series filmed over three years and shown around the world. He has written books on cat behaviour and herbs and is also vice president and chairman of the British Naturalists' Association.