Cryobiology is the study of how low temperatures affect organisms, biological systems, or biological materials. Research uses temperatures ranging from slightly lower than normal (hypothermic) to cryogenic (−150°C and lower).

Why is cryobiology important?

Low temperatures have been used in medicine and to prevent food spoilage since ancient times. Nowadays cryopreservation (freezing) is used in fertility treatment, the transport of human organs, and the long term storage of biological specimens, either for future study or simply as a record of biodiversity.

Certain bacteria can survive thousands of years in extremely cold temperatures, while many plants and animals have interesting adaptations to prevent their tissues freezing. Cryogenics is a field outside mainstream cryobiology, which involves freezing human bodies or body parts, such as the head, in the hope of future revival. This remains a distant prospect.

What careers are available?

Cryobiologists work in a range of industries and research areas. There are many industrial and medicinal applications of cryopreservation (see interview below) and low temperatures are used in a range of direct medical treatments, from minimally invasive 'cryosurgery' to simply freezing warts off. Careers are available developing the tools and technology of these processes as well as in the research labs and industries that use them.

The study of cold-adapted organisms and the effect of low temperatures on biological material is also a huge area for research, with many applications in industries such as agriculture, for example protecting plants from frost. Cryo-electron microscopy is a special research tool that allows scientists to study biological materials without fixing them or staining them.

Where can I get more information?

What does your research involve?

I develop cryopreservation techniques for preserving the sperm, eggs and larvae of the commercially important shellfish species we have here in New Zealand – green shell mussels, pacific and flat oysters, abalone and geoducks (Panopea generosa), a large edible clam. I'm developing the freezing techniques and making them robust enough to apply in selective breeding.

Inducing mussels to spawn for breeding

How does cryopreservation help selective breeding?

Being able to store the embryos or sperm gives breeders more control – you can make crosses on demand between particular individuals and it provides a bank or library of your most valuable individuals that you can go back to, which is important if breeding objectives change. It also means you can create a reference family you can use to compare across generations, instead of using a bunch of wild families as a benchmark.
Mostly the industry is looking to breed shellfish with a high meat to shell ratio, but also it's about making really nice looking oysters. Oyster herpes had a huge impact on the industry recently so a lot of their focus is on developing disease resistant lines.

Do you eat a lot of seafood or has it put you off?

I don't like oysters! I've tried geoduck sashimi, which was really nice. They have this long sort of neck called a siphon and you slice it up and eat it raw.

How do you freeze the shellfish embryos and sperm?

We use chemicals called cryoprotectants to protect the cells while they are cooled. Antifreeze (ethylene glycol) is used as it lowers the temperature at which the water in the cell freezes. Some work outside the cell or stabilise the membrane. These chemicals are often toxic to the cell and their effects vary so we play around with different amounts for each species.

It is also important to control the rate of cooling and warming. When ice forms in the extracellular space, it draws out water from the extracellular solution. Water is drawn out of the cell too. If we cool the cells sufficiently slowly to an intermediate sub-zero temperature (about -30 to -40) then almost all of the water moves out of the cell and eventually when we plunge the cells into liquid nitrogen, the cytoplasm of the cell is sufficiently concentrated that it vitrifies (forms a glassy state). If there is still lots of water inside the cell, ice will form intracellularly and that kills the cell. Equally if we cool really, really slowly we expose the cell to high solute concentrations and can damage the cell that way. 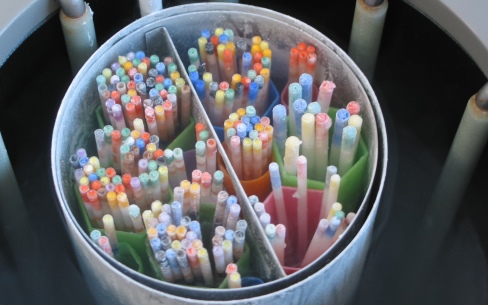 Samples are frozen in straws with liquid nitrogen

The term 'cryobiology' conjures up images of a classic science lab with lots of dry ice fog and bubbling liquid nitrogen. Is your lab like that?

Ha ha, yes. Half of what I do is like witchcraft, half of it is science. There is a lot of mixing together various cryoprotectants and we use dry ice, liquid nitrogen and specially controlled freezers. We also make little rafts out of polystyrene that float the specimens just above the liquid nitrogen. The thicker the raft, the slower the rate of cooling.

It is such an interdisciplinary field. When you go to a cryobiology meeting there are so many interesting people, in such a diverse array of fields, applying it in so many ways.