The scientists behind the big genetics breakthroughs of the last century couldn't have imagined that, by 2014, extracting, sequencing and modifying DNA would be simple and cheap enough to try at home. However, as techniques such as PCR (polymerase chain reaction) become less expensive, faster and more refined, a growing number of DIY biologists and amateur labs are conducting increasingly sophisticated experiments, many involving DNA profiling and even basic genetic engineering.

The movement is taking genetics out of research labs and into the hands of the public, from evening classes spent extracting strawberry DNA with rum (and drinking the spare reagents as cocktails) to so-called 'biohackers' making GM microorganisms in homemade labs. There is even an artist who uses DNA from discarded hair, chewing gum and cigarette butts to make reconstructions of what the samples' owners look like (see Faces in the code).

Hacker (hobbyist) noun 1. Someone who makes innovative customisations or combinations of electronic and computer equipment

DIY biology is now an umbrella term for people doing all manner of biology experiments in unconventional settings. Those at its core claim it is about educating the public and making biotechnology open source and patent free, but as more amateurs set up their own gene labs, the scene is inevitably plagued by concerns about safety, ethics and biosecurity. The movement takes its name from DIYbio.org, an online group formed in 2008 by biology graduates Jason Bobe and Mackenzie Cowell. It is also referred to as biohacking, as many people do it for the fun of reverse engineering and modifying technology, which was the original definition of 'hacker' before computer hacking became synonymous with malicious intent.

DIYbio.org's discussion forum now has over 3,500 members, sharing tips for resources, workshops, experiments, trading equipment and reagents, and discussing the ethics and future direction of their endeavours. We are not talking simple undergraduate experiments, here. The list of DIY biology projects in progress at any one time is impressively ambitious (and usually wonderfully bonkers).

There are instructions on how to make glow-in-the-dark bacteria, homemade centrifuges, water baths, plasma generators and nanoscale 'bio-printers', and how to do fish-hacking (listening in to the electrocommunication behaviour of weakly electric fish) to name just a few. Even stranger is the more niche and distinctly sci-fi 'DIY body-enhancement' scene. At the moment, this mostly involves people implanting magnets or sensors into their flesh, but could one day lead to more sophisticated modification of the body and its senses. 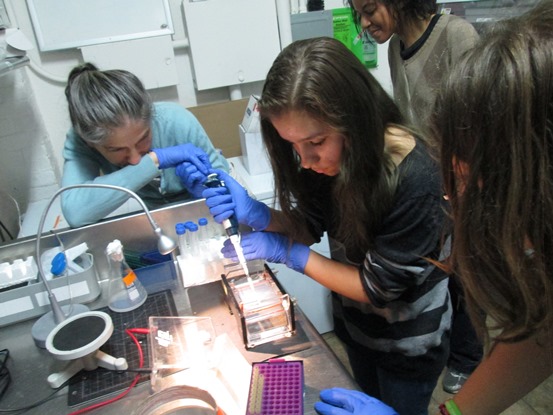 Amateur biologists work at the Genspace lab in New York.

Many DIY biologists are inspired by awards such as the international synthetic biology competition iGEM and the io9 Mad Science prize. Both encourage teams to build synthetic life forms from so-called biobricks – that is, standardised DNA sequences that perform certain functions when incorporated into living cells. This 'gene-hacking' movement has many parallels with the computer programming and coding scene, with people trying out different sequences of DNA to produce organisms with useful functions or novel features. Less-complex citizen science projects also fall under the DIY biology umbrella, with armies of volunteers involved in projects to identify, track or count the population of certain species.

As the number of people interested in amateur science grows, hundreds of 'hackspaces' are popping up around the world (see DIY biology around the world), each with the goal of demystifying science and providing a space for experimenting.

Former biotechnology researcher Ellen Jorgensen founded New York's Genspace in 2009 after the lung cancer research lab she worked in closed down. She was inspired by the ambition of the people on DIYbio.org and the ethos of amateur biology. "I thought it was great that people were doing what I loved as a hobby," she says. "I did not expect them to make much progress and they might hurt themselves, so I thought that could be something I could facilitate."

Jorgensen got her old lab to donate some equipment and Genspace started with demonstrations of simple genetics techniques. "Gel electrophoresis is a workhorse technique, and I had never really thought about it until I did it in front of lots of people in someone's living room. They were spellbound," says Jorgensen.

In 2010, Genspace became a Biosafety Level One biotechnology laboratory, the first of its kind to be community owned, not associated with academia or industry. It now hosts daily workshops, catering for a varied mix of locals. About a third are artists, a third are IT programmers and the rest are just curious – what Jorgensen calls 'the Discovery Channel crowd'.

"Places like Genspace are especially suited to certain types of biotechnology," says Jorgensen. "Reverse-engineering lab equipment can make machines for labs that can't afford them, while techniques that use DNA and biomaterials are also interesting to the general public and in demand from artists."

For all the good intentions of people like Jorgensen, there is something undoubtedly disconcerting about genetic modification being conducted outside of a professional and regulated environment. Biosecurity experts note that while the majority of DIY biology remains unsophisticated, "some groups are beginning to conduct significantly more sophisticated experimentation" (Revill, 2013).

James Revill, research fellow at Sussex University's Science and Technology Policy Research group, says there is "little doubt that such groups could generate a crude biological weapon", such as an outbreak of food poisoning. Nevertheless, he considers the actual threat of DIY biologists to be minimal. "There may be some amateur biologists who are potentially reckless and dangerous, but I imagine the bulk just want to learn and have fun with science – without paying tuition fees."

According to Revill, the process of creating sophisticated bioweapons has historically eluded entire states, let alone unskilled and poorly funded amateurs. "There is a great deal of professional academic life science research that raises clear dual use concerns – for example, the H5N1 research or more recently the aerosolisation of Ebola," he says. "This sort of thing, while arguably justified by the value of the results, has much clearer dual use potential and poses more significant safety risks than the sorts of things I understand are being done in DIY bio groups."

For Jorgensen, the fact that Genspace doesn't have biohazard cabinets is enough to put most people off working with pathogens. However, she believes equipment is not the biggest barrier to developing anything sinister – it is time. "Biology is dependent on spending lots of hours in the lab and the life cycle of the organisms. It really takes more than most people are willing to put in if it is not their full-time job."

Amateurs may not be considered dangerous, then, but there will be increasing concerns about people modifying organisms outside of any formal ethical principles or regulations. Projects such as one that aims to create "a genetic hybrid of the human and the alga" indicates the fanciful ambition of certain amateurs, and projects to make plants glow in the dark could make the general public even more concerned about genetic technologies.

Phillip Bowen, a member of the London Hackspace, says there have been attempts to get the labs to comply with professional standards. "There are people who would like there to be more rules and regulations in order to secure grants and funding for community projects. Others are very resistant to that."

This divide in the DIY community could become more apparent as techniques become more sophisticated and those with a charitable and educational aim separate from hardcore biohackers looking to emulate advanced genetic engineering techniques.

Revill says some groups "have sought to put in place measures to ensure responsible research, such as safety standards and training. In this sense, the DIY bio community is perhaps no more or less dangerous than professional life scientists. It is just different."

For now, biologists like Jorgensen say biohacking is a force for good. "Wouldn't it be nice if people had a working knowledge of DNA like they do with electricity?" she says. "Maybe it would then diffuse some of the negative reaction people have about synthetic biology." DIY biologists are unlikely to be stopped from doing what they do anytime soon. The equipment, knowledge and materials are already out there, and the faster science progresses in professional labs, the greater the capacity amateurs will have. Perhaps the next great breakthrough in genetics will not come from a world-renowned research institution, but a community owned lab – or even a garden shed.

Faces in the code

As part of the 'Stranger Vision' project, artist Heather Dewey-Hagborg uses DNA from things she has found – hair, cigarette butts, nails, chewing gum – to create detailed renderings of what the sample's owner might look like. 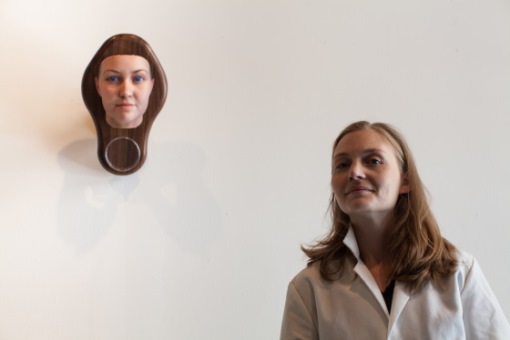 DNA is extracted from the sample and amplified using PCR (polymerase chain reaction) at the Genspace facility in Brooklyn, New York. The DNA is then sequenced and fed into a custom computer program written by the artist herself, which analyses the genes responsible for various physical traits (nose width, eye colour, ancestry, skin colour, hair and gender) and creates a 3D model of a face to represent whoever the sample comes from. Dewey-Hagborg then adds some finishing touches before printing it out on a 3D printer.

The sculptures are said to have a passing resemblance to the person sampled, but are not perfect, as the genetic basis for facial morphology remains poorly understood.

DIY Biology Around the World

There are at least 40 formal DIY biology groups globally, mostly in North America and Europe, but also in Tel Aviv, Singapore, Sydney and Auckland. There are other, more informal networks and groups that meet for social events.

Many DIY biology labs are in fact outreach projects associated with a university, such as Manchester's MadLab, which is supported by Manchester Metropolitan University and funded by the Wellcome Trust. Others receive funding to support bio-entrepreneurs and new biotech startups such as the Biotech and Beyond group in Carlsbad, San Diego.

HiveBio in Seattle, Washington, not only provides space and equipment for its members, but wants to provide information and support towards publication in recognised journals.

Companies such as the Boston-based Ginko Bioworks are developing off-the-shelf kits to help people create novel genetically modified organisms without the need for professional laboratories. In the UK, the Darwin Toolbox is an 'affordable biotechnology laboratory' within a toolbox-size container and includes a centrifuge, a PCR machine and a gel electrophoresis unit with transilluminator.

DIYbio.org founder Jason Bobe was behind a project in 2008 to map the various types of microorganism found on pedestrian crossing buttons in different cities, using thousands of citizen scientists.

DNA barcoding is one of the most popular DIY biology classes, helping to identify local species, but more recently helping to find out what meat is in supermarket food following the horse meat scandal in the UK.

Tom Ireland MSB is managing editor at the Society of Biology and a freelance journalist.