Cannabis has a damaging effect on mental health when used long term, but one of its compounds is showing promise in the treatment of schizophrenia, reports Dr David Potter

The infamous propaganda film Reefer Madness, released in 1936, showed young students trying cannabis and promptly descending into madness. Seventy years later, an increasing number of scientific studies indeed link cannabis use to psychiatric disorders, especially in the young[1]. In its World Drug Report, the United Nations Office on Drugs and Crime emphasised the global nature of this problem in a detailed chapter 'Cannabis: why we should care'[2].

The finger of blame pointed to increasing potency of black market material. In contrast to the cannabis of 1936, modern cannabis typically contains much more of the plant's psychoactive compound tetrahydrocannabinol (THC), but it also has reduced levels of a non-psychoactive, anti-psychotic ingredient, cannabidiol (CBD). The latter is now showing therapeutic potential for the treatment of several serious illnesses. CBD, purified from specially bred cannabis plants, is entering clinical trials as a potential treatment for schizophrenia.

Much of CBD's disappearance from illicit cannabis is due to a dramatic recent upsurge in the popularity of potent, locally grown herbal cannabis (often called skunk), at the expense of imported resin (hash). Until 2000, illicit resin accounted for about 70% of seized UK cannabis. By 2008, this fell to 15%. Skunk and resin are typically produced from a differing balance of cannabis chemotypes – that is, chemically different genotypes.

Two allelic genes are thought to control the biosynthesis of both THC and CBD. Because these genes are co-dominant, their chemical traits do not adhere to Mendelian Laws of inheritance (segregating in a classic 3:1 ratio). Instead, homozygous progeny are either THC-dominant or CBD-dominant, while heterozygous progeny more evenly produce both molecules[3].

Today, as in the past, much of the resin in circulation contains THC and CBD from mixed populations of the homozygous and heterozygous genotypes. But herbal forms of cannabis are grown from seeds repeatedly selected from the most psychoactive plants – as a result the gene that instructs CBD synthesis has been selected against. Consequently, when herbal samples were analysed in UK potency studies in 2004-5 and 2008, CBD was only present in minimal amounts, if detectable at all[4].

Seeds capable of producing CBD-rich plants are difficult to find. When seeds of 52 commercially available varieties were planted, 97% of seedlings proved THC dominant, the remainder having a mixed THC/CBD profile[5]. Until the 1980s, almost all herbal cannabis used in Northern Europe was imported from Africa, Asia and the Caribbean. Enthusiasts grew cannabis from the seeds it contained, but the plants performed poorly in their new home. At harvest, these contained 1-8% THC[6].

Breeding of more potent plants was attempted in the Netherlands in the early 1980s. The resultant plants were low yielding and of unpleasant taste[7]. In 1984, however, European cannabis breeding was revolutionised with the arrival in Amsterdam of new genotypes from the US. The most influential was named Skunk #1[8], allegedly due to its pungent odour. This indoor variety was twice as potent as the local opposition. Skunk #1 seeds were mass produced and widely distributed. In 1985, a year after its arrival, the first shop was established in Amsterdam supplying indoor cannabis growing equipment, and a now common retail activity had begun[9]. In the UK, skunk is now a generic term for any intensively grown female cannabis.

Assisted by Netherlands and UK authorities in 2001, plants with the original skunk genetics and other influential 1984 California escapees were relocated from a closing licensed seed bank to the GW Pharmaceuticals UK plant library. Genetics with important social history were therefore preserved. Low yielding by modern standards, this Skunk #1 material produces about 15% THC at harvest. That figure is on a par with average illicit material circulating now.

However, newly bred plants in the GW Pharma library, containing 15% CBD and minimal THC, and of profound pharmaceutical potential, could become the next plants of historic significance. 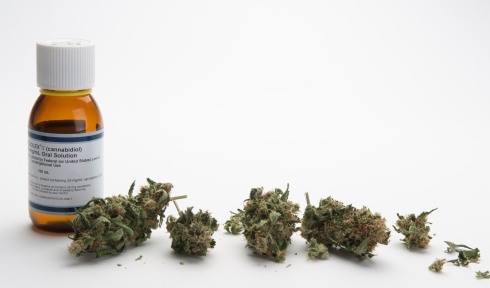 Within animal tissue, the so-called phytocannabinoids THC and CBD interact to different degrees with the endocannabinoid system (ECS), a group of neuromodulating chemicals and receptors in the brain that are involved in a variety of brain functions including appetite, pain sensation, mood and memory.

This system features two cannabinoid receptors – CB1 and CB2 – to which a number of endogenous substances (endocannabinoids) can bind, altering their shape and stimulating a range of emotional and behavioural responses. Although totally different in structure to endogenous compounds, cannabis derived substances such as CBD and THC can also bind with the receptors.

The CB1 receptors are primarily associated with central nervous system tissue, and CB2 receptors with the immune system. On binding to the cannabinoid receptors, both phyto- and endocannabinoids inhibit the release of the neurotransmitters glutamate and γ-aminobutyric acid. Over the past decade, research has shown that the activity of the ECS in the central nervous system is essential for normal mental health and its disturbance is increasingly linked with psychiatric disorders. At the same time, the main psychoactive agent, THC, has been dose-dependently associated with psychiatric symptoms.

CBD is not a CB1 receptor agonist, and it differs from THC in other ways as well. Functional magnetic resonance imaging has shown that THC and CBD have contrasting and usually opposing effects on brain function[12].

Forms of cannabis with high THC content and minimal CBD have been observed to instigate increased frequency of acute psychotic episodes in patients. However, the presence of CBD in street cannabis has been shown to protect users against psychotic symptoms[10]. CBD has been shown in animal models and limited human studies to have antipsychotic properties by an as yet unknown mechanism.

The same molecule also had anti-anxiety effects, demonstrated by reducing anxiety in a simulated public speaking test. The differing effects of THC and CBD on emotional processing were also shown by recording responses to fearful faces[12].

Imbalances in the endocannabinoid system have been linked to schizophrenia, and post-mortem studies have identified an increased number of CB1 receptors in the dorsolateral prefrontal cortex of people with schizophrenia. There is a great deal of unmet clinical need in schizophrenia, and all the current antipsychotics rely primarily on the action of dopamine.

As well as its antipsychotic properties, evidence is emerging to suggest CBD could improve other key symptoms, including cognitive deficits, metabolic disturbances and the chronic systemic inflammation often associated with people with schizophrenia[11]. Trials underway at GW Pharmaceuticals are evaluating CBD, along with other phytocannabinoids, as a treatment for people with this condition. With at least 0.5% of the population (35 million people) throughout the world having the condition, a large number are eagerly awaiting the results of the trial.

6. House of Lords Select Committee on Science and Technology. Cannabis: the scientific and medical evidence, HL Paper 151-I (The Stationery Office, London, 1998).

8. United Nations Office on Drugs and Crime. Review of the world cannabis situation. Bulletin on Narcotics, Vol LVIII No 1 and 2 (2006). www.unodc.org/documents/data-and-analysis/bulletin/2006/Bulletin_on_Narcotics_2006_En.pdf

Dr David Potter CBiol FSB FLS is director of botanical research and cultivation at GW Pharmaceuticals, having joined as its first employee in 1998. He completed a PhD at King's College London on the pharmacognosy of Cannabis sativa, and has 23 years' research experience as a horticulturalist and agronomist. David advises the police on cannabis use and acts as an expert witness in court.