Nature photographer and writer Rupert Soskin introduces an exclusive extract from Metamorphosis, his forthcoming book on how insects transform themselves

We all grow up knowing that very hungry caterpillars miraculously become delicately winged manifestations of beauty and that maggots somehow transform themselves into creatures that do unspeakable things to our food. This alchemy, however, seems so normal to us that most people don't give it another thought.

It was only about seven years ago that the true, breathtaking complexity of metamorphosis took me by the shoulders and began to shake me into some kind of clumsy realisation. I found a caterpillar that I did not recognise. Its green, yellow, orange, black and white uniform was not within my reference library, and neither could I identify it after days of trawling the internet. I sent photographs to naturalist friends, none of whom was any the wiser. The photographs had to live in my 'unidentified' folder, which is obviously completely useless.

It was some months before I came across the extraordinary resource at www.ukleps.org. Within those pages I found my caterpillar. It was a final instar sword-grass moth (Xylena exsoleta), the only brief period in its entire life cycle when it bears orange spots.

A week or so earlier I would have been looking for a different creature. Why? What possible evolutionary advantage could there be in these seemingly superficial costume changes? I began to look at larvae and nymphs with new eyes. Despite my lifelong fascination with invertebrates, I had been utterly ignorant of the most fundamental aspect of their lives: change.

In nature photography, without the patience of gods, you are doomed to frustration and frequent failure. But in the creation of Metamorphosis: Astonishing Insect Transformations, even my Zen-like patience would be tested to the limit. For the sequence on antlions, pit-dwelling nightmarish creatures, I wanted to photograph the moment that a subterranean demon-like larva emerges from the soil as a filigree-winged nocturnal beauty, a summer night event that is over in seconds.

Suffice to say I didn't go to bed for five weeks at one stage in 2012, and did the same for four weeks in 2013. No automatic techno-gear can guarantee critical focus at such tiny scales, so the only option was to watch, in an almost meditative state, for the fleeting movement of grains of soil. Most emerged in my brief sprints to the toilet, or on one occasion when I looked up to check the battery. It was as if they were taunting me in shabby gratitude for having fed them throughout their two year life cycle.

In the end, the book was a three year voyage of discovery, with the surface of insect life barely scratched. There is still so much to learn.

Rupert Soskin is a photographer, writer, presenter, naturalist and explorer. His first love is the natural world, from archaeology to evolutionary psychology. He wrote and presented Standing with Stones, a DVD on megalithic monuments.

Extract from Metamorphosis: "There are two distinct types of metamorphosis: hemimetabolous (incomplete metamorphosis) and holometabolous (complete metamorphosis).
Hemimetabolous insects such as crickets, mantids and bugs resemble the adult form throughout their lives. In these species the young are called nymphs and each moult brings them closer to their adult morphology. Conversely, the young of holometabolous insects, called larvae, look nothing like their adult form. These insects, which include butterflies, ants, beetles and flies, often resemble little more than hungry bags, but transform into a breathtaking variety of body shapes and colours.
Prior to adulthood, each stage of development is called an instar, a newly hatched larva or nymph being its first. The first moult reveals the second instar and so on. In hemimetabolous insects, the final instar moults into the adult form. In holometabolous insects, the transition from larva to adult takes place in an intermediate stage called a pupa. Most species moult a handful of times before reaching adulthood, but the number of instars varies greatly between orders and species. Certain mayflies, for example, may moult more than 30 times, while primitive insects such as springtails continue to moult throughout their lives.
Orthoptera, the grasshoppers and crickets, are fairly average in having five instars. The moults of a single South American horsehead grasshopper show the growth over approximately a 12 week period. Each stage lasts approximately three weeks so if the line were extended in both directions, the 18 week development would include a 10mm long egg and a 16cm long adult female, over half as long again as her fifth instar moult.
Common to all insects is the exoskeleton, a waterproof, protective outer wall, inside which the organs and soft tissues of the body are supported. However, the specific characteristics of this outer shell differ widely. The fact that we call it an exoskeleton is, in itself, potentially misleading. Like the vertebrate skeleton, it is a supporting structure. However, it may or may not be completely rigid, thick or thin, and in some cases is incredibly delicate indeed.
For many larvae, particularly among holometabolous insects, the cuticle appears to be little more than a constraining bag that splits and falls away as it is outgrown by each successive instar. In the sawfly family, for example, along with the majority of holometabolous larvae, this protective layer is a thin skin that can be shed relatively easily – an important factor, as any insect is at its most vulnerable during these periods of change. 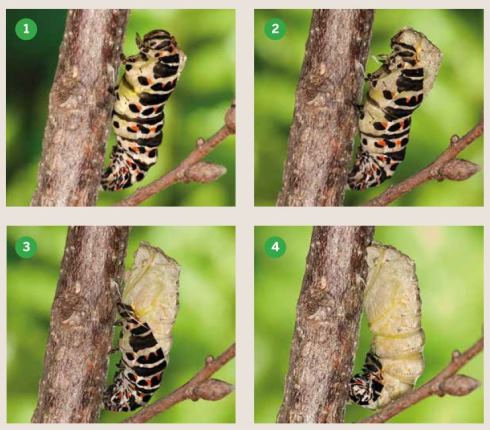 Above: When the chrysalis has formed and attached to its branch, the last larval skin of the European swallowtail is shed in minutes. As the skin is shed, adult features are visible on the newly revealed chrysalis.
Despite this vulnerability, for some insects, moulting can be a long, drawn out affair and none more so than the aquatic juveniles of biting midges (Ceratopogonidae). The larvae of these insects are highly active, sometimes seen as a tangled mass of individuals trying to exploit the same food source.
They are consummate opportunists, grazing on algae or swooping in to feed on another larva's moult the very instant it has been shed.
It is not, however, the free swimming larvae that face the greatest perils. It is their transition into the non-feeding pupae that is so fraught with danger. Exposed and helpless at the water surface, the larva's moult into pupal stage is dangerously slow. One individual took almost a full day to shed its last larval skin, leaving it at the mercy of any number of potential predators.
Even when the moult is complete, the pupa remains virtually immobile, able only to move its tail rather feebly from side to side, so slowly that it barely seems deliberate. When sensing danger, it can do no more than sink slowly out of harm's way and, if it is lucky, the threat will have passed by the time it needs to return to the surface for air.
Fortunately, this precarious phase is quite short and less than a week later the adult will climb out of the pupal skin onto the water's surface. The unrelenting numbers game aspect of insect life is harshly illustrated by these semi-aquatic life cycles. If, through no more than bad luck, they pupate in windy weather, a gust may flatten their fragile drying bodies to the water surface. Once the water's surface tension is broken, they will be lucky to drag themselves free.
Just as with us, the growth and development of insects is a complex, hormone-driven sequence of intricately balanced events. Nestling beside the insect brain are a pair of glands, the corpora allata, which, together with specialised cells within the brain itself, form the drivers for the metamorphic process. The glands secrete a juvenile hormone that suppresses the development of adult features, thereby constraining the larva or nymph to the purpose of growth. In the final instar, the corpora allata shrink away and hormone production is taken over by the specialist brain cells that secrete none of the adult inhibiting chemistry. This hormonal shift allows the formation of the mature insect's characteristics such as reproductive organs and fully developed wings.
Back in the 1930s, Vincent Wigglesworth, the foremost pioneer in our understanding of insect physiology, began performing experiments that revealed that if the brain or glands of different instars were removed and placed into others, specific development could be induced. Altering the hormone balance of an early larva to that of its final instar would result in a tiny adult at the next moult. Conversely, if a final instar's chemistry was forced to remain juvenile, instead of an adult being produced from the next moult, an even larger larva or nymph would appear.
In a photograph of two caterpillars of Attacus atlas, the giant Atlas moth from Southeast Asia, at first glance they appear to be at different stages of development, but, actually, both individuals hatched on the same day from eggs laid by the same female. Both are in their final instar, the only difference being a hormonal imbalance preventing one from growing. Only the larger one has gained enough fat reserves to survive the four-week period pupating inside a cocoon. Perhaps more surprising is that long after its giant sibling has drifted into silk-bound slumbers, our tiny runt just continues eating. Weeks pass, gradually feeding slows and eventually stops. Finally, it dies – in this case, at around the same time as the healthy sibling emerges from its cocoon in full winged splendour.
The insect world is filled with surprises, many beautiful, others horrific. Either way, a closer look can only increase immeasurably our sense of wonder at the extraordinary intricacies of their lives." 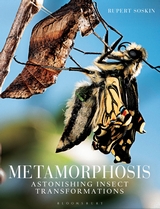 Adapted from the book Metamorphosis: Astonishing Insect Transformations written and photographed by Rupert Soskin, with permission of the author and publisher, Bloomsbury.