Shaun D Pattinson and Vanessa Kind say the term ‘somatic cell nuclear transfer’ has led to widespread misunderstanding of how cloning works. Is it time to change it?

Few scientific developments are truly revolutionary, but the birth of Dolly – the most famous sheep in history – is probably an exception.

Dolly was a clone, meaning that she was (almost) genetically identical to another sheep. Occasionally embryos split into two, producing identical (monozygotic) twins, or naturally occurring clones. What made Dolly special was that she formed from an egg joining with a body (somatic) cell, rather than a sperm (germline) cell.

However, despite Dolly’s fame and the familiarity of this technique – this year used to clone monkeys for the first time[1] – there is widespread misunderstanding of how this type of cloning is actually achieved.

The method is usually referred to as ‘somatic cell nuclear transfer’, a label that suggests it involves transfer of an isolated nucleus from a somatic cell into the enucleated egg. We note that learning materials provided to GCSE, AS level and A2 level biology students adopt exactly this misdescription[2]. Indeed we, the authors, held the same misunderstanding until, as part of a project using law to engage 16- to 17-year-old students with science, we were corrected by Mary Herbert, professor of reproductive biology at Newcastle University.

The Nature paper announcing Dolly to the world, in fact, states the procedure involves “fusion of the donor cell to the enucleated oocyte”[3]. In other words, the entire somatic cell is fused with a nucleus-free (enucleated) egg, not just the isolated nucleus. Chemical signals are then used to trigger embryonic development.

The technique might more accurately be described as ‘somatic cell transfer’, ‘somatic cell nuclear replacement’, or even something else entirely, rather than ‘somatic cell nuclear transfer’. The current terminology leads to confusion with techniques used in earlier experiments, such as John Gurdon’s Nobel Prize-winning work on tadpoles in the 1960s[4], which did involve the transfer of the isolated nucleus from frog intestinal epithelium into eggs using a micropipette.

Since Dolly’s birth, 23 species of mammal have been cloned using the same technique, including cats, dogs, rats and cattle. Monkeys proved to be more difficult, but in January this year, Chinese scientists announced they had used the technique to clone macaque monkeys[1]. New Scientist's report on the research declared “the technique that gave us Dolly the sheep… involves removing the nucleus from a donor egg cell and replacing it with one taken out of a cell from another animal”[5]. supported by a graphic showing just that. Yet again, the original paper in Cells actually refers to “fusion of the fetal monkey fibroblast with the enucleated oocyte”[1].

If New Scientist can make this error, the label ‘somatic cell nuclear transfer’ must be revisited, because this is misleading scientists and the wider public. 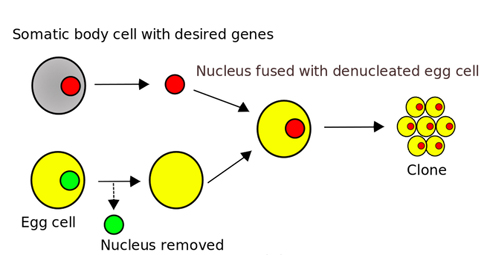 A typical example of an incorrect somatic cell nuclear transfer diagram, showing an isolated nucleus being transferred. This diagram is widely available on Wikipedia. Correct figures should show the donor egg being fused with the enucleated egg.

Why does this matter? First, the actual method suggests the resulting cloned embryo will have mitochondria from both the egg provider and the somatic cell provider, which has sometimes been borne out in practice [6,7]. Mitochondrial defects from either source could thereby be passed on, including those from the donor of the somatic cell, even if that person is male and would therefore not be able to pass on mitochondria by standard fertilisation.

Second, there is the question of correctness in our teaching materials. Have students at GCSE, AS or A2 level been penalised in an examination for describing the method correctly?

Third, ethical and regulatory policy decisions sometimes turn on narrow issues and the wording in legislation has to be clear. The legislative ban at the time had assumed that human cloning would take place by replacing the nucleus of an embryo with another nucleus[8,2]. Dolly was not created in that way. Few would deny that every effort should be made to ensure that science is communicated accurately.

In this case, public understanding of cloning has not been assisted by the label ‘somatic cell nuclear transfer’.