The Choanoflagellates: Evolution, Biology and Ecology 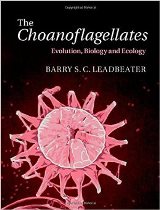 This book is a beautiful, current compendium on choanoflagellates, the sister group to the Metazoa. The majority of these tiny creatures inherit their skeleton from their mother cell. Rib-like 'costae' aggregate into a shell-like protective outer covering called a 'lorica', a complex procedure that takes only a matter of minutes after cell division. They then spend the long interphase synthesising and storing the costae for their progeny.

Much of the book is about this lorica business, but there are useful chapters on their ecology, where we learn that they contribute up to 20% of heterotrophic nanoflagellates in marine, brackish and fresh water, and outperform others in eating bacteria; their biochemistry, particularly those enzymic reactions that are like/unlike animals; and particularly their phyletic relationships.

There are many DNA sequence stories, and the author is very sensible about the issues, noting how many genes there are in common – and different – among the various organisms, maintaining the association between choanoflagellates and animals.

I'll confess here that Leadbeater was an old associate of mine. However, this really is a super book, with beautiful pictures (even though that often means captions over the page), and a very nice layout. What a pity it'll only be read by about 100 people. There'll be a lot of copies in libraries, though.