The Man in the Monkeynut Coat 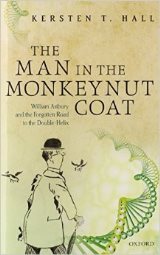 This is essentially a sympathetic biography of William Astbury, with a lot of wise comments on the incidents and the accidents of his life. The problem was that he was in Leeds, far from the action occuring in Cambridge and London at the time. He had set up a department that he wanted to be called 'molecular biology', a term he invented. Funded by the Worshipful Company of Clothworkers, he used X-ray crystallography photos to demonstrate, initially, that the keratin of hair – wool – was a long, stretchable molecule and became committed to the idea that all of biology was 'worked' by the change of shape of protein molecules.

Hall shows how this physics oriented approach led Astbury away from the DNA story, but in my opinion he spends too much of the book on analysis of the DNA/Franklin history.

From the Braggs (father William Henry and his son, William Lawrence), through a variety of characters, including Kathleen Lonsdale (née Yardley, the first female Fellow of the Royal Society), Linus Pauling and Alfred Mirsky, to Oswald Avery, Astbury was on the edge of the burgeoning biophysics, but after his failure to get MRC funding at Leeds, he lost heart.

This is an excellent, stylish historical account of the early days of biophysics. Yet I didn't like the cover cartoon, nor the title. To end, a nice quote from Astbury: "... the important thing is not to grow up".