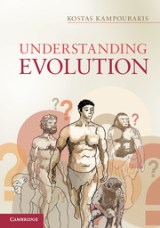 This intriguing book seeks to explore why evolutionary theory is so difficult for some people to accept. Kampourakis draws on Dobzhansky (1973) by quoting that "without evolution, biology is a pile of sundry facts that make no meaningful picture as a whole".

He sets out to conquer the perceived lack of understanding of evolutionary biology, which had allowed creationism and intelligent design to take hold in many parts of the world and in many societies. He maintains this is due to the inherent counter-intuitiveness of the theory.

Although predominantly for graduates and undergraduates, the book has clear explanations, is well illustrated and would be accessible to any scientifically literate person.

Kampourakis tackles the relationship between world religions and evolution head on, drawing on evolutionary biologists from both sides (and on the fence) in the argument, including Richard Dawkins, Steven Jay Gould and Simon Conway Morris.

Understanding Evolution isn't another 'evolution book' in the long tradition, as it comes at the discussion from another viewpoint, tackling the causes of misunderstanding instead.