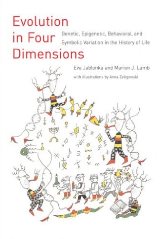 This could be an unsettling read. In essence, the authors consider that the modern synthesis theory of evolution and genetics is too narrow a concept, perhaps even simplistic. They portray the linear central dogma as more of a network and strongly criticise the concept of the gene as the basic replicator. In particular, Richard Dawkins' selfish gene idea is largely dismissed, as are his 'memes'.

This view relates to interactions of genes with other dimensions of inheritance, and the role of epigenetics has a major section. This is technically dense, but basically digestible; the remaining two sections are more difficult.

On behaviour, there seem to be two main threads: that behaviours in animals are subject to a selection mechanism, and are stably inherited; and that there is feedback between acquired behaviours and genetic (and epigenetic) programming. The latter is obviously controversial and smacks of Lamarckism, which the authors are happy to admit.

The final section only applies to humans, as no other animals use symbols to communicate. There is considerable material on linguistics, which has been studied using research tools similar to those of population genetics.

The text becomes more speculative as the chapters progress. While well referenced cogent arguments are given for the web of interactions between all four evolutionary dimensions, I was not fully convinced.

The writing style is highly engaging, but end notes are used to excess. It is very disruptive to have to keep flicking back and forth to read them. The illustrations are charming, but a few are purely decorative and add nothing to understanding.
Evolution in Four Dimensions is an important book, now in a revised second edition. It should certainly be read by geneticists and evolutionary biologists, and will be of interest to general readers who desire an insight into some of the most controversial subjects in the life sciences.