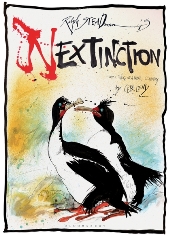 The self-styled 'gonzo-conservationists' are back with a fresh take on the avian extinction debate, following the remarkable success of their previous collaboration Extinct Boids (2012). The two friends – cartoonist and caricaturist Steadman and writer and filmmaker Levy – offer a quirky and lavish visual take on bird species currently teetering on the edge of global extinction, listed as critically endangered by BirdLife International for the IUCN Red List.

As ever, Steadman can't resist adding a few of his own mythical creations. However, there is a serious nature to this work, as it carries the looming extinction crisis to a wider environmentally conscious public, beyond the world of hard scientists and conservation policymakers, who sometimes struggle to communicate widely.

Some reviewers might baulk at the book's irreverence and immaturity but, although it does detract and distract after a while, the simplicity of the medium is powerful. The writing lacks some rich historical contextual observations in the individual species' tales (for that is what they are, stories about nature and people over time), which would have given the text a more robust feel. The incorporation of emails/phone calls/diary entries as a sideshow is a touch lazy and self-indulgent, but at the same time immediate, fresh and engaging. It also documents and illuminates the creators' journeys. This is a book to dip into regularly to feel both sadness and hope.