Interdependence: Biology and Beyond 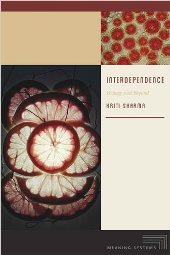 It is a rare treat to indulge in reading a work that switches between philosophical reasoning and empirical biology with eloquent mastery. This is just what Sharma does, illuminating the concept of interdependence from its everyday usage to focus in on the micro-scale network of processes that are contingent on interactions of organisms with one another and their environments.

Sharma refers to familiar biological processes and relationships to illustrate that contingentism is a useful philosophical approach that underpins not only ecological, regulatory (for example, enzyme production, action and inhibition) and hierarchical (such as the roles of cells, tissues and organs with systems) interdependences, but further explores ontological interdependence – the view that 'things only exist as things dependent upon other things'.

Sharma urges the reader to continually take interdependence as more than an everyday truism or the term 'it's all connected', and to view interactions with a sense of wonder at their specific functionality, elegant simplicity and awe inspiring diversity.

Contingentists are unlike either dualists, who may elevate the mysterious to the kingdom of the eternally inexplicably sacred, or physicalist monists, who assert that everything, however complex, is ultimately explainable in terms of physical laws.

Neither is contingentism merely idealism, which argues that all phenomena arise from thoughts, awareness or consciousness.

The argument for contingentism is that in trying to explain the ultimate existence of things, we do not have to either determine them as something to be conquered or sacrosanct; we may not be able to explain their existence, yet we can describe the relationships between phenomena.

Interdependence: Biology and Beyond can't exactly be described as light reading, yet the chapter summaries and examples drawn from the familiar world of biology make this book accessible to most graduate level readers.

For the less experienced philosophical thinker, this volume succinctly summarises alternative viewpoints with clarity – indeed, skim reading parts of the fourth and fifth chapters after the introduction may assist this reader with identifying the elements of contrasting or competing theories.

I feel much more at ease within the realm of biology and, although I like the challenge of stepping outside my comfort zone, I would describe my full appreciation of matters philosophical possibly in a dualistic sense: my understanding appears to tend towards an unfathomable, potentially 'holy' asymptote.

As such, I fully appreciate how relatively painlessly Kriti Sharma has enabled me to narrow the gap.