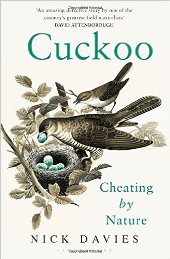 If ever there was a text to inspire a prospective field biologist, then this is it. Nick Davies has produced an utterly absorbing account of his research over the past 30 years into the life of the cuckoo and its hosts.

The cuckoo is the only obligate brood parasite among UK birds. Davies unravels the processes involved in the 'arms race' between the cuckoo and its host, demonstrating with impressive clarity how natural selection has helped mould both physiology and behaviour. It is a gripping detective story, told superbly well, detailing how questions were asked, clues unfolded and conclusions reached, and exploring how the female cuckoo is able to mimic the specific song patterns, plumage, behaviour and egg colouration of her hosts.

Personal accounts from Davies – of nest hunting forays, the imaginative use of fake eggs to test hypotheses and detailed descriptions of the various habitats involved – combine well to lead the reader through the thought processes of an excellent field biologist.

The story is interspersed with literary and historical references to cuckoos, which add a broader dimension to the scientific investigations. The delightful watercolour illustrations by James McCallum complement the text extremely well and the photographs are excellent.

This is an easy book to read and will inform and enthral both the experienced ornithologist and those with a casual interest in natural history. While much is known about this particular host-parasite relationship, not all questions have been answered, leaving scope for the next generation of field biologists to investigate another chapter in the story.