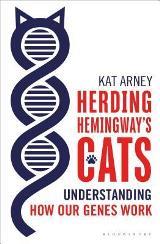 Kat Arney sets out to understand how our genes work and, as her book title suggests, this is not going to be an easy task. She takes us on a journey, quite literally, as she flits across the world to meet a variety of geneticists, from those at the heart of the major genetic discoveries of the last century to those at the cutting edge of genetics today.

In her search for answers, we are introduced to a number of eminent and eccentric researchers, and we soon learn that even the experts are often in the dark as to what lies behind some of their own discoveries. There is the research suggesting that RNA might affect genetic inheritance more so than previous epigenetic theories account for; and where we used to think that sequencing the human genome would reveal some indisputable truths about which genes might be responsible for which diseases, scientists now know that we still have much more to learn, and that nothing is as clear cut as we'd once hoped.

Arney freely admits that there is no neat conclusion to this book, and because she writes with such wit and healthy cynicism, it does not matter. Reading the book feels a little like trying to catch the soap in the bath – but this is her point, and her breezy style and open-minded approach ensures that we stay with her to the end, no matter how slippery things get.