Sex, Drugs and Rock’n’Roll: The Science of Hedonism 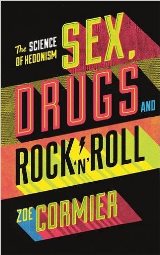 Sex, Drugs and Rock'n'Roll is a raucous ode to base pursuits by Zoe Cormier, who is one of the co-founders of the events and installation organiser Guerilla Science.

Written with great warmth and humour, Cormier's key insight is that it is often because of joyous excess, rather than in spite of it, that discoveries are made.
Her examples range from the prosaic, such as the continued influence of drugs on the music industry, to more interesting cases of acid-tripping geneticists seeing new ways of mapping genomes, psychiatrists getting high to understand their patients better, and Easter Islanders' natural rhythm providing a new theory for just how they moved those stones. The breadth and erudition of her case studies is as impressive as it is entertaining.

Those readers wishing for more of a historically minded discussion of the moral elements at play here – shame, panic and outrage being the chorus that inevitably greets the subject matter – will be disappointed, as Cormier only touches on them incidentally. This is an unfortunate oversight, given the resurgence of certain repugnant strains of restrictive moral policing worldwide, but for the most part you're having enough fun to forgive her.

Furthermore, at its best, away from the bizarre experiments, funny anecdotes and illuminating historical portraits, Sex, Drugs and Rock'n'Roll does touch on something deeper about the biological relationship between humanity, sex, drugs and music.

In the final section, in which Cormier outlines why it is possibly the last of this 'unholy' trinity that most sets humans apart, some of her prose – passionate and personal – is reminiscent of Oliver Sacks' transplendent psychoauditory exploration Musicophilia, and a higher compliment I cannot give.