Gene Jockeys: Life Science and the Rise of Biotech Enterprise 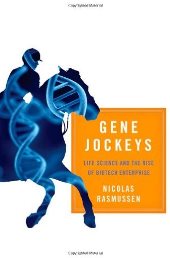 Gene Jockeys explores the first medical biotechnology success stories, giving an insight into the people, techniques and politics that made them possible. It describes the biotech projects that led to five of the initial recombinant DNA drugs to gain medical approval in the US, drugs that continue to produce huge wealth for the biotechnology industry.

The tremendous progress made in molecular biology during the 20th century meant that when the science met the business world in the 1970s and 1980s, the biotech industry could take off. Techniques such as gel electrophoresis allowed rapid progress, and the political climate following World War II was conducive to research. Cold War ideologies in the US led to generous funding: science was seen as an example of free thought, which only the 'Free World' could offer.

The book is a very thorough study of the scientific and commercial journeys of these drugs, giving details about the science and the people behind them. Nicolas Rasmussen explores the attitudes of the time, many of which will be familiar today.

The scientists' self-promotion made promises about what biotech could offer medicine, while at the same time they warned of dangers of their techniques being misused. It is not surprising that the fear remained that governments could be attracted to the possibility of genetically engineering humans.

The level of detail provided in the book means this is not a casual read, but anyone interested in the history of modern biotech and the attitudes that shaped it will find valuable insights.