Life’s Greatest Secret: The race to crack the genetic code 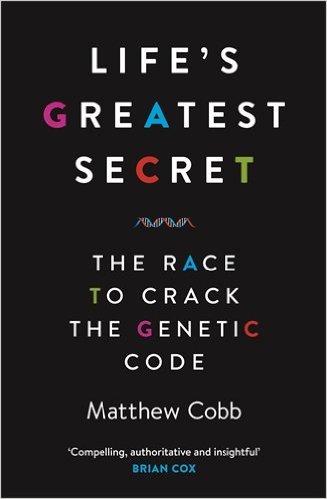 This book is a thrilling read. After the elucidation of the structure of DNA, the unravelling of the genetic code – which allows DNA to direct protein synthesis – was one of the great achievements of 20th century biological science.

Cobb sets the topic in context by discussing the history of genetics and information science, and takes the reader through the DNA story, with its familiar names.

It was Francis Crick who first recognised that the sequence of bases in DNA determined the sequence of amino acids in proteins, but it was other scientists, whose names are undeservedly less familiar, including Marshall Nirenberg, Har Gobind Khorana and Severo Ochoa, who determined the nature and basis of the code, and, like Wilkins, Crick and Watson, won Nobel Prizes.

It was indeed a race, which at times left this reader metaphorically breathless. There is a lap of honour, too: Cobb brings the story up to date with an account of more recent developments in the field, and looks forward, pointing out that there is still much to learn – in particular, how proteins are organised to form living organisms.