The Tears of Re: Beekeeping in Ancient Egypt 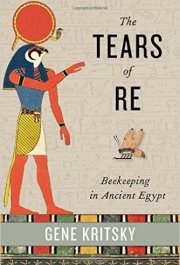 In Egyptian mythology, it was believed that "when the god Re cried, his tears turned into bees upon touching the ground". Little did I know before reading The Tears of Re how important bees were to ancient Egyptian mythology, medicine, art and food.

The book begins with the earliest record of beekeeping, a relief dating from the reign of pharaoh Newoserre Any (c.2474–2444 BCE). The beekeeping relief found in the pharaoh's solar temple depicts men attending to beehives, collecting and storing the resultant honey.

The book progresses through Egyptian history with further evidence of beekeeping and the uses of its products in many different aspects of Egyptian life: eating, painting, dentistry, boat making and contraception to name but a few.

Concluding in modern day Egypt, it is amazing how similar the ancient hives depicted in the reliefs are to traditional beekeepers' contemporary mud hives. However, modern box hives have largely replaced these traditional methods, even though they are particularly vulnerable to mites, resulting in the increased use of pesticides. This leads us to think that ancient Egyptians can teach us a thing or two about apiculture.

Reading this book, I felt like an Egyptologist. Both the photographs and line drawings of reliefs and hieroglyphics support the text well. I found the book an engaging and enjoyable read and would encourage anyone who has an interest in bees, beekeeping or ancient Egypt to read it.