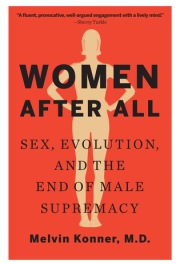 In the 16th century, the fabulously named Heinrich Cornelius Agrippa wrote a short, obtuse pamphlet entitled Declamation on the Nobility and Preeminence of the Female Sex. In this, he outlined in various outrageous ways the natural superiority of womankind.

Girls have fewer teeth, he said, because they are not as gluttonous or aggressive as men. They do not bald or sprout ugly hairs sprout on their face, and they are even spared humiliation in drowning by floating face down, unlike their unfortunate male counterparts.

Agrippa was no protofeminist, and these musings were probably no more than a scholarly joke, but in Melvin Konner he finds a 21st-century ally to the cause of biologically determined female supremacy.
Throughout the book, a wobbly mass of evidence is assembled to support the claim that biology can explain the recent upturn in female fortunes and convince us that future success will be based on similarly natural lines.

We are taken through a variety of animal mating arrangements with detours through hunter-gatherer societies and past his own anthropological work, which highlights the diversity between human communities. Indeed, this book convincingly shows that there is truth to the hypothesis that some differences between the sexes result from deep evolutionary processes rather than social conditioning. The only problem is that isn't what Konner is supposedly arguing for.

Although the words 'inevitable' and 'unstoppable' are thrown around throughout, the inferences made are loose and inconsistent. Allowing for striking and consistent male and female traits that hold well across a range of circumstances is one thing, but saying that these explain and predict the growing socioeconomic presence of women is quite another.

At the very least, it is a vast oversimplification. At worst, and this is the territory into which this book strays, it is a dangerously ignorant and complacent view that ignores the tooth-and-claw struggle of people fighting structural and cultural sexism every day, and to whom some future woman-world is not remotely inexorable, but rather a goal that can only be achieved through action on a level far removed from biology.