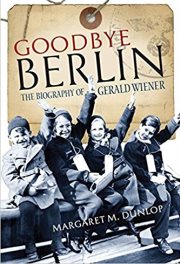 This enjoyable biography of a highly celebrated scientist should come with a disclaimer, being penned as it is by his wife.

However, that is to miss the point of an engagingly human story that is very much worth telling: that of a 12-year-old single child of a Jewish couple in Berlin, who, to avoid persecution, was evacuated unaccompanied to the UK prior to the outbreak of war in 1939.

The shy yet resilient boy met the challenge of becoming a refugee by dropping the German first name of Horst in favour of his middle name, Gerald. Wiener flourished academically through a mix of endeavour, intelligence, inquisitiveness and opportunity, eventually becoming a professor of animal genetics and head of department at the University of Edinburgh. There, he forged a distinguished career in research and was a key contributor to the research that led to Dolly the sheep, the first mammal cloned from an adult cell.

Wiener is also in global demand for his expertise in agricultural genetics, having been invited to visit many developing countries, including India, China and North Korea to improve crop plant yields. These trips provide fascinating social insights.

While working in the US, Wiener uncovered his father's extended family and learned of their escape from Nazism, which Dunlop relates with flair. This is a heart-warming tale of triumph over adversity.