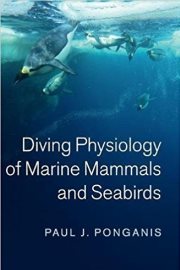 Students, researchers and anyone else interested in diving physiology may need to find more space on their bookshelves, as two splendid new books have been published recently: Marine Mammal Physiology: Requisites for Ocean Living (edited by Castellini & Mellish, CRC Press) and Diving Physiology of Marine Mammals and Seabirds, which goes further and includes diving birds, and is reviewed here.

As a research marine biologist and marine physiologist at the Scripps Institution of Oceanography, University of California, Paul Ponganis is well placed to write an authoritative text, which is exactly what he has done. Seventy-five years of research are covered, making this a particularly useful reference work. The initial focus is on the physiological challenges of diving and on diving behaviour in general. Following chapters systematically review different aspects of physiology in mammals, including humans, and birds that dive.

The author's other role as a clinical anaesthesiologist provides additional authenticity to the final chapter, which considers biomedical applications – here, for example, the comparative functions of lung surfactant are described and range from what is known in premature human infants to what is unknown in deep-diving emperor penguins.

Early on, the author acknowledges a slight bias towards his primary interests in cardiorespiratory physiology, oxygen store management and tolerance to extreme hypoxia and pressure, but this is a bonus rather than an issue.
The book is eminently readable, so is accessible to a broad audience, and the numerous tables and black-and-white illustrations are helpful.

Overall, this text is highly recommended – not only is it interesting to dip into, butit is also a serious, academic and comprehensive survey of the field.