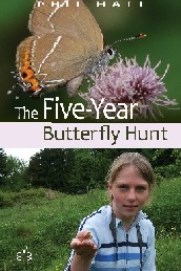 There have been attempts to spot all of Britain's butterflies in a year before, which is quite a feat, but this book is about a father and his two children's exploration of the country to photograph the 58 breeding species.

The text is light-hearted and chatty, drawing on the vagaries of the British weather spoiling adventures into the countryside, or missed opportunities in finding particular species, whether it was up a mountain or in a lowland bog.

I don't think the author would have succeeded in his pursuit without the help of the National Trust and Butterfly Conservation and its local butterfly groups, which guided this amateur lepidopterist to certain prime locations to find particular species.

In fact, it is apparent that so many of the British butterfly species are maintained in nature reserves, which speaks highly of nature conservation organisation in Britain and the parlous state of the agricultural desert outside protected areas.

The text is also full of the author's pursuit of a lady friend, who became his wife during this adventure through Britain over five summers.

An interesting read, it is suitable for a train journey of a couple of hours, but there are no colour photographs of butterflies to entertain the reader – a field trip is needed to see the real thing. Pictures of habitats and butterflies are all in black and white.

A list of good places to spot butterflies is included, as well as a checklist of species and some further reading.