The Sensory Ecology of Birds 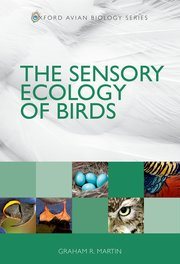 This is the third volume in the Oxford Avian Biology Series. Each is written by authors recognised for their relevant research, with Volumes I and II focusing on avian invasions and interspecific competition in birds respectively.

Volume III is the first integrated synthesis of how birds sense the world from an evolutionary and ecological perspective. Chapters 1–4 give a broad overview of the limits and flexibility of senses, how the sensory capacities vary widely in different species and how their adaptations are driven by the demands of the environment.

Chapters 6–9 deal with how senses have been designed according to the physical properties of the habitats that are being exploited – for example, it explains why the cornea is flatter (low refractive power) in birds that feed underwater, such as the penguin; and why nocturnal species such as oil birds, who live in caves, use sonar and olfaction.

The text is well supported with appropriate graphs, diagrams and photographs, both in colour and black and white, and is a valuable resource for researchers, with almost 30 pages of references. The book has clearly been written by someone who is passionate about his subject and is eager to excite others using good, clear science with poignant examples.

As Martin says, "the world of each species is unique", and as you read this fascinating and addictive text, it becomes obvious that our perception of the world is very different to that of birds.