The Neuroscience of Psychotherapy: Healing the Social Brain (Third Edition) 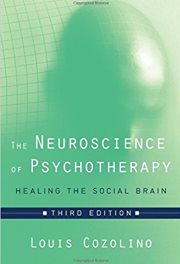 One of the most significant revelations in human biology in recent years is that of brain plasticity. The dictum that we are all born with all the neurons we will ever have has been eroded by this burgeoning area of research. At the same time, answers have begun to appear to questions about what psychotherapy is really doing to brain physiology and even anatomy.

The foundation of Cozolino's approach is neural networks, which will interest any biologist, although the book is really aimed at psychotherapists. The principle of 'use it or lose it' applies to neurons, especially to their connections. A neuron that is stimulated to fire reinforces its connections; one that is left alone loses them. Hence signals from the environment trigger real structural changes in the brain. The author argues forcefully that psychotherapy has the aim of doing exactly this and cites a huge body of research in support.

Cozolino relies heavily on research using functional magnetic resonance imaging (fMRI), but I could not find any discussion of the 'false positives' controversy that has surrounded these studies. (Not even the 'dead salmon study', which famously illustrated the problems of fMRI analysis by finding 'responses' to certain questions put to a dead fish.)

The evolutionary background will also interest non-specialist biologists. Much of what the brain now does, driven by its structure, was embedded by evolution as advantageous in early societies. Some of these activities are not helpful in modern social groups, according to the author.

This is a long book and, while the writing style is engaging enough, the density of the text is largely unrelieved by graphical displays. I also did not like the use of author-date referencing. This breaks up the text with sometimes nearly three lines of references and makes looking up citations much more tiresome than a numbered system. The referencing of sources in tables is even more irritating, although the saving grace is that there are not many tables.