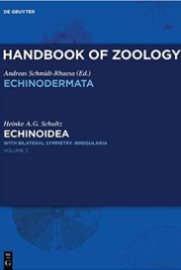 Sea urchins can live on the surface of the sea bottom from the high tide line down to several kilometres' depth. Those in the shallows tend to have thicker tests (hard shells) than those in deeper water.

Urchins all have spines, but many species lose these easily after their death, so look quite different if washed up on beaches. Live urchins can be almost any colour, from red, purple or black to brown or green, but most are white when their spines are lost.

Irregular urchins can be almost rounded, flattened or quite cushion-shaped, heart-shaped, bottle-shaped or very elongated. This tremendously detailed, well-illustrated and well-referenced book covers all these variations, and clearly describes identifying features of all known extant species, with information about the animals' behaviour and biology if known.