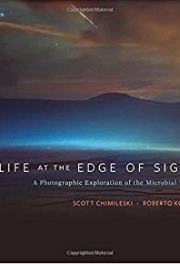 Much has been done in the UK by scientific societies, including the RSB, to promote understanding and interest in the beneficial and harmful actions of microorganisms.

I was encouraged to study microbiology by reading The World of Microbes edited by Albert Delaunay in 1965. Life at the Edge of Sight is a worthy successor of that work. It has 223 stunning pictures and micrographs, most of which could be framed as works of art. It also has a good narrative on a range of topics with some controversy discussed, including the discovery of streptomycin by the doctoral student Albert Schatz, which resulted in a Nobel Prize for his supervisor Selman Waksman.

Many of the activities discussed and photographed are those of microorganisms in the natural environment, such as Yellowstone National Park. However there is a strange set of references for further reading with little mention of some of the pioneering microbial ecologists, such as Tom Brock.
This book helps one visualise the power and potential of microorganisms and I recommend it most strongly to scientists and lay people alike.