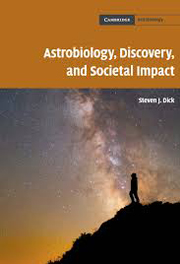 An evocative front cover indicates the nature of Astrobiology, Discovery, and Societal Impact, looking at what would happen should humans discover life other than that on Earth.

The author asks if humans can move on from thinking ‘life’ must be as it is known now on this planet, because maybe life is out there but very different. The chapter looks at fundamental life types on Earth, where carbon is the scaffold upon which all life is built. But what about life beyond our preconceptions of what life must be? The author says humans need to move their mindset beyond what is known.

The book is divided into three parts, with chapters covering ideas such as the impact on society when non-Earth life is confirmed and how we might embrace the knowledge of such life. One factor in accepting other life is to stop thinking of the universe as a purely physical thing and move towards the concept of a ‘biological universe’.

The author introduces the inevitable factor of religion in chapter seven and all the ramifications of knowing that neither humans nor planet Earth are special creations. Naturally, the impact of finding life elsewhere in the universe could be greater for the religious person than those who have no beliefs.

When other life is confirmed, which laws would be valid? Would there be ‘metalaw’, which is universal in meaning and breadth. These issues are discussed under the wonderful heading ‘Astropolicy’.

Much of the book is reflective, putting forward what has been known and expressed before, and analysing that in light of new knowledge and acceptance of the possibility of extraterrestrial life.
If you are prepared to open your mind and get away from anthropocentric views, take this book and explore the actions already taken by governments for when the big day comes and we find out we have extraterrestrial neighbours.