Immersion: The Science And Mystery Of Freshwater Mussels 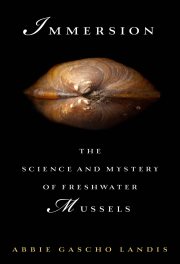 Abbie Gascho Landis possesses the relatively rare ability to combine storytelling with good scientific delivery. These skills are acknowledged with her BA in English and a doctorate in veterinary science. In Immersion, she has managed to weave her fascination with and attraction to these animals, “clueless victims of their environment”, into a web of scientific facts, observations and research.

At times, the text tends to anthropomorphism, especially when discussing their life cycle. As she was four months pregnant when initiated into the world of this bivalve, when her maternal and caring instincts were peaking, her admiration for the mollusc is understandable.

The 10 chapters cover many aspects of freshwater mussel diversity, including the 300 North American species of which at least a third are endangered, and the pressure being inflicted on them by the irresponsibility of humans. Threats loom in the form of both physical activity, such as dredging and damming, and chemical pollution from pesticides, fertilisers and pharmaceuticals.

The mussel is not always a culinary delight – the young are tasteless and the older ones tough – but they were exploited from the late 1800s because of the occasional pearl, and then later for their shells, from which pearl buttons were cut.

Freshwater mussels should be respected as excellent indicators of the health of rivers: they live to a good age and they grow according to the conditions at the time, making their shells historical records of river habitats.

The descriptions of the research being carried out are particularly fascinating, especially those involving the bivalve life cycle. The mussels depend on fish for completion of their cycle, with each species exhibiting different behaviours when subjected to drought conditions.
Landis, nurtured by the dedication of her husband, enables the reader to enjoy a less-clinical delivery into the realm of the family Unionidae.