The Tangled Tree: A radical new history of life 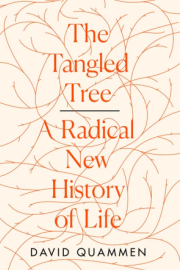 To a person already interested in molecular evolution, The Tangled Tree is a gentle and thorough history of life on Earth and how molecular phylogeny has changed our understanding of evolution. It sweeps through many familiar species and names, but I also found new anecdotes even for those organisms I thought I knew well. There are also chapters on scientists whose work I was unfamiliar with – particularly in the sections on the chloroplast, which offered an interesting new perspective.

The author focuses on the work of microbiologist Carl Woese, famous for defining the kingdom Archaea in 1977, linking research by others to this central work. This creates a narrative and a human plot, but also means that the threads of the story get a little tangled in places – much like the phylogenetic tree concept that the book discusses. The repeated connections back to Woese also limit the involvement of others who have relevance to the key questions.

Towards the end of the book, Quammen highlights that the concepts of the individual, species and tree have all been disrupted by the work covered, which feels like a fair statement.

However, when pulling together the final set of ideas, he does not include elements that do still hold together. For example, the gene as the unit upon which natural selection acts, rather than a whole composite individual (despite referring to Richard Dawkins’ work earlier in the book).

I’m pleased to have read this book and would recommend it to anyone who enjoys a historical perspective on science. It neatly covers the background to an interesting and relevant part of modern biology.