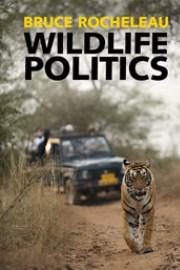 Science is just one of the factors that shapes conservation priorities and guides conservation actions.
Attitudes and values play a large role in determining what conservation achieves and how it does this, and Wildlife Politics explores the effect of diverse outlooks on policies and resource use.

The creation of wildlife policies invariably involves struggles between different values, and changing outlooks add to the complexities. The number of birdwatchers is increasing, for example, while hunting is on the decline in many areas. The balance of power can lag behind the changing attitudes, as can the law. This is very clear in the laws mandating the presence of hunters and trappers on boards of US wildlife agencies, for example.

Outlooks are also changing within the conservation community. Priorities are expanding beyond protected areas to include modified habitats, with a growing acceptance that pristine nature doesn’t exist. These changing outlooks continue to lead to a clash of values – the debate around non-native species, for example, divides many conservationists. Such debates become ever more complex in a changing world: should we still protect red wolves that have gained coyote genes through interbreeding? What protection should be offered to wild horses? Is there an optimum population size for predators?

Wildlife Politics is an impressive summary of many of the social and political issues that shape conservation. The primary focus is on the US – particularly where government structures and specific policies are concerned – but there are many case studies from around the world. Some of the case studies have received a great deal of attention elsewhere, but it is rare to see the diverse aspects of wildlife politics gathered together in this way.

The book’s intention was to collate information from different sources, and this was reflected in the way it was written. Information is often reported rather than synthesised, including through direct quotes from other texts, which can make it hard to read at times. However, this will be a valuable resource for those interested in wildlife politics, wherever they are in the world.