The Atlas of Disease: Mapping Deadly Epidemics and Contagion from the Plague to the Zika Virus 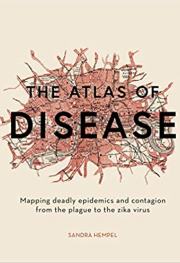 This is a lavishly produced and beautifully illustrated coffee-table book firmly ensconced in the ‘public understanding of science’ genre. The author, Sandra Hempel, an esteemed medical journalist, discusses infectious diseases of public health significance, past and present (and no doubt future). These comprise those caused by viruses such as polio, influenza and HIV/AIDS; bacteria such as syphilis and tuberculosis; and protozoa, exemplified by malaria. Their global dissemination via air, water, vectors and direct contact is outlined through a mix of anecdotes, statistics, images and maps. Most maps relate to the spread of one disease or another in a historical context, while a few maps consider the current situation.

Overall, this is a pleasingly written lay person’s primer to disease epidemiology, as well as a gentle introduction to the social and cultural history of medicine. Yet it is not an up-to-date and comprehensive compendium. There are several debatable statements – for instance, that four species of plasmodium infect humans (there are probably six). The most significant vector-borne viral disease of the present day, dengue, is a curious omission.

Metabolic diseases such as coronary heart disease, stroke and diabetes receive no mention. Perhaps the prevalence of inflammatory bowel disease among different societies worldwide holds less visual appeal for an atlas than the transmission of zika or yellow fever, viruses whose changing range reflects the geographical distribution of their mosquito vectors. Thus the title is a misnomer and rather misleading: ‘An Historical Atlas of Infectious Diseases’ would better represent the content.