A Theory of Global Biodiversity (Monographs in population biology, 60) 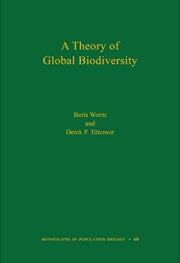 We are all too familiar with the spectrum of models that are used (politically) to account for planetary climate change or predict future human global population levels. Theories that can be used to interpret and predict patterns in the variety of living organisms on Earth are less well known. Most undergraduate biologists will be aware that species richness tends to increase at lower latitudes and altitudes, but are unlikely to understand little beyond that.

Through analysing data from marine and terrestrial ecosystems, the authors illustrate how underlying principles can help produce a unified framework that can be used to explain and predict in greater detail regional variations that do not adhere to the simplified trends mentioned above.

Temperature and productivity have previously been proposed as drivers for evolution. Worm and Tittensor combine these drivers with another driver of community size to build their theory, founded on empirical data. They classify four broad habitats as terrestrial, coastal, deep ocean and pelagic, and similar biogeographic distribution patterns are revealed within all these in species ranging from mammals to microorganisms.

The text begins with background information and some of the limitations of earlier work and theories that were largely based on plants and in a limited range of locations, such as island biogeography. The authors then present their observations from a wide range of biodiversity database resources for each of their defined habitats. A neutral theory is developed including factors such as habitat area and productivity. The theory’s predictive power is tested for a variety of families and species groups in the four defined habitats.

The need for a clear understanding of the mechanisms that underpin biodiversity patterns is paramount for conservation planning. As such, this accessible volume should be essential reading for conservation policymakers as well as academics working in this field.