Primate Research and Conservation in the Anthropocene 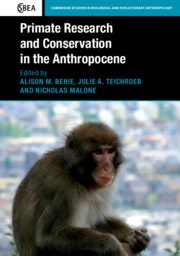 Just over half a century ago the former president of the International Union for Conservation of Nature, François Bourlière, wrote: “As we are becoming aware of the uniqueness of Primates… we are also realising how precarious is the future of Primates”.

In the foreword of Primate Research and Conservation in the Anthropocene, Colin Chapman highlights just how precarious that situation is now, with 60% of primate species threatened with extinction.

The causes are largely due to familiar human behaviours and actions including deforestation and the bush-meat trade, along with some direct and indirect effects of climate change. However, this book gives good reason for cautious optimism, as it documents challenges that have been tackled and successes that have been celebrated to combat the decline of primates. There is a growing body of academic research and conservation projects, as this volume clearly illustrates.

The chapters include reviews, specific case studies, regional perspectives and projections of the impact of global environmental and local biotic changes such as climate change, available diet or nutritional ecology. Each chapter opens with an outline of how the researchers and workers were drawn into primate conservation, which gives inspiration to future students considering this relatively young vocation.

Throughout this book there is an emphasis on the importance of collaboration between researchers from different backgrounds and local communities, and the countries in which they are working.

One reservation I have is the use of the term ‘Anthropocene’ in the title. This term is increasingly found, and defined as an epoch, in popular conservation and sustainability literature. This work, however, is focused on a far shorter geological period than an epoch: maybe a more alarmist yet apt title could be ‘Research and Conservation to Prevent a Catastrophian Age’.